And now in Canada - with the interview here
... and a full report here:

A wildflower meadow that was being watched for David Attenborough's Big Butterfly Count has been destroyed after a council worker mowed it down.

'It's a real shame because the park itself is a beautiful part of Sidmouth,' said butterfly lover Ed Dolphin 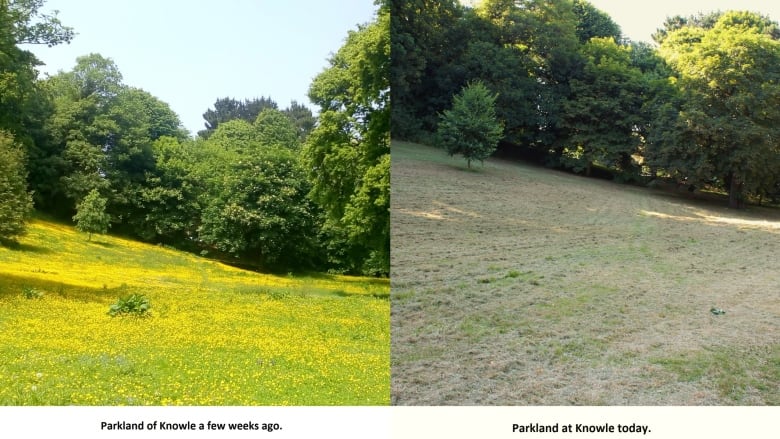 The before and after photos of the destroyed meadow at The Knowle, in Sidmouth, Devon. (Submitted by Ed Dolphin)


Listen5:53
It was a beautiful, lush meadow — bursting with a variety of vibrant flowers and teeming with butterflies. But now, according to Ed Dolphin, it looks like "a grey desert."
Every day, Dolphin would walk his dogs through the scenic meadow at The Knowle, in Sidmouth, Devon.
He had been keeping track of the butterflies for Sir David Attenborough's Big Butterfly Count — a national survey that asks the public to spot and record different species of butterfly.
But recently, when Dolphin arrived at the meadow, he found that it had been destroyed. To his horror, he learned a local council worker had accidently mowed down the entire meadow.
Dolphin spoke to As It Happens guest host Piya Chattopadhyay​ about the accident and what it means for the populations of butterflies that lived in the meadow. Here is part of their conversation.

Mr. Dolphin, can you describe the moment when you realized something had happened to this meadow?
I was horrified and upset because the day before I'd been walking through it and there was a lovely flower meadow full of butterflies. And then I was presented with, well, a grey desert, basically 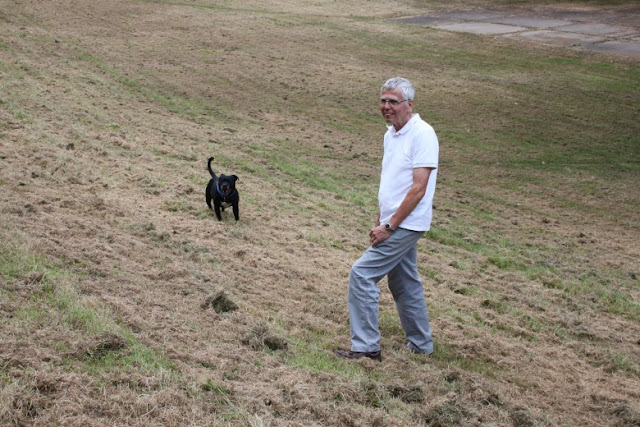 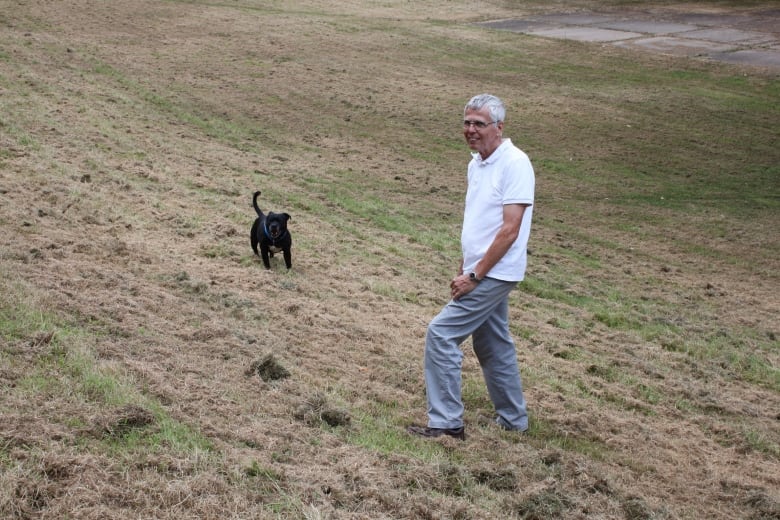 Ed Dolphin is an amateur conversationalist and treasurer of the Sidmouth Aboretum. (Submitted by Ed Dolphin)
And before this incident, when the meadow was lush and beautiful, how many butterflies would you see on a daily basis?
While walking my dogs, I'd say at least 30 or 40, just in a short walk across it. About eight to 10 different species each day.
And how many are you seeing now?
Two or three, and all of the same species. There's only one species left. It's quite sad now, compared to what it was. Because to be able to walk through and just have butterflies flying around you all the time is very pleasant. But butterflies and other insects in England are all under pressure. There's been an enormous decline in butterflies in England in the last 30 years. 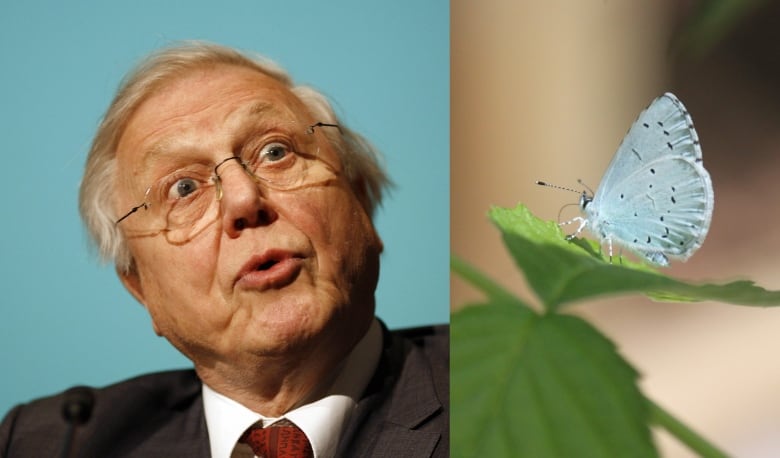 In a statement, the East Devon District Council said, "We regret that one of our operatives misunderstood the instructions he was given and cut the area by mistake, instead of just cutting some pathways and a flat area to help those using the park for walking through."
They added that this shouldn't have happened and they'll take extra measures that this doesn't happen again next year. What do you think of their response?
The first thing is this is the second year they've done it. They did it last year, and I complained last year but nothing happened, and it's happened again this year. So hopefully the amount of fuss that's been generated through the national media in England means that next year they will be much more careful.
The meadow should be cut. To manage a flower meadow you do need to cut it. But you need to cut it at the end of August, not the end of July, because a lot the wild flowers were still setting seed. Those seeds now won't be set so there will be fewer seeds the next ear.

You were counting butterflies here for David Attenborough's Big Butterfly Count. What has been lost now that you can't do that?
I can say what I know was there before. But to do it properly, I'll have to go and do it somewhere else. But the Big Butterfly Count is big. It's a citizen science project, whereby hundreds of volunteers all over the country, go out for a certain period of time and just record the butterflies that they see.
As I say, butterflies are under pressure in Britain, so the Butterfly Conservation Organization, along with David Attenborough​, are trying to get some hard data as to what there is about this so they can keep a record. 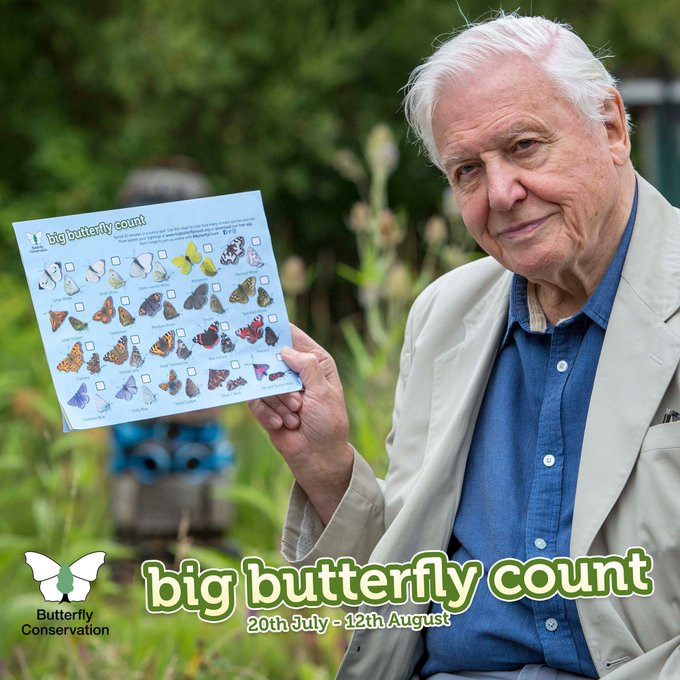 We need your help to spread the word - The Big #ButterflyCount has started! Please retweet so we can make 2018 the biggest count ever! http://www.bigbutterflycount.org  Download the app or free chart to help Sir David Attenborough save butterflies.

And so without being able to count the butterflies in this, now former meadow,  what effect will that have?
One reading out of thousands won't effect the Big Butterfly Count. But it's not so much the number of butterflies. It's the range of species. There were 10 different species of butterflies readily seen in that parkland meadow beforehand and now we're down to one.
It's a real shame because the park itself is a beautiful part of Sidmouth. We've got a lot of citizens in the town who are very keen on environmental matters.
Compared to when I was a child, there is a fraction of the butterflies about in the summer in England now. There's a bush called a buddleia, which is called "the butterfly bush" in England, because, when I was child, if you had a buddleia in your garden you would have it covered in butterflies for the whole of June, July and August.
Now, if you see buddleias, you don't see any butterflies on them. They are becoming rare, which is a bit of an indicator of just how our environment is being degraded.
Written by Samantha Lui and John McGill. Produced by Samantha Lui. Q&A has been edited for length and clarity.