As this piece from Reuters points out:

LONDON (Reuters Breakingviews) - Ask almost any resident of London or the San Francisco bay area about the price of housing, and you can expect a diatribe. The most common conclusions are that everything is too expensive and only massive construction can solve the problem. That’s not quite right. 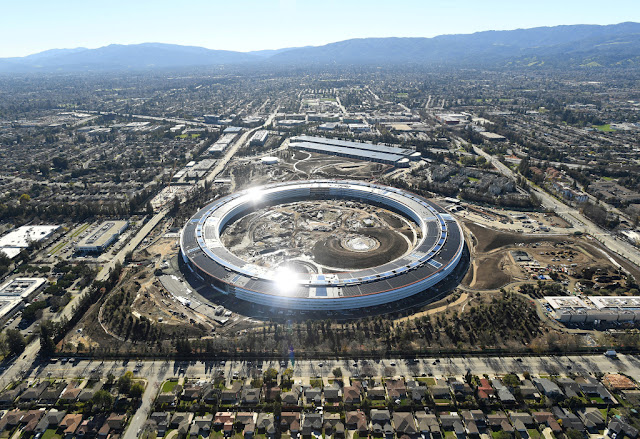 The Apple Campus 2 is seen under construction in Cupertino, California in this aerial photo taken January 13, 2017. REUTERS/Noah Berger

For most goods and services, the simple analysis would make sense. If the price of hogs rises well above the cost of production, the farmers are happy. The swinish thing, though, is that they will probably decide to breed more pigs. The result is usually lower prices and less profit per pig.

This hog-cycle story of supply and demand is just about lesson one in microeconomics, and it more or less works out in many industries. Housing is not one of them.

Money is what makes housing economics differ from the porcine variety. In particular, the money that economists stipulate is paying for the land under the actual residence. This is the portion of the price that is in excess of the cost of construction. In other words, what pig farmers call profit, property economists call imputed land-value.

The rising cost of land has been responsible for almost all the recent changes in the inflation-adjusted price of residential housing. To be exact, it accounted for 81 percent of the total increase in 14 countries between 1950 and 2012, with rising construction costs taking up the rest. That calculation comes from a remarkably thorough 2014 study by Katharina Knoll, Moritz Schularick and Thomas Steger for the Federal Reserve Bank of Dallas.

Land-money and pig-money are very different, because there can be a lot more of the former. As long as overall prices are not rising much, the money paid for pork comes out of a fairly rigid total supply – more money for bacon means less for eggs.

For the land part of housing prices, the constraints are nowhere near as tight, because so much of the money that goes into purchasing land is created especially for that purpose by banks, through mortgage loans. In effect, while the actual buildings are a durable consumption good or a physical investment, land is a financial asset, like stocks, bonds and original art.

The price of such assets has little to do with normal economic value and a lot to do with how much money buyers can and want to spend on them. The larger the available supply of money for purchases and the greater the enthusiasm, the higher the price will be. For art, the sky is the limit. For housing, the rising stops when renter or mortgage borrowers cannot or will not pay more.

Lower interest rates sometimes encourage farmers to increase borrowing to enable more sows to do their thing. But that is nothing in comparison to what they do for homebuyers, who generally look at their monthly outflows, not the sticker price. However, price-inflating money for housing can come from some other sources. In Hong Kong, for example, the main spur to rising values has been the flow of otherwise idle money seeping out from the People’s Republic.

Thanks to all this monetary flexibility, changes in physical supply have a much smaller effect on the price of housing than of pigs. Between January 2000 and February 2005, the average U.S. house price increased by 79 percent, according to the Case-Shiller index, despite a 35 percent jump in the annual rate of new housing starts.  In the most recent five years, prices are up 31 percent while the rate of construction rose by 40 percent.

The price gains would almost certainly have been even larger if the same amount of money had been chasing a smaller supply. After all, the average price is the ratio of the money spent on housing to the number of housing units for sale. Additional construction increases the denominator of that fraction.

Conversely, house prices in London and San Francisco would almost certainly be lower if planning or zoning restrictions did restrict new construction. How much lower? The drop might be substantial, if a building boom not only added new houses but also calmed the ardour of lenders and speculators. Then the numerator of the key ratio would fall while – and because – the denominator was rising.

Because the influence of the money supply on housing prices is so great, trends in those prices do not always give clear indicators of how many new residences should be built. Concerned policymakers would do better to look beyond price to non-monetary indicators gauging quality of residential life. Possible indexes include rates of population growth, average age of housing, space per resident and typical commuting times.

While policymakers are thinking seriously, they might also worry about the effects on social cohesion of a flood of money into the housing market. After all, housing price booms inevitably widen the gap between haves and have-nots – firstly between owners and renters, but also between comfortable pre-boom buyers and struggling newcomers.

Increasing the supply of housing can help to narrow the gap, but houses are not like pigs. So long as the money keeps flowing in, the effects of new supply on prices will be modest.