Monday, July 20, 2009
THERE seem to be more people in favour than against the concept of a Tidal Reef scheme for Sidmouth.
In response to the revolutionary tidal power scheme; which would also protect Pennington Point, that was revealed in the Sidmouth Herald on July 3, Aaron Palmer, on work experience with the paper from Sidmouth College, spent Friday morning talking to residents and tourists on the Esplanade to get their views.
These are his findings:
Harry Scott, a visitor to Sidmouth, said other reefs that he had seen had worked successfully and that this proposal was a good one.
"I would only agree on the idea if local people were involved in making the decisions," said Mrs Palmer, a resident of Sidmouth.
Jo Frith, a member of the Vision Group for Sidmouth, is championing the concept, which was developed by Evans Engineering.
The reef would have minimal visual impact as it would be located off the coast and could produce electricity by wave power. It could also protect the town from potential flooding.
Salcombe cliffs, which remain a big part of Sidmouth's history, "need to be protected", said Mrs Alexander, 43, who is a regular visitor to Sidmouth.
Mrs Hadland thought it was a good ecological proposal if it preserved people's homes and produced electricity.
Catherine Osbourne said it would be "another side" to Sidmouth and offer a different aspect, while visitor Basil Nunn said: "Something needs to be done."
Some residents however, are against the proposal of the reef because although Pennington Point may be protected from erosion, other parts of the Jurassic Coast may be affected by the project.
"Views will be disturbed" said a passing visitor near Jacob's Ladder, and a long-standing resident of Sidmouth added: "Nature will always win."
Mrs Preston from Sidmouth agreed and thought it best not to disrupt nature and worsen any cliff erosion.
While Peter Hook, who runs the seafront's Royal York and Falkner Hotel, thought the project was "pie in the sky".
*What are your views? Have your say on our forum page at www.sidmouthherald.co.uk  . 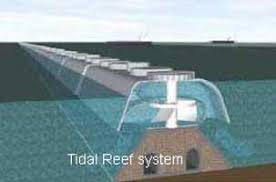