This campaign is now 5 years old:


The green new deal is the antidote that UK desperately needs

Five years after it was first proposed, the deal is relevant now more than ever. So why are politicians dragging their feet? 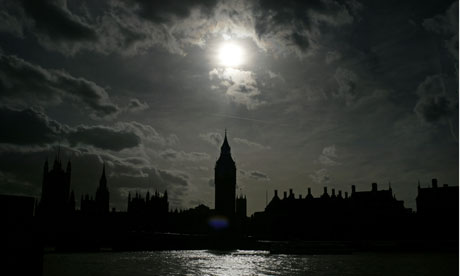 This season's 'look' for recovery is poor, insecure, indebted and polluting. But it is still not too late for the UK parliament to correct mistakes. Photograph: Dan Chung for the Guardian
What does a recovery look like? On current evidence it involves an increasingly divided workplace with more people, especially the young, caught in low-paid, insecure employment.
A matching economic accessory comes in the form of spiralling consumer debt, with rising reliance on overdrafts, credit cards and pay-day loans. And the UK's carbon emissions are rising.
So that's this season's "look" for recovery: poor, insecure, indebted and polluting. If based on debt-fuelled consumption and misery-making employment conditions, the term recovery is at best loose, like applying the word reform to any proposal at all to change public services, no matter how damaging. Where rising emissions are concerned, the recovery is rather like a lung cancer patient getting just well enough to start smoking again.
This is what we've gleaned from five years' worth of reflection and learning since the collapse of Lehman Brothers, even though it revealed a fundamental flaw in a system which everyone (or at least all those star-struck by high finance) believed explained how the world really worked.
In 2008 I was part of the group which published the green new deal. Over 12 months a combination of extreme weather events, high and volatile oil prices and the emerging banking crisis had created a perfect economic storm. The green new deal was designed with broad and positively self-reinforcing policies. It would render safe and re-purpose the banking system, invest in a low-carbon makeover of the UK economy, create good jobs and increase energy security.
Five years on, we believe it is still, by far, the best and most commonsense plan for the UK economy. Next week we will publish a revised update on its fifth anniversary. This new national plan will show how we can make sickly, much-abused economic shoots into healthy green ones.
How badly is it needed? Ask anyone on a low-paid, zero-hours contract, or someone enslaved to the payday lenders; or anyone who cares about the prospect of their children growing up in a world gripped by worsening climactic upheaval.
In the recent frenzy to further deepen our dependence on fossil fuels, there is an almost maniacal resistance to accepting the reality of global warming, and an equally wilful blindness to the positive opportunities offered by economic redesign.
A rush to reprivatise the RBS bank (only saved by public largesse at the height of the financial crisis) rests on a doctrinal belief – comprehensively disproved five years ago – that private, self-interested markets in finance are best for everyone. That's bad enough, but it has blinded government to the possibilities of it changing the bank's structure and lending priorities. For example, if broken up into German-style regional landesbanks, it could better serve useful businesses. Similarly, given a new mandate to lend to low-carbon sectors, it could help future-proof the UK economy.
Instead there is a grim determination to return to old ways. And, taking account of the scale of RBS's financial support to fossil fuels around the world, one estimate gives the bank a carbon footprint bigger than the whole of the UK.
Norway is famous for sensibly investing income from its fossil fuels. The UK, in effect, used the proceeds from North Sea oil and gas to bankroll high unemployment in the 1980s. Norway's oil fund (known as a sovereign wealth fund) is now vast, totalling three-quarters of a trillion dollars, and a debate is raging over its reform in the run-up to Norwegian elections next week.
Unfortunately, the debate centres not on the good that can be done with a sum several times larger than the annual, global aid budget – but on where it can get the best return. Given it's a small country and already well-off, and that the fossil fuels once burned will have worldwide impacts, Norway could almost singlehandedly fund a global green new deal and show leadership by leaving in the ground those remaining reserves which it is not safe to burn.
Why not mark the anniversary of a failed financial system with action in advance to prevent the failure of our environmental one, and do the economy a favour at the same time. Then we would have a recovery worthy of the name.
The green new deal is the antidote that UK desperately needs | Andrew Simms | Environment | theguardian.com

The global economy is facing a ‘triple crunch’. It is a combination of a credit-fuelled financial crisis, accelerating climate change and the looming peak in oil production. These three overlapping events threaten to develop into a perfect storm, the like of which has not been seen since the Great Depression. To help prevent this from happening, and to lay the foundations of the economic systems of the future, we need a Green New Deal.
There is still time. Act now and a positive course of action based on the framwork set out in A Green New Deal can pull the world back from economic and environmental meltdown.

Discussion paper: Help save Europe with a Green New Deal

A call to action from the Green New Deal Group.

Briefing: Turn the ‘Green Deal’ into a Green New Deal

The first step to saving the economy: a call to action from the Green New Deal Group.

Green New Deal Group calls for a ‘Great Tax Parachute’ as alternative to spending cuts, to save the public finances and give the economy a soft landing.

Two days ahead of the pre-budget report, and as the UN climate change talks open in Copenhagen – the second report from the author’s of the original Green New Deal says that the Chancellor is likely to miss a historic opportunity to tackle public debt, create thousands of new green jobs and kick-start the transformation to a low-carbon economy.
The Green New Deal
.
.
.
Posted by Jeremy Woodward at 15:24