March in Fention - protest against overdevelopment - Saturday 11th January - 11am

Feniton is under a lot of pressure:

This is very much a test of the National Planning Policy Framework (NPPF)
- and its"presumption in favour of development":
Futures Forum: Devon County and national planning policy: "The NPPF has been sufficiently poisonous a development that 38 Conservative MPs expressed their misgivings about it as long ago as March last year in a letter to the Telegraph." 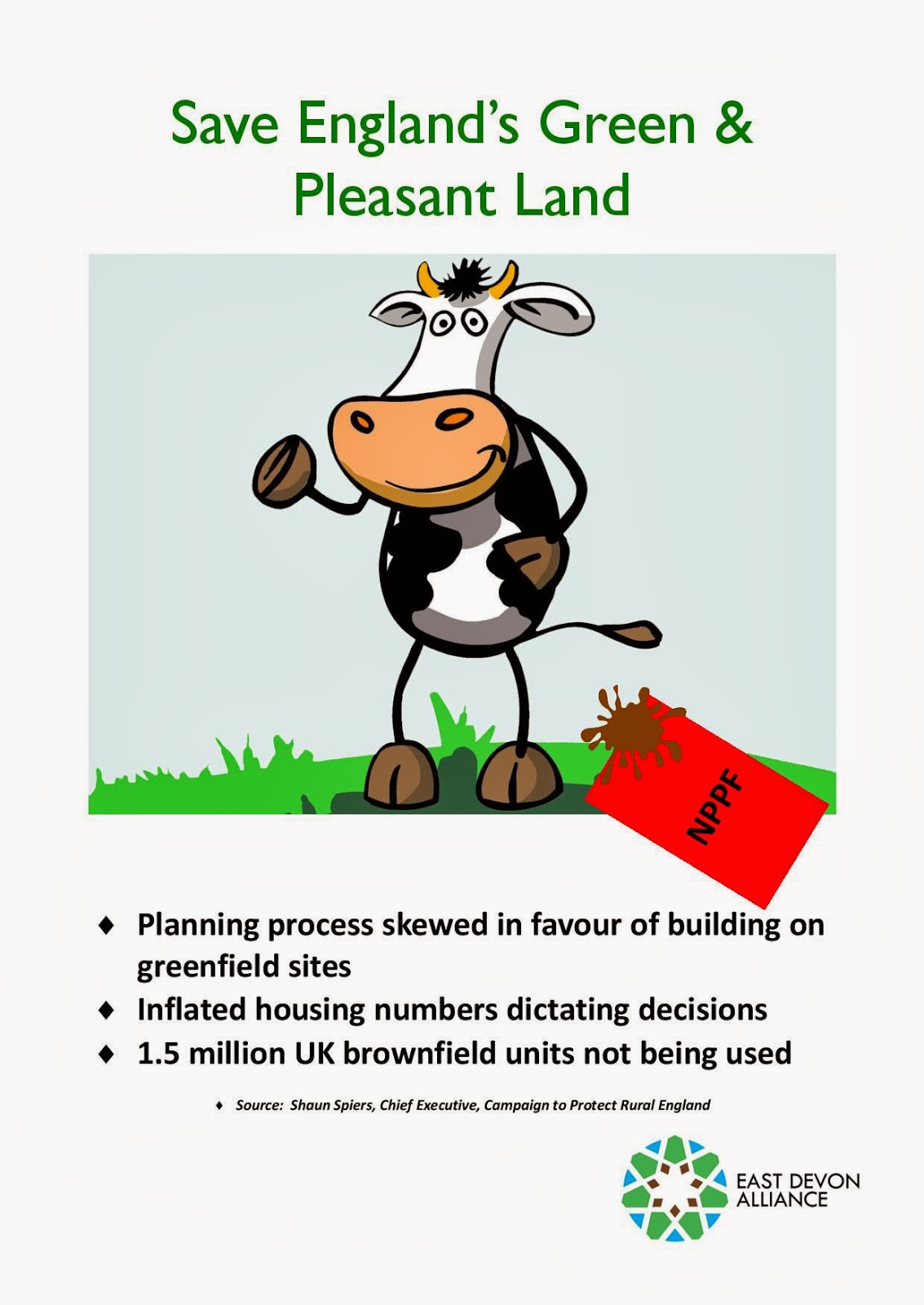 Feniton is receiving a lot of support:
Sir Max Hastings supports Fight for Feniton’s Future | Sidmouth Independent News
Sir Max Hastings sends his support to East Devon’s Mass Marchers | Save Our Sidmouth
and has done before:
How local democracy is being crushed under the jackboot of the Government's Mr Concrete | Mail Online

Posted on January 6, 2014by susiebond
The following press release has been issued by the East Devon Alliance ahead of the start of the Super Inquiry into mass development in the village of Feniton.

Sir Max Hastings, in a message to the organisers of next Saturday’s protest march against massive new housing developments in the East Devon village of Feniton, has said that ‘Feniton’s campaign represents the struggle of us all for the rights of local communities to decide their own future and for the English countryside. Best wishes and good luck’. The local MP, Neil Parish, will be in attendance.
The march, commencing at 11 a.m. on 11 January, in the village, is expected to attract a substantial number of local residents and others from East Devon who are appalled at plans for massive and disproportionate developments in the area. The District Council proposed an increase of five per cent for Feniton over the next 12 years but current applications, from three developers, imply an expansion of 42 per cent in months. The East Devon Alliance believes that such an increase would cause difficulties in the infrastructure and increase fears of flooding.
Indeed, John Withrington, the chair of Fight for Feniton’s Future, noted ‘the folly of allowing unfettered developments of this sort has been demonstrated vividly in the last few days, when, once again, Feniton suffered from severe flooding with raw sewage flowing in our streets and into private property’.
The march will start from Louvigny Close (opposite Feniton village school). As Feniton exemplifies the plight of towns and villages across the whole country, exacerbated by the National Planning Policy Framework (NPPF) which presumes in favour of development, there is wide media interest.
For further information about the event, please contact East Devon Alliance Press Officer, Jackie Green, on 07891 519906.
A Public Inquiry will be convened on 7th January at which the Planning Inspectorate will hear appeals by the three developers. The Inquiry, lasting for two weeks, will be held at the FlyBe Training Academy.
Sir Max Hastings supports Feniton protest march | Susie Bond

And this coming Saturday, there'll be a march in Feniton: 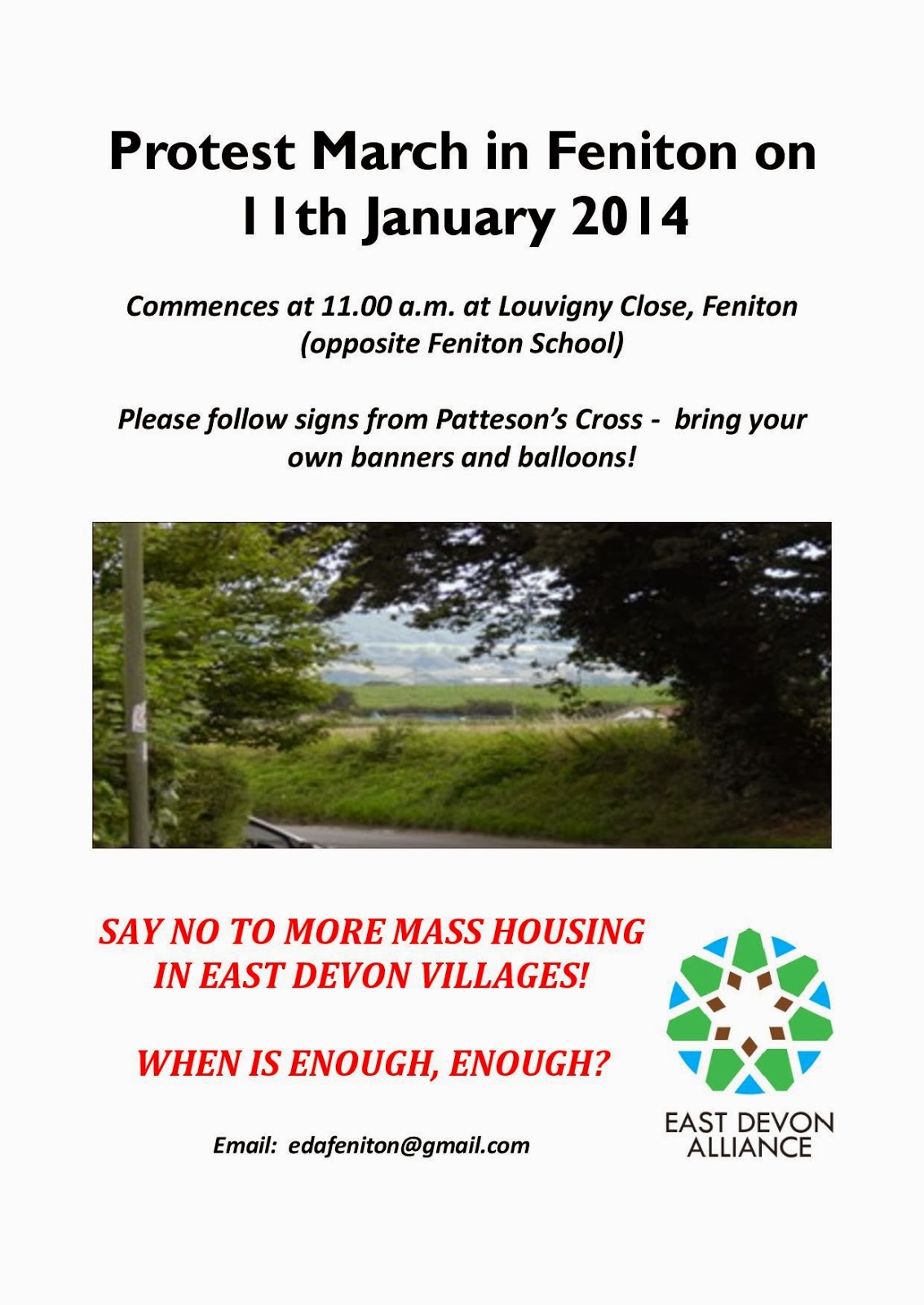