An interesting exhibition currently at the British Library charts some of the changes in lifestyle which had an impact on what the likes of Sidmouth looks like today:

Sidmouth does have some spectacular examples of Regency architecture: 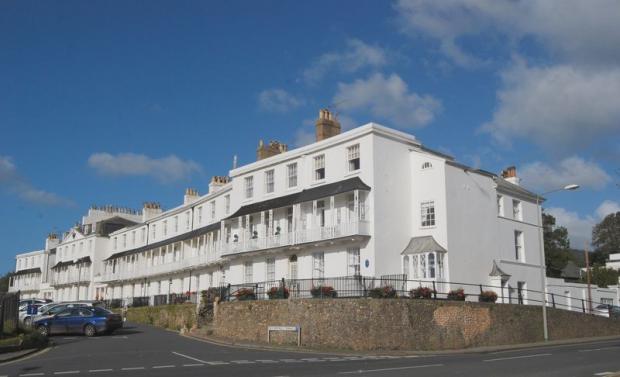 ... all within a charming setting:

... is that any new design can be accused of offering only pastiche:

The traditional Sidmouth Regency and Victorian vernacular is echoed in this sensitively designed development. Local features like balconies and balustrading are reminiscent of neighbouring listed buildings.
Home - Sanditon

The label can even suggest snobbery:

Sidmouth has retained its exclusivity and elegance since Regency times, when it became a fashionable watering place and attracted ’the people of quality’.
Luxury Devon Hotels, Hotels in Sidmouth, Seafront Hotels Sidmouth | Hotel Riviera

Although this tagline can provide a useful contrast to any revolting locals of late:

We are in Sidmouth, a sweet-natured Regency town on the south Devon coast. Externally, nothing much would seem to have happened here
Sidmouth mans the barricades - Telegraph

Two years ago, the former chair of the Vision Group challenged the Chamber of Commerce to come up with an alternative tagline for Sidmouth:

Sidmouth’s ‘regency town’ tag is holding it back and should be dropped, according to the former chair of a group trying to create a vision for its future.

Robert Crick said constant references to the Regency Period in documents from East Devon District Council (EDDC) were giving a misleading impression of Sidmouth.
Mr Crick, a former chairman and member of Vision Group for Sidmouth, said in a talk at Wednesday’s monthly Chamber of Commerce breakfast there were a lot of other things to be proud of in the town.

He asked “What’s so marvellous about the regency era anyway?”

The former university professor said the only literary reference to the town during the period is in Percy Shelley’s poem ‘The Masque of Anarchy’, where Home Secretary during the Peterloo Massacre Viscount Sidmouth is in the guise of ‘hypocrisy’.

He said there were 188 listed buildings within a kilometre of the seafront, and very few of them were built in the Regency Period.

Mr Crick said: “It’s a town full of 1930’s bungalows, and what’s wrong with that? We should celebrate the fact Sidmouth is a good place for old people to live.”

After breaking out into several verses of an ancient peasant song, he said the draft EDDC ‘Local Plan’, which sets out housing and industrial figures for the next 15 years, focuses far too much on the ‘regency town’ tag.

He said it was evocative of large seafront developments, and could be used to justify high-rise building in Sidmouth in the future, something the town doesn’t need.

The Vision Group for Sidmouth member, which was set up in 2005 to create and champion a ‘vision for the future’, said the town needs to make more use of the Jurassic Coast on its doorstep.

He ended the talk by asking the assembled business men and women of the town if they had any ideas for a new tagline for Sidmouth, which accurately portrayed its features and what it wanted from the future.

A year before a talk had been given for the Sid Vale Association - to stimulate ideas about the nature of Sidmouth:

SIDMOUTH: Is there a future for Sidmouth?

Sidmouth needs to stand up to defend its future but rediscover its grassroots, according to the chairman of the Vision Group for Sidmouth, a voluntary forum for the town's development.

Robert Crick made his call to action in his talk “Is there a future for a town with a past?” held at the Manor Pavilion last week - the first in this year’s series of Sid Vale Association lectures.

Professor Crick, former vice-chancellor of the University of Middlesex, pointed out that he was speaking in his personal capacity, and that his views should not be taken as those of the Vision Group itself.

Starting with global warming, Professor Crick gave examples of places around the world that have been devastated by the forces of nature.

Could the same fate await the little town of Sidmouth? “Look at the fate of Timbuktu, lost in the desert, or of Hallsands, inexorably eroded away by the sea,” he said.

Regarding Sidmouth’s own risk of going the same way, Professor Crick pinpointed threats to the town: from flooding to excessive new housing, to cars, all of which needed to be challenged, he said.

“Sidmouth has no town plan, no community flood plan, no planning brief for the Eastern Town, no Local Development Framework, and no Shoreline Management Plan from East Devon District Council.”

On the risk of the town flooding, he said that the Sid Vale Association played a “significant role” in having the Shoreline Management Plan adopted by the Environment Agency, only to see it thwarted by East Devon District Council.

On parking, he countered the recent, successful challenge to the proposed parking meters on Sidmouth High Street, saying “Parking meters? Yes please”, adding: “When people insist on parking overnight in the pedestrian precinct, and deliberately over-stay on time-limited parking places preventing people from stopping in town it may be time for a campaign.”

The much-used tag of “Regency Sidmouth” also came under scrutiny.
“As we embrace our past, let us also get hold of all its rich diversity and complexity.

“Sidmouth’s image should not be reduced to ‘a Regency town’ and its current role should be recognised as more than ‘a tourist industry’. The human scale of Regency architecture, the terraces, gardens and esplanade are a wonderful heritage but do we really want to shackle Sidmouth forever to a fake and partial version of the Regency period?” he asked.

On the long-awaited development of the Port Royal area at the mouth of the River Sid, he said: “Last year, a group of local volunteers with relevant expertise prepared a brief for this area; this was submitted after one year of work, but never put before our elected representatives, who had commissioned it.

“Whoever controls the EDDC agenda made it clear that they do not want a comprehensive plan nor any public consultation over alternative concepts, but seek only an opportunity to flog off the eastern esplanade for a developer to build as high and as deep as possible, without considering any reconfiguration of the surrounding area or the impact on local businesses and infrastructure.

“This is land that was originally given to the people of Sidmouth by Victorian Unitarian philanthropists but which has now been repossessed by the governors at the Knowle for short term gain.”

Turning to shops, Professor Crick was equally damning about the advance of major retail chains. To counter the chain stores, he called on the townspeople to join in the growing number of grassroots activities, including the monthly farmer's market, as well as a new woodland co-operative, which held its first local working day on Salcombe Hill last weekend.

On combating climate change, the audience was urged to see the positive side:  “How delightful our town will be when the oil runs out and extremes of weather force us to rediscover old skills and old relationships and enjoy conversations on car-free street corners and we won’t have to airbrush out the cars on pictures of Fortfield Terrace.”

Concluding with a twist on a familiar refrain, Professor Crick sounded a positive note.

“Can the people of this valley meet the serious challenges facing us? In the words of Bob, not the Banker, but the Builder: Can we fix it? Bob the Builder! Yes, we can.”

After the lecture, questions from the audience covered parking, primary schools, affordable housing, and the felling of trees.

One member of the audience said that he had “never heard such a devastating criticism of East Devon District Council”, but Professor Crick insisted that he also acknowledged the “good things” they do for the town.

“With respect to the way the future development of the town is going,” he said, “we're at fault.

“We need to be constantly vocal. We've got to think. Robert has got under our skins this afternoon – good. Sidmouth has always changed, but it needs to be in response to what the townspeople agree with.