What are the most efficient forms of energy?

The recent debate on solar farms has touched on the energy produced:
Futures Forum: Solar farms in East Devon: the approvals... and the debate...

"Nothing on earth compares to the energy potential of sunshine..." 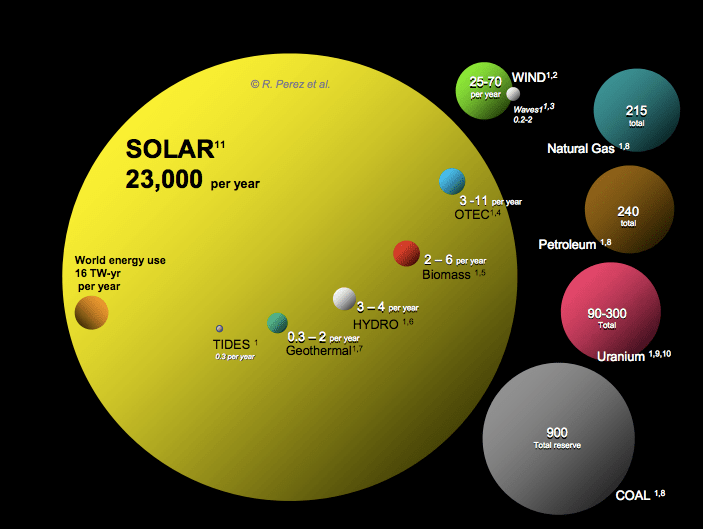 The debate on fracking has touched on the issue of EROEI/EROI — Energy Return on [Energy] Investment — that is, the number of units of energy it costs to extract a unit of usable energy from any given source:
Futures Forum: Peak Oil... and EROEI... or Energy Return on Energy Investment

"Fossil fuel from deep offshore wells, shale and tar sands has one thing in common: It’s costly and difficult to extract, bottom-of-the-barrel stuff,  worth bothering with only because the low-hanging fruit has already been picked."
Center for a Stateless Society » Reports of Peak Oil’s Death Are Somewhat Premature

There is considerable debate, however, about how to measure EROEI/EROI. This comment questions the 'energy potential of sunshine':

ERoEI boils down a whole lot of information, called the energy budget, to just one number. If ERoEI is < 1, you would think the technology is a non-starter, but if the EI is coal, and you have plenty of that, and the ER is a petrol substitute, which is in short supply, then an ERoEI of < 1 can make a certain kind of sense.   Also the ERoEI will vary for things like solar, wind and hydro, because the location of the project will have a big effect on the ER.   Also some of the EI has to be spent a long time before you get the ER - almost all of it in the case of solar PV. To boost the production of panels, you first have to build a factory, and fill it with complex machines which work in especially clean air, and vacuum chambers, and produce more bulldozers and trucks to mine the silica sand. Once set up, you would hope you are then ready for 30 years of production and the panels themselves will produce the ER for 30 years, spreading the ER out over say 3-63 years from the start of the project.   In the early years, there is a lot of EI and very little ER, so the project is a drain on the nation's energy budget, which has to be met by the very fossil fuels we want to reduce.   And if, after building your PV factory, you then build another PV factory, and another, and another, and another two, the ER will not outweigh the EI until you have built all the PV factories you need and stop building them, and then wait some more time for all the EI to be paid back. Only then does the entire project start to make an energy profit - decades down the track.   So the simple ERoEI figure can be grossly misleading.

The question seems to be whether 'renewables' can be 'efficient' at all:

An important new study in the journal Energy (Weißbach et. al. 2013, paywalled) focuses on energy return on investment (EROI, or sometimes ERoEI), which is the ratio of electrical energy produced by a given power source to the amount of energy needed to build, fuel, maintain and decomission that power plant. Here is one of the main results from the paper (higher numbers are economically better): PV=photovoltaic; E-66 is the Enercon 1.5 MW wind turbine model studied; CSP=Concentrated Solar Power (Sahara site assumed); CCGT=Combined cycle gas turbine; PWR=pressurized water reactor.
In this study, "unbuffered" is the raw generation without storage, while "buffered" includes the cost of pumped hydro storage where it is needed to buffer the difference in peaks between production and consumption (assuming, rather optimistically, that the geography is available for any amount of such storage facilities). Fueled energy sources already store energy in the fuel, so no additional buffering is needed there. The hydropower system analyzed is a run-of-river type (i.e., no dam or reservoir), which has a very favorable EROI, but would require buffering at some times of the year if deployed en masse.
A couple of important points: first, these are energy costs and outputs, not monetary costs, which can be entirely different. These numbers represent technological ability only. Second, every source shown here has an EROI greater than 1, which is break-even. In other words, each of these generates more energy during its lifetime that the energy used to make and maintain it. That's good. But note the gray area at the bottom labeled as the economic threshold. To understand how this is arrived at, we need to take a major digression.
First we need to understand that not all energy is created equal. Electrical energy is very useful, because it can immediately do work. Heat and chemical energy are less useful because it's harder to get work out of them. This introduces an important concept: exergy, which is available energy, or energy usable for work. In general a large heat-type power plant (coal, gas, or nuclear) will require 3 joules of heat energy to create 1 joule of electrical energy. Therefore it is common to weight electricity by a factor of 3 when computing the exergy of a system. (Note also that unlike energy, exergy can be created and destroyed.)
So instead of computing the raw EROI, as in the graph above, it can be more useful to consider the exergy equivalent, by weighting both the energy inputs and energy output by a factor of 3 when the energy type is electrical. Weißbach (pronounced "vise-bach") calls this EMROI, and the results are shown below. Since all these sources produce high-weight electricity as output, but not all energy inputs are electric, the EMROI of all sources is higher than their EROI. What we've done here is taken one step toward monetizing the EROI, by allowing for the greater monetary value of electricity compared to other energy types. (This gives us Energy Money Return On Investment, EMROI). A fully monetized ROI would include non-energy inputs like labor and capital, which can be very large. That means a fully monetized ROI will always be smaller than EMROI. In effect, EMROI is a theoretical "best case" scenario for monetary ROI.
But the big winners in non-fossil energy are run-of-river hydro (Weißbach allows a 100 year plant lifetime, which may be generous) and nuclear (at a 60 year plant lifetime, in line with other studies). And by the way, this is one reason Weißbach's study is better than some earlier works: he includes plant lifetime in his computations, which can make a big difference. Wind turbines, for example, are subjected to large physical stresses which limits their lifetime to about 20 years, both in this study and according to the National Renewable Energy Laboratory. In effect, you have to build a windfarm two or three times over during the lifetime of a nuclear plant, and that adds up.

Daily Kos: GETTING TO ZERO: Is renewable energy economically viable?

Whilst we indeed have the problem of 'declining marginal returns on investment'
Our Investment Sinkhole Problem | Our Finite World
it still seems that renewable energy also has high demands on investments:
Futures Forum: Energy crisis, what energy crisis? ... "Understanding Our Oil-Related Fiscal Cliff." ... But "the shift toward renewables has several difficulties..."

The shift toward renewables has several difficulties:
A comment by Jon Callahan includes a comment at the end, from Wikipedia: “Throughout the 1980s revenue from the 90 per cent tax on North Sea oil extraction was used as a short-term funding source to balance the economy and pay the costs of reform.”
Taxes on oil extraction have traditionally been very high. This is a big source of funding for governments. I think EROI studies miss this point. Not only do governments get the cheap oil to pave their roads and fuel their vehicles, but they also get a lot of taxes from the oil companies. Switching to renewables, and not noticing that the tax dollars are going the other direction, is a major problem.

But the debate is far from over:

“But the analysts and salespeople championing nuclear power as a carbon fighter and natural-gas conserver generally forget to add a few critical caveats. For starters, nuclear power remains (the most expensive and captital-intensive fuel on the planet. Once bill as too cheap to meter, nuclear power remains too expensive to build. Since 2003, the cost of constructing a nuclear plant has increased by a rate of 15 percent a year. A 2009 study by the Vermont Law School found that recent cost projections are four times as high as those made a decade ago. Moreover, numerous studies have conluded that renewable energy and efficiency improvements cost but six cents per kilowatt hour, while electicity from nuclear power costs between twelve and twenty cents.
The business community has never been fond of such highly centralized technology because it tends to behave like a Soviet commissar with little financial accountability. (Margaret Thatcher tried to privatize England’s nuclear power plants, but no entrepeneurs were dumb enough to volunteer for the money-losing opportunity.) Plagued by cost overruns and technological failures, public utilities served by nulear power carry some of the world’s highest debt loads. In fact, no nuclear power plant has been built in Canada on budget or without taxpayers’ money. Electricite de France, which receives 85 percent of its power from nuclear reactors, is among the most debt ridden companies in the world. So was Ontario Hydro, whose nuclear powered debts led to its dismantling into separate corporations in 1999.” Tar Sands: Dirty Oil and the Future of a Continent by Andrew Nikiforuk (2010) p. 150-1 ISBN:978-1-55365-555-8