Peat - between the moor and the garden - and the climate

Besides the odd blip in portraying the wilds of the West Country
Martin Hesp: Let's not have a pint in Yorkshire's Jamaica Inn | Western Morning News

... there is something very special about moorland, as a new book just out reminds us:

William Atkins's heady mix of topography, literary criticism and nature writing takes in Emily Brontë and Ian Brady, but is all the better for its resistance to the obvious 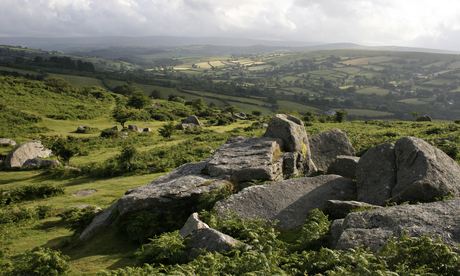 Dartmoor, seen from Bonehill Rocks in Devon. Photograph: David Lomax/Robert Harding/Rex Feature
Rough, wild, cruel and semi-savage: the early reviewers who used these words of Wuthering Heights were also thinking of the landscape in which the novel is set. In popular mythology, moors are a bogland, a badland, an undiscovered bourn from which travellers risk failing to return. The final image of Emily Brontë's novel is of three headstones.
Brontë didn't see the moors as dread and drear, though, nor its bogs as a slough of despond. Even the headstones are touched by beauty: moths flutter around them and a soft wind breathes through the heather and harebells. For every detractor of the moors, there is an enthusiast; for every scare story – "As you value your life or your reason, keep away from the moor," Sir Charles Baskerville is told in Conan Doyle's novel – a paean to their dark allure. Ted Hughes wrote of "the empty horror of the moor" but his poems celebrate its denizens' stubborn survival.
William Atkins's interest in moorland began at the age of 14, with a GCSE geography project. Outside Bishop's Waltham, the Hampshire town where his family had settled, lay a pale, rough, uncultivated stretch of ground, no bigger than a couple of football pitches. Locals called it the moors. In reality, it wasn't a moor but fenland: fens are low-lying and saturated from below, whereas moors are high and rained-on. Still, Atkins was hooked, and 20 years later he embarked on a journey, or series of walks, that took him from the southwest (Bodmin Moor, Dartmoor and Exmoor) via the Pennines (Saddleworth and Haworth) to Northumberland and the Scottish border.
His book is an ambitious mix of history, topography, literary criticism and nature writing, in the tradition of WG Sebald, Robert MacFarlane andOlivia Laing. Though not driven by a psychological or emotional crisis, it does have an element of personal quest. "I wasn't looking for an answer to some question of the heart," he says, "it was just that the 'moor' I'd known and studied as a boy had promised something that the meadow, the pasture and the woods had not – if not 'heroic adventures', then a kind of answer to the portion of myself that remained uncultivated. Victorian travellers knew the Sahara's deepest interior as désert absolu… I'd take myself off and find my own désert absolu, the wild blasted moor."

Around the country, there have been several campaigns to protect our remaining moorlands:

Scottish peat bogs are set to receive a boost with the launch of a Butterfly Conservation Scotland ‘bog squad’ dedicated to saving these precious wildlife habitats.

Scottish peat bogs are key wildlife habitats providing homes for the bog specialists such as the, Large Heath and other rare butterflies such as the Small Pearl-bordered Fritillary, Green Hairstreak. Bog edges also provide vital homes for rare moths such as the Argent & Sable, Lunar Hornet and Wood Tiger.

Many Scottish bogs are in a poor state after being planted with alien conifers, damaged by drainage, used as dumps and stripped for garden use.

But they are increasingly valued for their biodiversity, and the 'ecosystem services' they provide, such as flood prevention and carbon storage.

Butterfly Conservation Bog Squad project Officer, Sara Green said: “Peatlands are not only beautiful and fascinating, they have their own unique wildlife. They also help us to reduce flooding and combat climate change by locking up carbon. We will be recruiting and training volunteers to help conserve these wonderful places.”

Even South-West Water are getting in on the act:

Increasingly we aim to work in partnership with our customers and communities... In other areas collaboration can lead to better, more sustainable solutions, rather than just being reliant on expensive engineering fixes to solve specific problems.

For example, on Exmoor and Dartmoor we’re working with our partners on total water catchment solutions. By restoring peat bogs on Exmoor a third less water now leaves the moorland during heavy rainfall compared with three years ago.

There have been several campaigns in the media to encourage us to use alternatives to peat in the garden:
Do we need to use peat? - Telegraph
BBC - Gardening - Gardening Guides: Today in your garden - Ethical gardening
I Don’t Dig Peat – Join the Fight for Peat-Free Gardening – Garden Organic

But the pressures on peat moors are massive:


Various planning permissions had been granted for the workings, but peat extraction was due to cease this year. The appellants explained that core sampling indicated an average peat depth of three metres, providing more than 25 years' worth of additional extraction.
The reporter noted that peat is a source of carbon storage and emerging local policy sought to limit further extraction to avoid the release of carbon dioxide into the atmosphere. Although the site had been degraded by extraction, he judged it capable of being restored as active peat-forming bog that would assist in mitigating the impact of climate change.
Editor's pick: Peat extraction extension rejected for restoration | Planning Resource

That is: our peat bogs and moors are a massive store of carbon - and digging them up just exacerbates climate change:

Peat Soils vs. the Forests Above: Which Holds More Carbon?

At first glance, tropical peat soils might not seem all that exciting. Dead branches and leaves that have not fully decomposed because of waterlogged conditions? Once upon a time, even I might have found this, well, boring.
Peat soils can be difficult to relate to. Unlike the tropical forests they support, we cannot walk in their midst and stare at the surrounding majesty. Instead, the closest we can get is to walk upon them, with the swampy ground pulling at our boots. “Save the Mud!” doesn’t have quite the same ring as, “Save the Forests!” But once you know the facts, things can get pretty exciting because tropical peat stores crazy amounts of carbon.

This peat swamp forest in Sumatra, Indonesia may not seem exciting, but underneath these walkways is where the real action happens. Photo: CIFOR

The amount of carbon held in tropical peat is estimated around 88.6 billion tonnes worldwide—if all this carbon were released into the atmosphere as carbon dioxide, it would be the same as burning all proven oil reserves from Saudi Arabia, Venezuela, Canada, Russia, and the United States. That’s a scary amount of heat-trapping emissions.
Yet these huge numbers are difficult to comprehend. I only truly began to understand the necessity of protecting these ecosystems when I compared it to the carbon stored in the forests above the peat. On average, even peat that is only 1 meter (~3.3 feet) deep stores more carbon than its aboveground vegetation. This is especially problematic because there are some actors, such as the Indonesian government, that differentiate between peat of less than 3 meters (~9.8 feet) and peat which is more than 3 meters. Aside from protected areas, Indonesia only safeguards the latter. But as can be clearly seen from the figure below, even peat of just three meters can contain around ten times as much carbon as the forest above it. Aboveground peat swamp forest biomass is estimated to sequester 100-150 tonnes of carbon per hectare. And while carbon concentrations of peat vary based on vegetation, depth, water table, and location, a conservative estimate is about 500 tonnes of carbon for every meter depth per hectare. This means that even one meter of peat contains more than three times the amount of carbon as the forest above.
Oh, and one other terribly important point. Most lowland peatlands in Southeast Asia are dome-shaped. This means that while some peat in the dome (near the edges) may be on the shallow side, other peat (closer to the center) may be much deeper. Yet draining or destroying the shallower peat around the edges of the dome would likely have cascading effects elsewhere, putting deeper peat at risk as well.

To me, understanding the significance of peat means one important thing: we must do everything we can to protect remaining tropical peat soils, regardless of their depth.  Whether this means pushing Indonesia to expand peat protections, asking businesses commit to using palm oil that is free of any form of peatland destruction, or changing certification standards, there is too much carbon at risk to do anything less.

Peat Soils vs. the Forests Above: Which Holds More Carbon? - The Equation
.
.
.
Posted by Jeremy Woodward at 09:06