Town/Village Green application: "a mechanism that local objectors are using to try to hold up the council's plans for Knowle"

Looking to the District Council's cabinet meeting next Wednesday, there will be several issues to contend with, especially on Knowle:
Futures Forum: Knowle relocation project: the current issues... District Council cabinet to consider its "Relocation Update": Weds 4th June

One particular issue is that of the ongoing application for a Town or Village Green on the grounds of Knowle:
Futures Forum: Inquiry to look at issue of Town/Village Green for Knowle: Thurs 10th April

As highlighted in today's Herald: 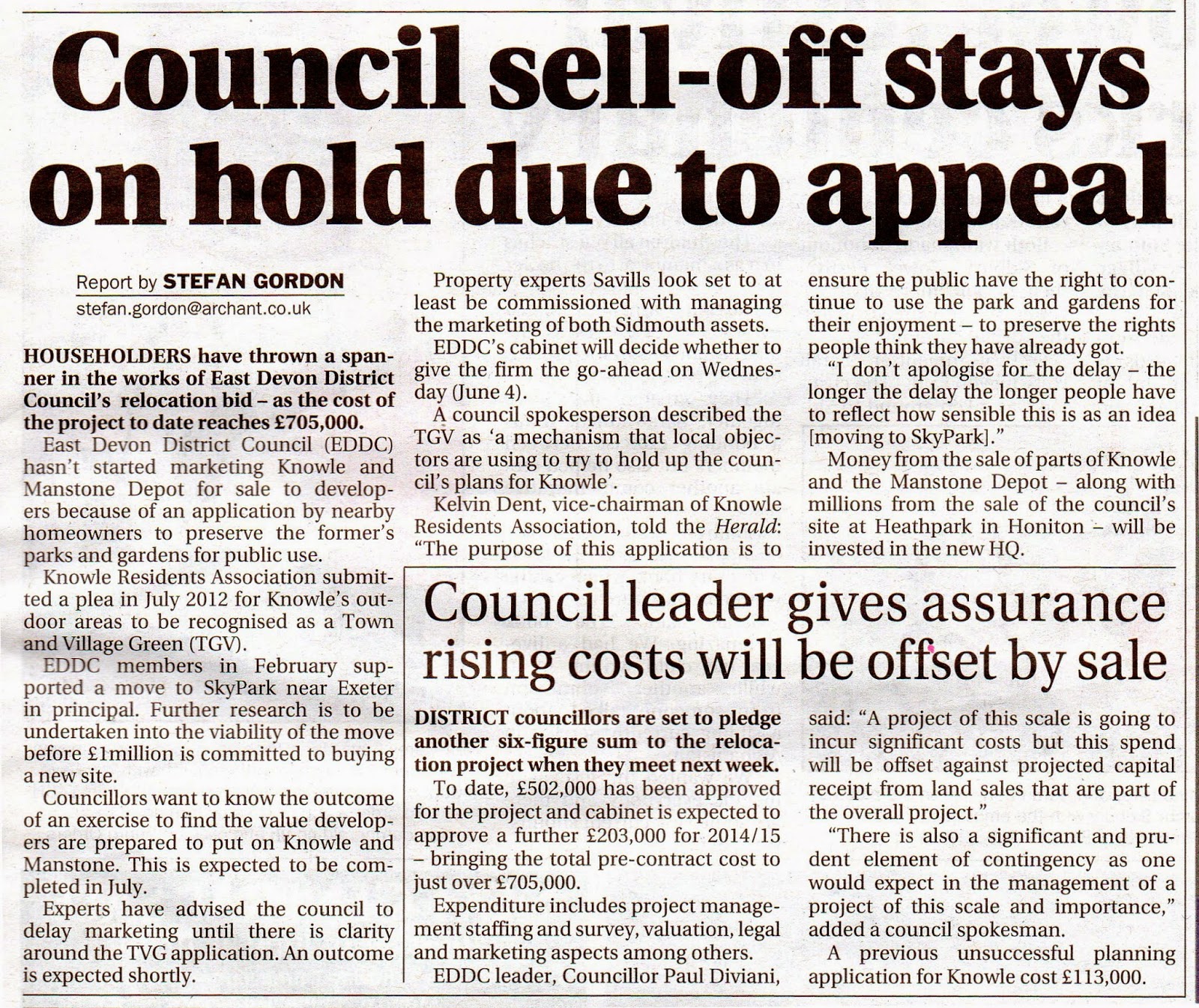 An application was submitted to Devon County Council in July 2012 to register the land at the Knowle as a Town or Village Green.

At that time the owners of the land, East Devon District Council, were proposing to grant themselves planning permission for housing  and to sell off a large portion of the park and gardens to developers. In the event, the Council refused their own planning application on 1st March 2013. The Town or Village Green application has not yet been determined although an Inspector appointed by the County Council held a preliminary public hearing in April this year and his report is now awaited.

The application to register land at the Knowle was made by the Knowle Residents’ Association in order to try to protect the public’s enjoyment of the magnificent park and gardens. Sidmouth Urban District Council were clearly concerned about the future of the land because they formally declared much of it as public open space before handing it over to East Devon District Council on local government reorganisation in 1974. Local residents are saddened that EDDC objected to the application and that they have fought the local residents all the way.

The application to register the land was supported by 40 witnesses, mainly local residents, who have enjoyed the use of the land for a variety of recreational pursuits for periods of up to more than sixty years. Many people believe that the land is actually owned by Sidmouth. Whilst this is not technically correct, it is true that the park and gardens are an asset which are enjoyed by both locals and tourists and the application to register the land was made to protect this asset for the future.

Updates on Knowle: Town & Village Green application, and footpaths. | Save Our Sidmouth

Campaigning residents apply brakes to EDDC office relocation project
Tuesday, 27 May 2014 1 Comment by Claire
Sidmouth campaigners who are opposing EDDC’s office relocation and development on the grounds of the Knowle, appear to have put the brakes on the project.
A report to EDDC’s cabinet for Wednesday 4 June confirms that a delay has been caused by residents’ town and village green application, which aims to stop or limit redevelopment of parts of the Knowle.
And an application by residents to create a formal public right of way through the picturesque Knowle grounds, which have been used by the public for decades, has also slowed down the relocation project, which has seen costs spiral and residents become increasingly angry.
EDDC’s agents, hired to sell the Knowle to developers, have advised the council to defer any marketing of the Knowle and Manstone Depot, until there is clarity on the public right of way order, which a planning inspector is unlikely to hear until the autumn.  EDDC has formally objected to the creation of formal public right of way.
The recommendations to cabinet include noting that the “extended timeframe of future decision-making,” on the relocation programme and that final decisions will be made “later in the year.”
A final decision on the project had been due to be made at July’s full council meeting.
In February, EDDC’s conservative majority controversially nodded through proposals to start negotiations to buy land at Skypark for almost £1m, in order to proceed with building new offices.
My motion to allow an independent assessment of the Knowle buildings, which had the backing of EDDC’s overview and scrutiny committee, was voted down by the conservative group.
Incidentally, EDDC has objected to an appeal to the Information Commissioner by resident, Jeremy Woodward, to publish its building assessment survey.  EDDC has no far refused to release this document under the Freedom of Information Act, which is fuelling scepticism about the state of the buildings – and validity of the case for relocation.
Next week’s report to cabinet states that negotiations are ongoing on Skypark’s developer, St Modwen, “on a variety of matters, including site acquisition and timeline.”
Plans for a supermarket on the site of the existing East Devon Business Centre at Honiton, which are required to fund the rapidly spiraling costs of a brand new office rebuild, appear to be continuing apace, with contracts close to being agreed.
A planning application is expected later this year and if approved by EDDC, it would mean that Honiton would get its fifth supermarket.
Last year, EDDC’s planning committee rejected a planning application to redevelop the cherished Knowle garden for housing.
Click here to read what happened at the full council meeting in February - http://www.claire-wright.org/index.php/post/council_nods_through_decision_to_spend_1m_on_skypark_land
The full report is available here - http://www.eastdevon.gov.uk/cabinet_040614__-_public_version.pdf
The cabinet meeting is on Wednesday 4 June, starting at 5.30pm.