Of 'urban wildlife' and 'brownfield sites'...

Talking of great pollinators:
Futures Forum: Hive Alive on BBC 2: Would we starve without bees?

... on Radio 4 earlier today, Monty Don took us to some 'brownfield sites':

Wildlife in urban areas can be surprisingly diverse - particularly when neighbouring more natural areas. Can the urban jungle actually be better than some rural areas for bees and birds? In this episode Monty Don hears from scientists working to find out just how important our urban areas are for wildlife.

Presented by Monty Don and produced by Brett Westwood.

Which does beg the question:

If we want to keep 'wild bits' in our urban area - doesn't that mean we should not be developing systematically on 'brownfield' sites?

There’s usually a reason why land has been reserved for wildlife. Sometimes it was reserved for a lord’s pursuits, more often it was either a pig to farm or a pig to build on. Modern bulldozers can work wonders, though! On housing estate near us, the developer had plans for houses (we’re talking 1960s) where a mere was. He discovered it was fed by a spring; didn’t stop him, but the houses were placed to avoid the worst of it. No sign of the wildlife-rich mere now.

Another development, now in progress, has seen a brownfield site levelled. There were some great trees there, along with historic architecture and some Japanese Knotweed. (Don’t know if the latter was properly dealt with.) What’s wrong with building around the great trees and historic bits?

Several submissions to the District Council's Local Plan consultation urged that 'brownfield sites' be built on before 'greenfield sites' - although this suggestion is more nuanced and looks to any potential ecological value any urban areas might offer:

Kevin McCloud, in association with the Housing Group GreenSquare, is in the process of building housing developments on brownfield sites across the UK that respect and, where possible, enhance the biodiversity of existing sites…. and create communities which will appeal to young and old alike; where people grow up, have a family and grow old.‘

A couple of months back there was some discussion on the blog of CPRE chief exec Shaun Speers:

How to get more brownfield development

Published May 13, 2014 Uncategorized 8 Comments
A new report from the centre-right think tank Civitas gives welcome support to the case for building on previously developed brownfield land before encroaching on the countryside. Restoring brownfield sites in our inner towns and cities by the industrialist Peter Haslehurst draws on the author’s considerable experience of how costly and difficult it is to remediate brownfield sites. The short report is full of good examples and is well worth reading.
[Response to comments:]

I don’t think there should be any major disagreement between environmental groups on the issue of brownfield land. No one is advocating building on all brownfield land. But 21 wildlife and countryside groups supported a sequential, brownfield-first approach in Wildlife and Countryside Link’s response to the NPPF consultation in 2011 –http://www.wcl.org.uk/docs/2011/Link_response_to_NPPF_consultation_171011.pdf. Those signing up ranged from CPRE, the Ramblers and the Open Spaces Society to the Wildlife Trusts, the RSPB and Buglife.

How to get more brownfield development | CPRE viewpoint

However, a piece in the Telegraph from 2007 suggested things were not so straightforward:

Brownfield sites are havens for wildlife

Fred Pearce on the need to keep some brownfield sites, so nature can flourish undisturbed

Save the brown fields. Yes, you heard my right. If environmentalists and property developers can agree on anything, it is that urban "brownfield sites" are for building on.

And Gordon Brown wants as many as possible, in order to save the green belt. But always beware a consensus. And here I think the big green groups have got it all wrong.

For in our increasingly landscaped and sanitised world, some of our most astounding wildlife habitats are on derelict urban land - the very brownfield sites that Friends of the Earth and the Campaign for the Protection of Rural England want us to concrete over. If they think they are saving nature this way, they have got it horribly wrong.

Here is one example. Less than a mile from where I live, developers have recently built apartment blocks on a small brownfield site. They call it Battersea Reach now, but it used to be Gargoyle Wharf, an oil storage depot close to Wandsworth Bridge in south London.

When it was empty, greens regarded the abandoned depot as a toxic wasteland. But plants thought differently. And for a while, it was London's top site for wild flowers. Botanists found more than 300 species of flowering plants there.

It was, one told me, "one of the most fantastic sites I've ever been to." But no big-league environmental campaigners came to the defence of the flowers, because they were on a brownfield site. So we have Battersea Reach.

Wastelands are good for wildlife. A sixth of all the official sites of special scientific interest in Britain - the basic designation for anywhere that nature thrives interestingly - are old urban, industrial and mining land.

Waste land or 'brownfield' sites are vital for wildlife

Richard Fox from Butterfly Conservation said that many of the sites were under threat from by redevelopment and "bland landscaping schemes". He explained to BBC Nature why these areas - of disturbed or even contaminated land - were such unique habitats.

"An old spoil tip [for example] would be terrible if you wanted to create a garden, but it's great for wildlife, because the poor soil leads to slow development of diverse plants."
Patches of bare ground that heat up in the sun also produce "little microclimates" on brownfield sites.

Mr Fox explained: "These are great for insects, especially in a cool, damp place like Britain." 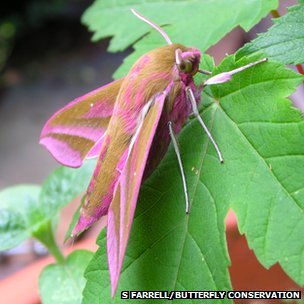 He added that he hoped "moth night" would encourage formal wildlife surveys of brownfield areas, so that their true environmental value could be calculated and taken into consideration in any decision about whether and how to develop them.

BBC Nature - Waste land or 'brownfield' sites are vital for wildlife
.
.
.
Posted by Jeremy Woodward at 14:53