On the River Otter: the media behaving badly over beavers

There has been a lot of coverage of the beavers on the River Otter:
First wild beaver to be seen in Britain for centuries gives birth to three young | Mail Online

And there has been a lot of coverage of beaver goings-on in North America - hopefully much of it ironic in tone:
Evil Beaver Attempts To Kill Family By Dropping A Tree On Their Car
Rogue beaver blamed for tree falling on Quebec family’s SUV in Prince Edward Island

With BBC Two looking at further issues in beaver-land - in a rather crass 'documentary': 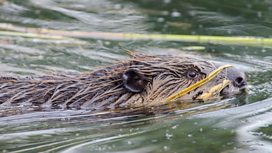 Who are you going to call when beavers are behaving badly? Well, if you live in Jackson Hole, Wyoming, Drew Reed is the go-to 'beaver buster'. Drew works as a wetland conservationist, helping to keep the peace between beavers and people. These busy rodents are incredibly industrious - felling trees and building dams are two of their favourite occupations. This can be good news in the wild, helping create rich habitats for a variety of wildlife, but in backyards it can spell disaster. A beaver is more than capable of bringing down a tree large enough to damage property and their dam building can result in flooded homes. Drew must do what he can to steer beavers away from trouble and stop their so-called bad behaviour.

The Guardian was not impressed with this coverage - as were many of those leaving comments:

Beavers are creatures whose thankless work has helped build America. So what did they do to deserve a Rob Brydon voice-over?

A camera pans across the majestic Teton mountains. Rivers snake through snow-tipped poplar trees. Scenes that look like they were painted by Bob Ross himself make you giddy at your own insignificance on this beautiful planet. A beaver peers down its nose. A comedy boinging-spring sound is deployed.

Natural World - Beavers Behaving Badly (Thurs, 8pm, BBC2), how you dazzle us with your reverence for nature.