Holding back the sea: Radio 4 looks at 'managed retreat'

On BBC Radio 4 earlier this evening, the options for 'what to do about rising sea levels' were explored - with the example of the Wash.

Should there be 'managed realignment' or should we 'hold the line'?

Should communities pay for the schemes 'voluntarily'?

Other coastal communities are watching what will happen - and be allowed to happen
- in East Anglia:

Holding Back the Sea 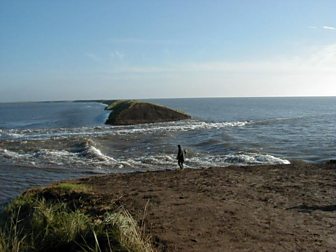 Sea pouring through gap in bank at RSPB Freiston Shore

On December 5th last year, thousands of homes and businesses along Britain's east coast were flooded by the sea when the first of that winter's great storms combined with a particularly high tide.
Close to year on, BBC News Science Editor David Shukman travels around the Lincolnshire and Norfolk coast of the Wash, talking to residents, farmers and business owners about the problems of protecting their lives and livelihoods from future inundations by the sea.
The port town of Boston was one of the worst hit communities last December. The surge poured over its defences into 700 houses. Some families are only now returning to their ruined homes. Fortunately for Boston, the government has agreed to pay some £90 million to build a barrier across the tidal river which flows through the town. Some locals say this flood defence should have been in place years ago.
Elsewhere in Lincolnshire, communities are feeling less well shielded by the nation. North of Boston, at Friskney, a breach in a frontline sea bank let in a tsunami of seawater which flooded 500 acres of prime arable farmland to a depth of 1 metre. Around the Wash, thousands of square kilometres of Fenland farmland and rural communities lie at or below sea level behind soil embankments facing the sea. These walls were built by farmers as they claimed the country's most productive arable land from the Wash's salt marsh.
After the inundation at Friskney, farmers all around the Wash are now campaigning to be allowed to raise the height and width of their frontline banks. If they are granted permission, they will receive at best only a modest percentage contribution from central government. The Treasury will only fully fund flood defence work if the return on the money it puts up is £8 for every £1 spent. The farmers argue that the economic value and food security importance of what they produce is not taken into account in the calculations.
Alternatively, conservation organisations such as the RSPB argue that rather than bolstering defences, sections of these embankments should be deliberately breached to allow Wash salt marsh to expand. As sea level rises, more embankments will become more vulnerable. A managed retreat of the defences would do two important things, they argue. It would provide more habitat for the many thousands of wintering birds which make the Wash one of most important wildlife areas in Europe. The extra expanse of salt marsh created would also make a natural flood defence, better protecting the new bank further inland. Not surprisingly the farmers of the Wash Frontage are not sold on this idea.
On the east coast of the Wash in Norfolk, the people living and running businesses in the shoreline communities south of Hunstanton are faced with their own pressing threats. Their defences were breached in several places last December and in 1953, the great tidal surge of that year drowned dozens of people in the area.
The funds to maintain their shingle sea wall run out in early 2016. They have been told by the Environment Agency that the only means to finance this work and any future upgrading after 2016 is to pay for most of it themselves. If enough caravan park owners, landowners and residents are able to amass a viable fund voluntarily, the government will then top up the money available by 25%. A group of local businesses is now in the process of setting up a body to collect and pay out the money - a body called a Community Interest Company. It will be the first of its kind established for local flood defence. Needless to say, some in the neighbourhood regard this as an inappropriate and fragile arrangement by which to protect lives and livelihoods from the sea.
Producer: Andrew Luck-Baker.
Related Links

BBC Radio 4 - Holding Back the Sea

See also:
Futures Forum: Climate change... and protecting Sidmouth against rising sea levels
Futures Forum: Local authorities and managing the natural environment
Futures Forum: Sidmouth Beach Management Plan: "a waste of money" ... "“It’s far better being spent now on putting some rocks round the bottom of Pennington Point and trying to stop some of the erosion."
Futures Forum: Somerset on Countryfile ... ... "Floods, Politics and Science: The Case of the Somerset Levels"
.
.
.
Posted by Jeremy Woodward at 14:54