The plans for a solar farm outside Sidbury was shelved earlier in the year:
Futures Forum: Solar Plan for Sidmouth: a second application stalls as subsidies are questioned...

A new application at a new site has also been rejected by the Town Council:

Members were unable to support the application for the following reasons:

 Policy EN14 – Development on High Quality Agricultural Land and Policy S5 Countryside Protection of the East Devon Local Plan; the proposed use of this site would result in the loss of viable agricultural land.

 It was suggested that another more suitable site should be found to accommodate such a development.

Note: Members further suggested that if this proposal was to be implemented, a bond be made between the Applicant and East Devon District Council to ensure that money is made available to reinstate the land at the end of this temporary use.

And the full application is here, although there is currently no access:

And here is today's piece from the Herald: 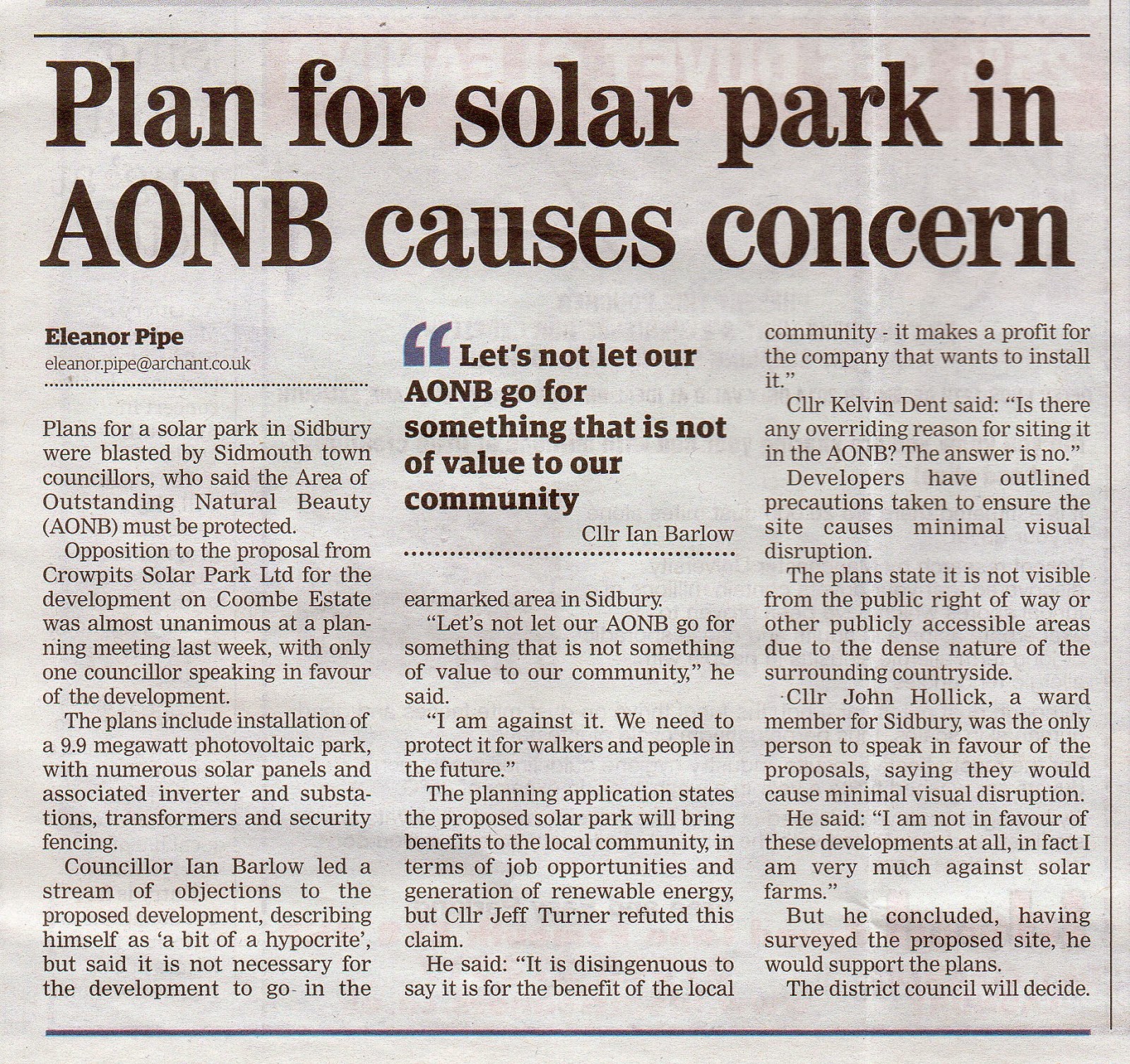 There seems to be a lot of hostility to the notion of 'solar farms' in general:

Liz Truss said solar panels were taking up land that could be used for food production
First published Sunday 19 October 2014 in National News© by Press Association 2014
Large-scale solar farms are a "blight on the countryside", Environment Secretary Liz Truss said as she announced plans to axe a taxpayer subsidy to farmers and landowners for the schemes.

Ms Truss said she was concerned that the "ugly" rows of solar panels were taking up land that could be used for food production.

The Environment Secretary said she would end grants worth £2 million a year available via her department from the European Union's Common Agriculture Policy.

Ms Truss told the Mail on Sunday: " I want Britain to lead the world in food and farming and to do that we need enough productive agricultural land. I'm very concerned that a lot of our land is being taken up with solar farms. We've already got 250 of them and we've got 10,000 football pitches worth of new solar farms in the pipeline."

She said the solar farms are "ugly, a blight on the countryside" as she signalled the end of the £100 an acre grant.

"Food and farming is our number one manufacturing industry, the whole food chain represents £100 billion in our economy, and it is a real problem if we are using productive agricultural land for solar farms," she said. "I'm not against them per se - they're fine on commercial roofs and school roofs - but it's a big problem if we are using land that can be used to grow crops, fruit and vegetables. We import two-thirds of our apples, and using more land for solar panels makes it harder to improve that."

Earlier this month the Department for Energy and Climate Change (Decc) slashed its support for large-scale solar farms, with subsidies under the existing "renewables obligation" ending next April, two years before they are curtailed for other technologies.

Decc said the move was necessary as large-scale solar developments - which have caused some controversy because of their impact on the countryside - were growing faster than expected and would exceed the budget for subsidies by £40 million in the next two years.

Solar farms 'blight on countryside' (From This is The West Country)
.
.
.
Posted by Jeremy Woodward at 06:57