Your takeaway coffee cup is not recyclable

Some would say that Sidmouth has a surfeit of cafés:
Futures Forum: Sidmouth: a town of charity shops and coffee shops?

How many of them serve take-away drinks in recylable or even biodegradable cups?


Less than 1% of takeaway coffee cups get recycled – or “dramatically less than 1%” in the striking phrase of Peter Goodwin, co-founder of the UK’s only paper-coffee-cup recycling business. It takes a specialist company, because the plastic used to laminate the cups has to be removed before the paper is pulped. A bit like the fruit juice cartons that, as any eager recycler will know, are not to be confused with cardboard and are processed alongside paper cups in Stainland, West Yorkshire, at the UK’s only carton recycling plant. 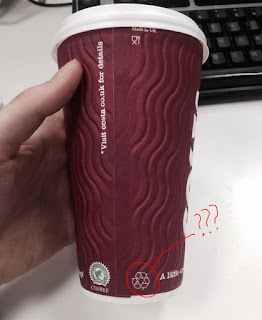 This is disingenuous because cups are not 100% recyclable

Metro.co.uk has asked Costa to clarify exactly what the symbol means on their cups but environmental charities and consumer group claim they can’t be recyclable because there is a thin coating of plastic – polyethylene – inside the cup.
While this stops your cup going soggy, it means the cup is NOT completely made from cardboard and therefore cannot be recycled by most UK paper mills.

Meanwhile, the public would clearly like something to be done about it - which the packaging industry is recognising:
Rise in consumer demand for compostable takeaway cups | Packaging News

The New Economics Foundation has some ideas on how to tackle this issue:

There’s much gnashing of teeth about takeaway coffee cups right now.New figures show that only one in 400 cups are actually recycled – that’s because recycling them turns out to be extremely difficult.  In fact, only one plant in the UK currently has the necessary kit to strip away the cardboard from the hidden layer of polyethylene.
With 7 million cups used every day in the UK, that’s a major environmental problem. It’s an economic one too: councils are charged over £80 for every tonne of waste that ends up in landfill.  Recycling Minister Rory Stewartrecently suggested that a charge, like that levied on plastic bags, could be placed on takeaway coffee cups too. But the Department for Environment, Food and Rural Affairs (Defra) responded saying there are in fact no plans for such a thing.
Doing nothing is not an option. England’s recycling rate overall hasflatlined at around 43%, dragging-back the UK’s progress towards meeting the 50% EU target by 2020. Too much faith has been placed in trusting companies to get on with fixing these problems. Coffee companiesalready stand accused of misleading environmentally-concerned consumers about their green credentials.
So what are the options?

The 5p plastic bag charge, introduced in England last year, has been hugely successful. Tesco has reported an 80% fall in plastic bag use already.  It works because there are easy alternatives: perhaps people realise they didn’t need the bag in the first place, or can get into the habit of carrying their own bag around with them. And it plays to the economic concept of ‘loss aversion’ – people resent paying the extra charge, no matter how small, for something that they had previously considered to be free.
Some coffee outlets already charge you less if you bring your own cup, but this doesn’t make much of a difference to the 2.6 billion takeaway cups churned out every year.
But the plastic bag charge shows that it would be far more effective to make companies charge extra for takeaway cups. The ultimate point is to shift social norms – although it might take longer for people to carry their own cup with them – particularly given that coffee stores charge handsomely for providing you with a coffee on a whim.

A tax may not have the same impact. It would be levied on the company, not the consumer, so it’s far less visible, and companies with the profit margins of Costa or Starbucks might simply absorb the costs of having to pay.
But positively, this could encourage innovation – creating alternative and more sustainable ways to carry coffee around, or funding better recycling facilities.  However, the outcome is far less certain. (Much of the debate about George Osborne’s new sugar tax has been whether the tax would shock fizzy pop companies into using less sugar, or simply be passed on to consumers.)

Recycling isn’t Plan A: the ideal situation would be to not use unnecessary plastic in the first place. So why not simply ban problem cups outright?
Having the capacity to recycle 0.25% of takeaway coffee cups isn’t much better than not being able to recycle them at all.  Companies could be given a few years to come up with alternatives, as with lightbulbs.
But the cold reality suggests this isn’t very likely.  The small print of the Budget is quietly delaying targets for plastic recycling by three years, to reduce the “burden” on business. This is just one example of a drive to cut red-tape for businesses that is seen, often wrongly, as troublesome. Recent legislation now means that a department considering the introduction of a new regulation, has to cut two (and soon to be three) somewhere else first.
The hasty stamping down by Defra of its minister’s comments is hugely revealing of how hard it’s going to be to give everyone a green cuppa.