Devolution and the drawbacks of 'back room' deals

Back in February, the Communities and Local Government Commons Select Committee report into devolution was 'struck by the lack of discussion and consultation with the public':

Devolution: the next five years and beyond

50. As we have discussed..., devolution in England is generally proceeding by means of deals negotiated and agreed between local areas and the Government. This is a pragmatic way forward but there are risks in deal-making which, to be mitigated, require the use of proper processes—we are all familiar with the drawbacks of ‘back room’ deals. Openness, transparency, agreement of a timeframe and equal influence between the parties will help to ensure the process and the deal agreed are both beyond reproach. The evidence we received suggested that the current process could be improved in a number of ways.

51.We have been struck by the lack of discussion and consultation with the public in areas which have proposed, negotiated and agreed devolution deals. At the question and answer session we held with residents during our visit to Greater Manchester, the vast majority of contributions, often made in angry tones, arose from the perceived lack of efforts by the combined authority to engage the public about the deal relating to their local area.

House of Commons - Devolution: the next five years and beyond - Communities and Local Government Committee

This concern over lack of transparency is being voiced all over the country - with references aplenty to the Committee's report:

The deal could see a North East elected mayor introduced as well as access to billions of pounds, but critics say residents were kept in the dark

“There was no deliberate attempt to keep people in the dark but it was just ineffective in engaging with the community as a whole.”

In February this year, a report by MPs concluded regional mayors and super-councils are being created without consulting the people they are going to govern. They said councils and Government Ministers had agreed deals to create directly-elected mayors without involving residents in the negotiations.

"Will you take urgent action to tackle GM councils' waiting list for housing with genuinely affordable homes...Or will you prioritise skyscrapers for international investors?"

To raise awareness of the role played by local council leaders in what it calls "the whole dodgy and completely undemocractic Devo Manc devolution deal", the Campaign for Democratic Devolution is bringing its Roadshow to Eccles town centre on Monday, pushing a number of pertinent questions residents can ask City Mayor candidates before they decide how to vote. 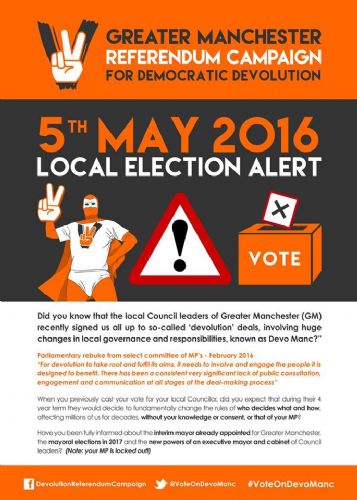 In February his year, the House of Commons Select Committee slated the complete lack of democracy surrounding Greater Manchester devolution deal, signed by leaders of all the ten GM councils, including Salford Mayor Ian Stewart.

"There has been a consistent very significant lack of public consultation, engagement and communication at all stages of the deal-making process" the Select Committee found (see previous Salford Star article – click here).

But there are alternative ways of doing local government:

Is the government’s “devolution revolution” stalling? The National Audit Office’s new report on English cities’ devolution deals, published last week, suggests it could be. The report makes clear what council leaders have been telling the government for months: many councils don’t know what powers are on offer to them, when they may get them, or how they will pay for them.

Transparency matters because you can’t devolve powers to communities if they don’t know anything about it. Involving communities will lead to better devolution deals because local people understand their own communities better than Whitehall does.

Polling by Ipsos Mori demonstrates a close link between awareness of devolution and positive attitudes towards it. Being open about devolution builds support, while doing deals in secret breeds opposition. That’s why the most successful transformations in public services are coming from local, not central, government. Plymouth council, for example, has set up more than 30 energy co-ops working with their community; Rochdale has recently mutualised its housing stock to give tenants a real stake in ownership, and Oldham council has improved care for older people and better conditions for care staff in its ethical care company.

It's all about transparency - and accountability:

Someone to blame, someone to sack: why local government is a failed state

Mayors can be the answer to local accountability, but George Osborne’s plans are inconsistent and unpopular

Despite his good intentions, Osborne’s bid to restore local accountability to English government has hit trouble. It is unresearched and unconsulted, advancing in fits and starts.

Local government makes most sense when rooted in locality, in coherent communities used to running their own affairs. The cities and county boroughs inherited from the 19th century were such bodies. They attracted good local people to serve their councils, as happens today in Germany, France and the US. Local turnouts in the first two are between 60 and 80%. In Britain it is nearer 35%, a sure sign of democratic failure. Osborne’s random scatter of mayoralties is unlikely to stir the juices of accountability.

Someone to blame, someone to sack: why local government is a failed state | Simon Jenkins | Opinion | The Guardian
Doubts cast over rural England elected mayor plans - BBC News