The DMC’s fourth and final reason for rejecting the planning application on 1st March 2013 also has parallels with the current application:

4 - Contrary to policy EN9 (Extension, Alteration or Change of Use of Buildings of Special Architectural and Historic Interest)

RESOLVED: that the application 12/1847/MOUT be refused, contrary to Officer recommendation, for the following reasons:

4. The proposed development would have a harmful impact on the setting of the listed building known as Balfour Lodge which formed one of the original gatehouses to Knowle by virtue of its close relationship and the form of development proposed. The development would therefore be contrary to policy EN9 (Extension, Alteration or Change of Use of Buildings of Special Architectural and Historic Interest) of the adopted East Devon Local Plan.

These 2013 plans did indeed ‘have a harmful impact on the setting of the listed building known as Balfour Lodge’:
http://planningapps.eastdevon.gov.uk/Planning/StreamDocPage/obj.pdf?DocNo=1010422&PDF=true&content=obj.pdf (document 1010422 on page 164)

It is, however, clear that the current plans do not constitute any such threat, as there would be no building on the lower car park, which is opposite the Lodge – as made clear  by the developer PegasusLife.
In the accompanying plans on their website they state that

‘Our site includes the EDDC buildings and parts of the grounds including the council car park. It does not include the car park near Station Road.’

SUMMERHOUSE IN THE GROUNDS OF KNOWLE: 2013

However, what the objection made by the DMC on 1st March 2013 to that planning application omitted was that the plans they rejected would have had ‘a harmful impact on the setting of the listed building known as’ … the Summerhouse.

Because what was a serious shortcoming at the time was the undervaluing of the site’s most vulnerable Grade II Listed Building:

Rather depressingly at the time of the 2013 application, the District Council did not seem to be particularly bothered with this Listed Building. It was very unclear how the planning application would affect the summerhouse:

'When you sell the Knowle, what will happen to the listed building and the grounds that are open to the public?'

'There is a Grade II listed summerhouse in Knowle grounds and this will be given appropriate consideration within the planning process. It will be up to the developer to decide if they wish to retain the structure or seek to remove or relocate it and this will be part of their planning application.’

This approach would certainty not endear the developers to English Heritage:
Setting of Heritage Assets | Historic England
https://content.historicengland.org.uk/images-books/publications/gpa3-setting-of-heritage-assets/gpa3.pdf/

With a critique of the report from the time:

The report claims that the buildings and grounds are ‘much altered’ and that ‘the setting of the listed Summerhouse is already much compromised and divorced from the original integrity of the extended grounds.’ This understanding of the setting is in much dispute, as has been made clear by the submissions from established bodies including the Devon Gardens Trust and SAVE Britain’s Heritage.

Critique of the Heritage Statement for the revised plans for the Knowle. | Save Our Sidmouth

SUMMERHOUSE IN THE GROUNDS OF KNOWLE: 2016

With regard to the latest planning application at Knowle, the developer makes it quite clear that it will not be interfering with the summerhouse:

The park, the car park near Station Road and the existing Grade II listed summerhouse will remain in public ownership.

Nevertheless, as with the Kensington Taylor report of 2012, the 2016 Heritage Statement clearly intends to diminish the value of the 'setting' of the heritage asset - thereby justifying the building on the terraces immediately above the summerhouse:

"Although there is still historic and visual linkage between the asset and the Knowle, the dgreee to which the structure is perceived as part of a Victorian garden landscape has, however, been almost entirely lost."

And yet there seems to be some hesitation as to the value of the terraces as part of the setting:

"The principal element of setting for this listed building is therefore considered to be the gardens in which is sits, whilst the wider surroundings, including the Knowle, all provide a minimal level of value to its significance." 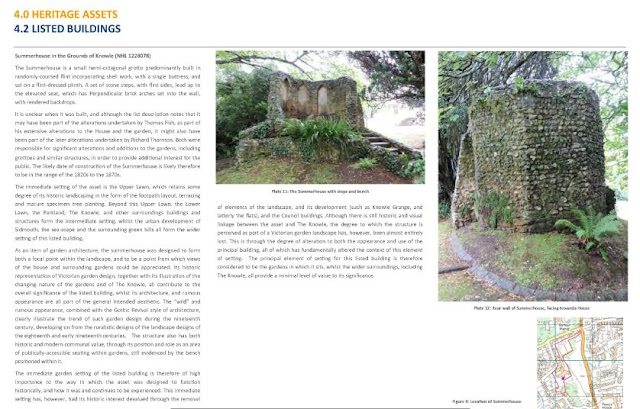 And, actually, the terracing at Knowle, which would have been a late Victorian piece of landscaping, is in integral part of the parkland - and as such provides the 'setting' for the summerhouse.

Japanese garden design might seem a million miles away from Sidmouth, but an observer sent in this comment:

"Orientalism became popular in the 1860s onward which accounts for the increased exoticism of many gardens. The verandah arrangement connecting the interior with the lawns could be described as oriental."

"In Japan the engawa links the inside and outside, and this inbetween space is known as ma. Another key Japanese garden elements is “Shakkei” which is borrowed landscape, ie view to the sea through the trees as if an extension of the park."

The summerhouse is just behind the evergreen tree in the foreground to the right...