The fishing industry is hoping for greater access:
Futures Forum: Brexit: and 'looking to get increases in fishing quotas'

But it looks as though they're going to be disappointed:
Futures Forum: Brexit: and betraying the UK's fishing industry

As this recent piece from the Guardian suggests:

UK fishermen may not win waters back after Brexit, EU memo reveals 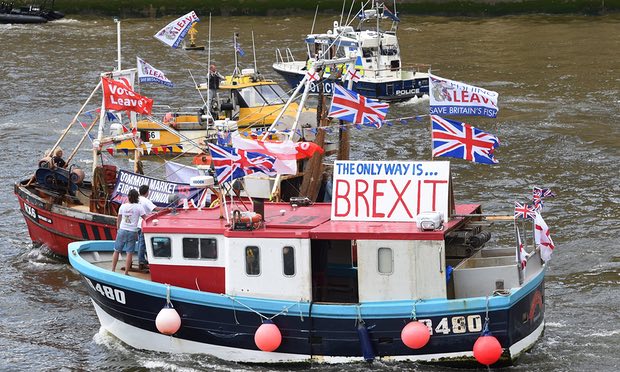 A flotilla of fishing trawlers, organised by Nigel Farage, sailing up the river Thames during the referendum campaign. Photograph: Facundo Arrizabalaga/EPA

The hopes of British fishermen that the UK can win its “waters back” after Brexit are expected to be dashed by the European parliament, despite the campaign promises of Boris Johnson and Nigel Farage, a leaked EU document reveals.
MEPs have drafted seven provisions to be included in Britain’s “exit agreement”, including the stipulation that there will be “no increase to the UK’s share of fishing opportunities for jointly fished stocks [maintaining the existing quota distribution in UK and EU waters]”.
The document, obtained by the Guardian, adds that in order for the UK and EU to keep to commitments on sustainable fishing – contained within the United Nations stocks agreement – “it is difficult to see any alternative to the continued application of the common fisheries policy”.

It is estimated that there only about 11,000 people directly employed in fishing in the UK, however the UK’s trawlermen were among the most vocal critics of the EUduring the referendum, fuelled by frustration over controls on fishing quotas, which have been blamed on Brussels and the common fisheries policy (CFP).
While calling for control over Britain’s waters, Farage, the then Ukip leader, and the Labour MP Kate Hoey led a small flotilla of fishermen up the Thames days before the EU referendum in June, where they clashed with rival boats led by the singer and political activist Bob Geldof. 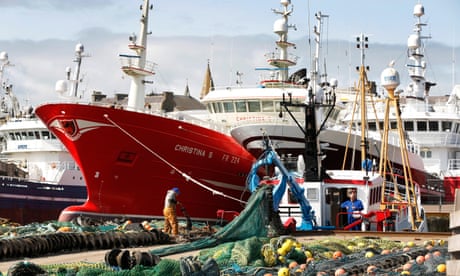 Salt in their veins and fire in their bellies: fishermen battling for Brexit

Read more
Speaking at the time, Farage said: “Today’s flotilla is not a celebration or a party but a full-throttled protest. We want our waters back.”
During the referendum campaign, Johnson, who is now the foreign secretary, described the CFP as “crazy” and claimed the EU had inflicted a “tragedy” on the industry, halving the number of people working within it.
But the leaked report from the European parliament’s committee on fisheries insists that the “granting of access to the EU domestic market to the UK” post-Brexit should be conditional on Britain continuing to respect the rights and obligations in the CFP.
In a move that will frustrate many in the UK industry, the MEPs also insist that EU vessel-owners should continue to be allowed to manage boats under the UK flag. It has been reported that the Dutch-owned trawler, the Cornelis Vrolijk, accounts for 23% of the English fishing quota.
The document says that as well as “reciprocal access for the EU and UK fleets to the fishing grounds in the UK and the EU waters” any exit deal must include measures “ensuring the maintenance of the same legal conditions for UK-registered vehicles, without requiring stronger economic links that could virtually make it impossible for EU vessel-owners managing UK flagged vessels to continue operating in the UK”.

The document concludes: “The nature of future EU-UK relations in fisheries needs to be seen in relation to the UK’s ambition in keeping close ties with its European partners and the common market … Every agreement that guarantees UK access to the EU domestic market has to guarantee an access to the UK fishing grounds for the EU fleet.”
The European parliament will make public its red lines a few weeks after Theresa May triggers article 50 negotiations. Each committee has been asked by its leaders for input. The intention is for the documents to aid the EU’s chief Brexit negotiator, Michel Barnier, and the European council in shaping their negotiating position.

The government’s white paper failed to offer any commitments to UK trawlers over the future, despite the sector having a high profile in the referendum campaign. The paper merely noted that “in 2015 EU vessels caught 683,000 tonnes (£484m revenue) in UK waters and UK vessels caught 111,000 tonnes (£114m revenue) in member states’ waters”.
It added: “Given the heavy reliance on UK waters of the EU fishing industry and the importance of EU waters to the UK, it is in both our interests to reach a mutually beneficial deal that works for the UK and the EU’s fishing communities.”
Barrie Deas, chief executive of the National Federation of Fishermen’s Organisations, said he understood why the EU would start negotiations with a “hard line” but that he believed there would be radical changes for the industry.
He said: “I understand where they are coming from. It’s quite a hard line to go into a negotiation and we are waiting to see what the UK’s position is. But the reality is that there is a huge imbalance in terms of other member states fishing in UK water.
“Around 85% of the current catch of the Danish fleet is in UK waters and 80% of the current catch of the fleet from Normandy. If we look at quota shares in Channel cod, the French have 84% and Britain has 9%.
“There will be change once we leave the European Union. I think the model is the bilateral agreement that Norway has with the EU. But things are going to change,” Deas said.
Liberal Democrat environment spokesperson Baroness Parminter said: “Yet another of the leave campaign’s promises has been shown to be nothing but hot air.
“The Common Fisheries has been far from perfect. But the reality is fish stocks do not respect borders, so the only way to prevent overfishing is to work closely with our European neighbours.
“This shows yet again why the people must be given the final say on the Brexit deal, so everyone including fishing communities can decide if it’s right for them.”
The Ukip fisheries spokesman, Mike Hookem, attacked the MEPs behind the leaked report as “desperate”.
He said: “UK waters and fish stocks must return to UK control post-Brexit.
“This is nothing more than the EU wanting to have their cake and eat it. Time and again we are told the UK will not get any ‘special deals’ post-Brexit. Well, in that case, it should work both ways, and UK waters must return to UK control regardless of what the EU want.”

UK fishermen may not win waters back after Brexit, EU memo reveals | Environment | The Guardian
.
.
.
Posted by Jeremy Woodward at 01:00