Brexit: and the Environment Secretary not upsetting farmers by not supporting the EU's ban on glyphosate (aka Roundup)

The UK will follow the EU in banning one insecticide:
Futures Forum: Brexit: and the Environment Secretary upsetting farmers by supporting the EU's ban on 'bee-killing' neonicotinoids

But not when it comes to another insecticide...

And so we have had another non-decision in Brussels:
EU split over use of major weedkiller glyphosate - BBC News
EU ministers fail to agree on Glyphosate license renewal, again
Glyphosate decision to go to appeal after five-year licence proposal fails - News - FG Insight


With a deadline just weeks away, the European Union failed Thursday to break a hardening stalemate on whether to renew the licence for the widely-used weedkiller glyphosate, which critics fear causes cancer.

The European Commission said it fell short of the majority needed to renew the license for five years when it expires December 15, as only half of the 28 member states voted for its proposal. "Given that a qualified majority could not be reached ... the result of the vote is 'no opinion,'" said the commission, the EU's executive and regulatory arm.
The latest result was hailed by environmental campaigners, including those who rallied outside EU headquarters to mock US agro-food giant Monsanto, the maker of the best-selling glyphosate product Roundup. "Today we have seen that the seventh attempt of the European Commission to renew Glyphosate has failed again," said Luis Morago, Avaaz campaign director. "Monsanto wanted 15 more years and they can't even get five."
The European Commission, which had originally recommended approving the herbicide's use for another decade, said it will now submit its proposal to an appeals committee by the end of November.
'Overwhelming pressure'
The weedkiller deadlock in the EU has dragged on since June 2016, when its previous 15-year licence expired, and an 18-month extension was granted. Thursday's vote failed to pass when experts from nine countries, including France, Belgium and Italy opposed renewal and experts from another five countries abstained. 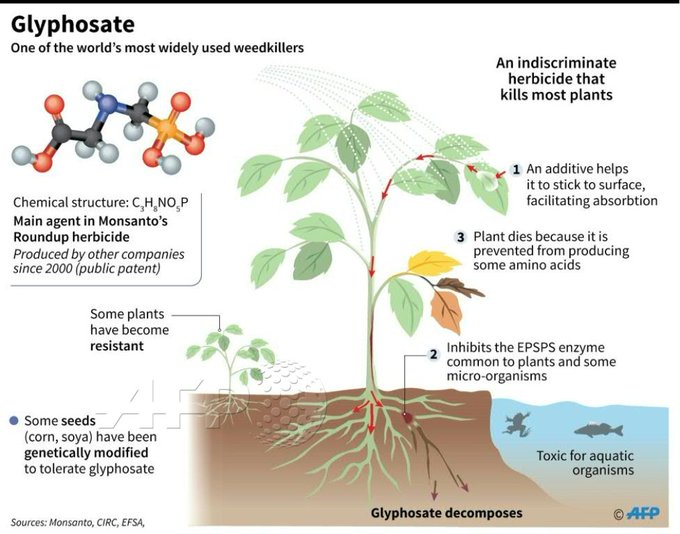 Twitter Ads info and privacy
Fourteen states voted for the proposal, including Denmark, Britain and the Netherlands, the commission said. France's environment minister Nicolas Hulot, a celebrity green activist, said he was "proud" that France "stood firm" against a five-year renewal as it seeks to phase out the herbicide and scrap it in three years.
The European Parliament, the EU's only elected body, last month said glyphosate should be renewed only until 2022 and banned thereafter. However, faced with growing uproar over the alleged dangers of glyphosate use, EU states balked last month at a renewal and the commission then proposed reducing the timeframe from ten years to five years.
Environmental campaigners Greenpeace and other critics are calling for an outright ban in Europe for glyphosate. Last month they handed the EU a petition signed by more than 1.3 million people backing such a move. "Overwhelming public pressure is paying off, with a clear lack of political support to extend the licence for glyphosate," said Adrian Bebb of Friends of the Earth Europe.
Despite the result, Greenpeace expressed concern that the commission will adopt its own proposal without the backing of European governments, which it has the power to do. "The EU needs to ban it now, not in three, five or ten more years," Greenpeace EU food policy director Franziska Achterberg said.
'Politics wins, science loses'
Activists point to a 2015 study by the World Health Organization's (WHO) International Agency for Research on Cancer that concluded it was "probably carcinogenic".
But the European Food Safety Authority and the European Chemicals Agency both say glyphosate is unlikely to cause cancer in humans, in line with a 2016 review carried out by WHO experts and the UN Food and Agriculture Organization. Monsanto insists glyphosate meets the standards required to renew its European licence.
The European Crop Protection Association's spokesman Graeme Taylor said the pesticide industry found it "disappointing there is still no clear decision. Where politics wins, science loses," he added.
However, the science itself is under debate. Members of the European Parliament last month called for the establishment of a panel to probe claims that Monsanto unduly influenced research into its weedkiller's safety.
Europe's main farmers union, the Copa-Cogeca, said before the vote there is no alternative but to renew the licence if the continent wants to maintain yields.
(AFP)
EU fails to agree licence renewal for controversial glyphosate weedkiller - France 24
And so this is where the Environment Secretary now finds himself:

159
There was good news this morning for the hundreds of thousands of people who have been calling on the government to endorse a ban on neonicotinoids, the main culprit for the precipitous decline in the world’s bee population. Michael Gove, the responsible government minister, has finally confirmed that the UK will support an extended ban against the use of these pesticides. It’s been a long time coming – and has taken years of effort from campaigners all over the UK. Make no mistake: this ban will do much to limit the damage done by these dangerous chemicals.

The evidence points in one direction – we must ban neonicotinoids


Read more
But Gove’s new position isn’t a radical one. In fact, he’s just catching up with the 77% of the public who, in a recent poll, agreed that pesticides that harm bees and other pollinators should be completely banned. Although he claims that it is only now that the scientific evidence stacks up, there are many who would disagree. SumOfUsmembers have campaigned for a ban for years on the strength of scientific evidence, as have many others. Gove’s application of the precautionary principle is disappointingly late to the party.
In fact, the minister seems to be a part-time user of the precautionary principle at best. This morning, the UK voted to reauthorise glyphosate’s license at an EU committee (although the committee itself didn’t reach a final conclusion). Josie Cohen of the Pesticide Action Network explains, “There’s enough evidence showing that glyphosate causes cancer and damages the environment to get rid of it from our food and farms. It’s especially urgent because it’s found everywhere – one study found glyphosate and pesticides like it cropping up in 60% of breadsold in the UK.”
In short, it might be a good day for bees, but the prospects are not looking so bright for those of us hoping that the pesticides used to treat our most basic foodstuffs won’t ultimately be responsible for giving us a life-threatening illness.
There is no question that this decision on neonicotinoids is the right one, albeit delayed. And it may not be without political cost, as the big farmers that typically support the Conservatives find themselves confronting a shift in their farming practices. But for his renewed enthusiasm for environmental protection to look like more than political expediency, there is considerably more that he must do.


First, Gove must demonstrate that the UK will uphold high environmental protection standards whatever happens with Brexit. At the moment, it is hard to shake the image of the UK being dragged kicking and screaming along with the bolder environmentalists in the EU when it comes to prioritising our long-term environmental wellbeing over short-term profits and good relationships with the corporate giants producing the pesticides.
Gove could easily and robustly push back against this, if he wished to do so, by introducing the precautionary principle into UK law, via the European Union withdrawal bill, which returns to the House of Commons for debate next week. The necessary adjustments to make this possible have been proposed: now all that needs to happen is for the government to pass the legislation in its amended form. To do so would be a huge victory for the health of our environment and wildlife for generations to come. 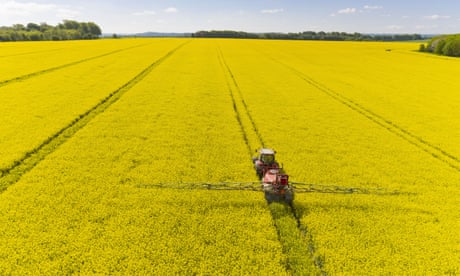 Read more
The scandal of neonicotinoids’ continued use might be the tip of the iceberg when it comes to the adverse side effects of our over-dependence on dangerous pesticides in agriculture. If the minister wants to safeguard the health of his voters and their children, he must do more than sluggishly ban the very worst offender. Instead, he must take a bold stance when confronted with similar evidence about other dangerous pesticides – and ensure the passage of legislation that will ensure his successors are required to do likewise.
• Hannah Lownsbrough is executive director of SumOfUs


Michael Gove is backing a ban on bee-killing pesticides. But it’s only a start | Hannah Lownsbrough | Opinion | The Guardian
.
.
.
Posted by Jeremy Woodward at 01:00