Here's a report out today from the Herald: 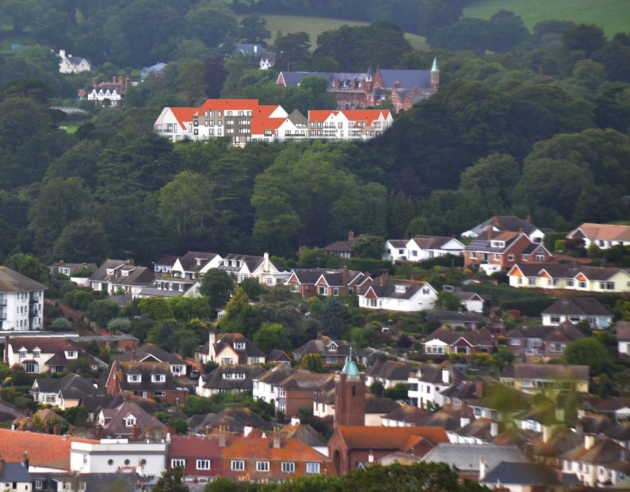 East Devon District Council (EDDC) defied officer advice in December 2016 to refuse planning permission to PegasusLife, in a deal worth £7.505million to the authority. The developer took its appeal to the Planning Inspectorate and an official will hear from both sides next week.
PegasusLife will claim that the development will not have a direct impact on Knowle’s listed summerhouse and that the scheme’s benefits outweigh any potential harm to the structure. There was also a dispute with EDDC about whether the scheme should be classed as C2, care accommodation, or C3, housing, and PegasusLife will maintain that it should be the former. If the planning inspector agrees, the developer will not need to provide any ‘affordable’ housing or community funding for the town.
PegasusLife will argue that there is a ‘compelling need’ for extra care accommodation in East Devon. It says the development will be tailored to meet the needs of occupants as they age, with integrated on-site communal facilities.
EDDC, which is currently based at Knowle but is relocating to Exmouth and a purpose-built HQ in Honiton, will argue the development will have a harmful impact on the listed summerhouse. It will also raise concerns about the impact on neighbouring properties, together with the issue of whether the development is C2 or C3 use.
An external officer has been used to ease work pressures on EDDC’s busy planning team. Because the EDDC officers originally involved in the application recommended approval of the scheme, they cannot now give evidence under oath at the inquiry, representing the council’s view that it should be refused.
Documents including objections and a statement of common ground – which gives details of the main areas where the two parties are in agreement and where there are still disagreements – can be seen on EDDC’s planning portal website (reference number 16/0872).
The appeal will be held at Knowle from 10am. A decision is expected within four working days of the close of the inquiry.
Knowle planning inquiry to open next week in Sidmouth - Latest Sidmouth and Ottery News - Sidmouth Herald

Here's an overview of the issues from the Western Morning News from earlier in the month:


Documents outlining why East Devon District Council will defend its decision to refuse plans for a 113-home retirement community at the Knowle at a planning appeal have been published.

East Devon District Council decided in 2015 to relocate its headquarters to new offices in Honiton and Exmouth. And to finance the move, the council agreed to sell its Knowle headquarters to Pegasus Life Ltd for £7.5m.

But, those plans were thrown into jeopardy when a planning application by Pegasus Life for a 113-apartment assisted-living community for older people was refused by the council’s planning committee.

Pegasus Life has lodged an appeal and a planning inquiry, set to last for five days, will begin on November 28. But it could take several months before a ruling is made.

East Devon District Council, and applicants Pegasus Life, have now published its proof of evidence ready for the forthcoming public inquiry. The published documents expand on the reasons for refusal and detail the council’s and the applicants’ full case, which will be presented at the inquiry.

A CGI showing Pegasus Life's planned development of retirement apartments at the Knowle in Sidmouth, which was refused planning permission by East Devon District Council in December

An East Devon District Council spokesman said: “The council has submitted two proofs of evidence, the first of which has been produced by East Devon’s Conservation Officer and details the harmful impact the development would have on the setting of the listed summerhouse within the grounds of Knowle.

The council was due to also defend its decision on the grounds of loss of light to neighbours, but an emergency planning committee meeting last month accepted evidence from Pegasus Life that it was no longer a sound planning reason to do so.

A council spokesman added: “Pegasus Life has also submitted proofs of evidence, together with a statement of common ground that has been agreed with the council, which gives details of the main areas where the two parties are in agreement and where there are still disagreements. This document helps the inspector to understand the main issues that the inquiry needs to focus on.”

The document adds that it is agreed that there is a need for extra care accommodation in East Devon, but there is a dispute as to if this is a care home use or residential use.

• Provision of extra care housing to meet the need for extra care accommodation within East Devon.

• Creation of a number of on-site jobs to staff the development, in addition to the creation of off-site jobs in the care sector.

• Retention and enhancement of Building B, which was part of the ensemble of earlier buildings on the site, ensuring its viable reuse within the development.

• Provision of a publicly-accessible Orangery, creating a sheltered space from which to enjoy views of the summerhouse, the Knowle public parkland and sea.

• Retention and improvement of public access across the site through the creation of permissive paths, regraded to accommodate disabled access.

• Provision of a heritage interpretation board to enable a better appreciation of the listed summerhouse.

Matters not agreed include that the proposed development comprises residential accommodation and care for people in need of care and therefore constitutes a C2 use under the Use Classes Order 1987, an agreement has not yet been reached on how the s106 agreement should deal with the review mechanism in the event the Inspector concludes this is a C3 use.

The following public benefits are not agreed with the Council:

• Provision of a high quality, contemporary, landscaped and managed development which makes effective use of a brownfield site and positively contributes to the local townscape

• Relocation and retention of a Gingko tree which is valued by the local community.

• The closure of the existing access to the site from Knowle Drive, save for emergency and service vehicle access

The documents are all now available on the Council’s web-site at:

The planning appeal inquiry takes place from November 28 and is due to last five days.

More information revealed ahead of planning inquiry over future of The Knowle - Devon Live
.
.
.
Posted by Jeremy Woodward at 14:19