Knowle relocation project: spending £10m on an new HQ while other councils must downsize

The District Council wants to sell its HQ:
Moving and Improving: all you need to know about the office relocation - East Devon

The 'buyer' will only 'buy' if it gets planning permission:

3. What will happen to Knowle?

The buyer of Knowle is a company called Pegasus Life Ltd. This company are specialists in providing living and care facilities for an older population. The demographic of East Devon shows clear compatibility with usage of this kind with Sidmouth having a population of 45.3% over 65 and 11% over 85 (2011 census).

The sale of Knowle to Pegasus Life Ltd is subject to a successful planning application. The current application from Pegasus Life was considered by the development management committee on 6 December 2016. The decision was to refuse permission and we await Pegasus Life's next steps.

The council has agreed that 86% (3.5 hectares) of the parkland at Knowle will be offered to Sidmouth Town Council to own and manage in perpetuity with a covenant over future development of this land.

Moving and Improving: all you need to know about the office relocation - What will happen to Knowle? - East Devon

And that planning permission was rejected - and has now gone to appeal, to be heard in two weeks:
Futures Forum: Knowle relocation project: District Council publishes 'proof of evidence' prepared by Cornwall Council planning officer

There are questions as to what council services will be available and where:

4. When the Council relocates, how will I access services?

Most of the council’s customers access our services by telephone or online. 84% of our customers have regular access to the internet for personal use. For this reason, we are continuing to work hard to develop more and more services which are available online.

Our new ways of working mean that more of our officers work on a mobile basis meaning that they can meet customers across the district.

The council will continue to use surgeries to provide key services across the district and this is likely to include Sidmouth on a regular basis depending on demand.

Following customer feedback, we have considered service delivery from Honiton and Exmouth.

Moving and Improving: all you need to know about the office relocation - When the Council relocates, how will I access services? - East Devon

'Service delivery from Honiton and Exmouth' means spending £10m on a new HQ:
Futures Forum: Knowle relocation project: or, putting the cart before the horse >>> Building starts on a new HQ in Honiton, but with nothing to cover the £10m+ cost

As the EDW blog reminds us, we don't actually have that sort of money - and besides, other councils are not only having to do without a spanking new building, but...

Here’s an article about cash-strapped councils selling off town halls in order to save money. There is NO comparison with councils such as ours which are then SPENDING EXTRA MONEY on their new HQ.

With the full piece from today's Guardian:

Cities is supported by

137
Karl Whitney
On the east side of Newcastle’s Civic Centre, an elderly man wanders up to the door of Rates Hall – traditionally the first port of call for accessing council services. He finds the door locked, and a notice informs him that customer services have relocated to the City Library, a 10-minute walk away.
“They do what they like, man,” he says. “It’s up to us to do the running around.”
Newcastle isn’t the only place keeping its residents on their toes. Across the country, councils are planning to sell, vacate or even demolish their headquarters.
As usual, it comes down to money. With everyone under pressure to cut budgets, Newcastle is aiming to slash its own by more than £300m by 2020. To boost its income, it’s converting offices so they’re suitable for rental, mostly to other public bodies: the entrance to the Rates Hall will provide access to a section of the building that will be occupied by the courts service. This entails a shuffling of other services to free up space, whether within the building or to external sites.
The rental yield from the Civic Centre will amount to approximately £32m over 25 years, which is “something that’s got to help us deliver services”, says Ged Bell, cabinet member for inclusive growth. (That sounds like a lot until you realise that the council cut its budget by £30m in 2016/17 alone.)

Bell sees these changes to the Grade II*-listed Civic Centre as not merely driven by economic necessity, but also essential to the building’s continued use. “I think it’s only right that we’re guardians of the building, that we actually take care of it and make sure that it’s preserved for future generations,” he says. James Perry, a Newcastle-based architect who runs Something Concrete + Modern, a blog dedicated to the 20th-century architecture of the north-east, puts it differently. He views the changes of use at the Civic Centre as a “physical manifestation of the cuts”.


Councils are faced with a stark and seemingly unavoidable choice: downsize or die

But these adjustments are minuscule compared with what’s going on elsewhere. While Newcastle’s options were limited by the Civic Centre’s listed status, “some local authorities have turned around and what they’re doing is moving from a town hall or civic hub into a newer building elsewhere”, says Bell. “Some are planning on demolition of the current town halls.” And you don’t have to go far to find them.
On a damp and dark morning, I take the train from Newcastle to Durham, and walk through soggy parklands and woods to reach County Hall, the home of Durham county council. Approached this way, the council HQ, positioned on a small hill, slowly rises above the tree line. I pass a pond and beneath a building held in the air by V-shaped columns, climbing a staircase to arrive at the rear of the complex. Carvings of symbols representing the city are set in a wall overlooking the car park: a shipbuilding scene, a steam locomotive, a cross, a crown, the crest of the Durham Light Infantry.

The council, forced to accommodate cuts comparable to Newcastle’s, is proposing to leave County Hall, and considering knocking down the building and clearing the site for redevelopment. Replacing it with private-sector office space could attract up to 6,000 jobs, according to a July 2016 report. Calling it “the best opportunity in a generation”, the report says the move “represents the best prospect of meeting our aspiration to make Durham ‘altogether wealthier’”. (“Altogether wealthier” is one of the council’s “priority themes”.) The council proposes to shift its operations to a new city centre headquarters, and to adapt four other existing council-owned sites within the county.
There are many precedents for a local authority selling off its home in this way. In 2015, Plymouth flogged its own Civic Centre to developers Urban Splash for the nominal fee of £1. It was Grade II-listed, which thwarted the council’s preferred option of demolition. It’s yet to be refurbished. Swansea’s council initially put its own sea-front Civic Centre up for sale in 2015, but continues to occupy it, and recently confirmed plans to rent the third floor to Swansea University. Northumberland county council’s proposal to demolish its headquarters at Morpeth, replacing the buildings with a retail park, school and housing development, reached an advanced stage before being shelved earlier this year. Durham has also demolished civic centres at Chester-le-Street and Consett.

Civic centres were an architectural embodiment of the growth of municipal functions in the first half of the 20th century. The reconstruction plans for British cities drawn up during and after the second world war proposed the creation of complexes that would bring together the wide range of administrative offices and services necessary for the running of a town, city or county. It took years for these proposals to be acted upon: both Newcastle and Durham’s buildings were begun in 1960, occupying large sites that included parkland open to the public.
Although it stands slightly apart from the city centre, a monumental and slightly forbidding reminder of the council’s power, up close Newcastle’s Civic Centre is a highly accessible public space. It consists of four buildings boxed around a central garden, with an L-shaped pool that you can traverse by hopping across concrete slabs that act as stepping stones. The central garden area is most easily reached through cloister-like arches lined with red brick that run beneath the buildings on the west side. 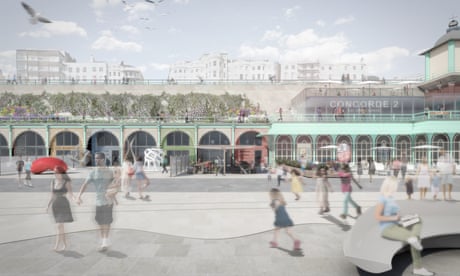 People power: how cash-strapped councils are turning to crowdfunding

Read more
A few days later, I return to Newcastle and linger near the benches in the central garden. In the south-west corner, three students sit sketching the Centre for an art project they’re doing about “things that make a mark on the city”.
I talk to Paul, who sits on a bench nearby. He works for a voluntary organisation, whose work occasionally brings him to the Civic Centre, and he likes “the quietness around here – to get a bit of a break”.
I ask him how he feels about some of the changes planned for the buildings, which include enclosing the arches in glass – a modification strongly opposed by the Twentieth Century Society. He says the building “looks a bit ugly and out of date”, so “anything that can change that image might be welcome”. At the same time, he says, “I hope that they will take into consideration that people want to chill and relax.”
Newcastle didn’t have the option of razing its headquarters, but other councils do. Civic centres were once grand expressions of 20th-century municipal expansion. Now, shrinking local authorities are faced with a stark and seemingly unavoidable choice: downsize or die.

It's part of a bigger picture:
Futures Forum: The assault on Local Government: The Strange Death of Municipal England:
.
.
.
Posted by Jeremy Woodward at 10:28