A very successful project has been the Bristol to Bath cycle way, built on the former railway track: 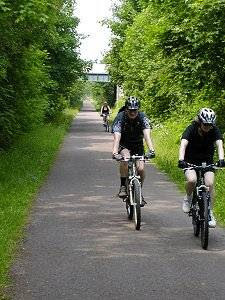 Bath resident and cyclist Paul Stephens has created a virtual journey of the Path on his own website, Paul's Pages.
The Bath - Bristol Cycle Path at www.paulspages.co.uk


Bristol's Railway Path is becoming a victim of its own success 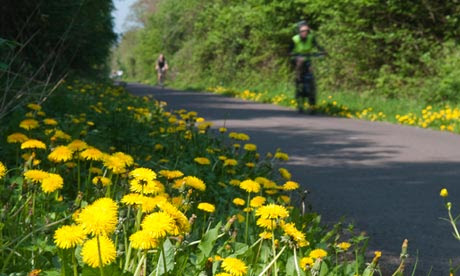 "If you build it they will come" has not always been true of the great British cycling facility. The bafflingly inappropriate pavements, muddy tracks and steps are usually no more attractive than riding on busy roads with fast cars and big trucks.
But the oldest 15 miles of the National Cycle Network prove that if you build it to a sufficient quality they really will come, and they will passionately defend it when it is under attack. The Bristol and Bath path, built in the 1980s on a disused railway between the neighbouring West Country cities, is a rare example of a truly successful British cycle route – sometimes, as in Copenhagen, too successful. Recently upgraded with Bristol's "Cycling City" money, the success of the path can be seen on any weekday morning, even deep in November.
Steve Loughran, a campaigner in Bristol, explains why the path makes such a good cycle route:
"It's direct and sustained from the edge of the city right into the centre at Temple Meads station, never abandoning you at difficult junctions or unfamiliar streets. It's in cuttings and embankments so you aren't interrupted by busy crossroads, and there aren't any trucks passing too close or parked cars blocking your lane."
The Railway Path would not meet modern Dutch cycle path standards, with a mere three metre-wide asphalt surface, and with people on foot and on bicycles sharing that limited space. Even so, in terms of getting people on their bikes, it has worked where promoting riding in urban traffic has not: Sustrans says that this summer the path carried 3,000 cycle journeys per day and even more journeys on foot, with usage growing by 10% every year.
While cycling on Britain's roads is now largely limited to commuter transport – and disproportionately for the young adult male – the Railway Path attracts a healthy mix of users and uses – commuters, shoppers, and parents and children on the school run.
But I think the solution to the Railway Path's overpopularity lies away from the path itself. Its directness, continuity and calm are a great pull, but there is also the powerful push of dangerous and uncomfortable roads. It was built and they came; build more quality safe space for cycling, on all the main routes, and perhaps then they won't all come to this one place.
• Joe Dunckley is a freelance writer and supporter of the Cycling Embassy of Great Britain
Bristol's Railway Path is becoming a victim of its own success | Joe Dunckley | Environment | guardian.co.uk