Skypark and the M5: "likely to become the most carbon intensive location in the area."

A commentator questions the sustainability of District Council plans to relocate:
"EDDC’s green credentials are laughable. They are actively promoting Sky Park industrial estate which alongside the airport is likely to become the most carbon intensive location in the area."

The promotional material for Skypark makes a point that it is 'close to Junction 29 of the M5':
Skypark Business Park - Exeter and East Devon Growth Point
Futures Forum: Knowle relocation project: moving to Skypark... further comment

And there are indeed big plans for expansion along the M5, whether local landowners want it or not:

Meanwhile, back at Junction 29:

Skypark will benefit from excellent transport infrastructure links. Work has already taken place to upgrade Junction 29 on the M5, which will increase capacity and provide better access to the site.

This all begs the question of how 'sustainable' all this 'growth' is...

The M5 and its topology Exeter is already one of the most polluted parts of the country:
POLLUTION on four Exeter roads is giving cause for concern after monitoring revealed levels of nitrogen dioxide are likely to be exceeding targets. | Exeter Express and Echo

http://www.teignbridge.gov.uk/CHttpHandler.ashx?id=34534&p=0
Summary Analysis of Pollution in the Exeter Air Quality Management Areas
The building of the M5 has not actually made things any better: 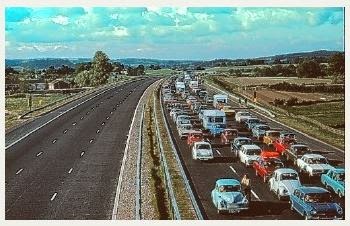 He told me: "I was scanning all of my old 35mm transparencies and came across these two taken at the start of the Whitsun half-term week in May, 1976. It shows holiday traffic on the southbound carriageway of the then relatively new M5 just north of the site of what is now Junction 29."

The M5 was opened to much fanfare and welcomed in Exeter, not just because of the jobs and wealth it was expected to bring but also as the way to end Exeter's long and unwanted reputation as the holiday traffic blackspot of Britain.

On April 9, 1974, the Echo wrote: "A frightening 18 million people will be only three hours drive from the Westcountry when the M5 is completed next year. No one knows with any certainty how the region will cope with the thousands of extra cars which will be tempted to the region by its new accessibility. But more jams, more pollution, more danger and more frustration are inevitable on the region's roads."

And nothing much has changed in the intervening years.

Thirty five years after Phil took his picture there were reports of a 16-mile long jam on the M5 around Bridgwater last Saturday.
M5 didn't end the jams... it just made them wider | Exeter Express and Echo

And then there is light pollution:

See also:
Futures Forum: Skypark and “authoritarian high modernism”
Futures Forum: Knowle relocation project: “Relocation is central to our plans to transform the council into an organisation that meets the needs of our residents and businesses in an accessible, cost effective and joined up way.”
.
.
.
Posted by Jeremy Woodward at 14:39