The way ahead for UK-US trade talks doesn't look all that clear:
Brexit: What are the challenges ahead for a UK/US trade deal? - BBC News
Will a US-UK free trade deal ever happen? - BBC News

However, the boss of Wetherspoon says:

AFTER the epic referendum battle and two years of trench warfare, the UK is approaching a fork in the road.

The key issue for the country today is whether we adopt the free trade approach of hugely successful economies such as Singapore, Hong Kong, ­Switzerland, Australia and New ­Zealand, or whether we ­continue to shelter behind the EU’s high-tariff barriers. 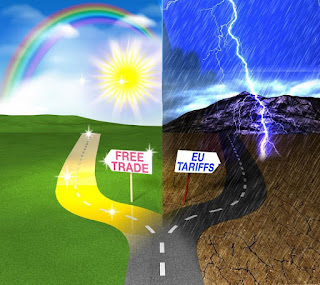 Tariffs are taxes on imported goods, which keep prices in shops and pubs at artificially high levels.

The EU masquerades as a free-trade system, but the ­reality is that it imposes tariffs on imports from the 93 per cent of the world that isn’t a member of the bloc.

Brussels’ unelected chief Eurocrat Jean-Claude Juncker and his autocratic ­acolytes have the temerity to lecture Donald Trump on free trade.

Yet the EU itself keeps prices high by imposing tariffs on more than 12,000 imported products, including rice, coffee, oranges, new world wine, and children’s shoes and clothes.

However, maybe it isn't that simple:

The red tape costs associated with Brexit will cost the UK more than can be covered by free trade deals with non-EU countries, a study has found. Brexit will cause a fall in consumer business pre-tax profit of between 1.1% and 4.2% – even in the case of establishing a new arrangement with the EU Customs Union, it said.

And we need to get straight exactly what we mean by 'free trade':

Libertarians and leftists do not speak the same language when it comes to “free trade” but I think there’s something to be said for what both parties are getting at. I’m going to try to do a bit of translating between them that I think might frustrate both teams, hopefully in a good way.

When decent libertarians talk about “free trade” they’re referring to something deeply anti-nationalist. They’re making a cosmopolitan statement that no one should be inherently more important because of what side of a border they were born on. It’s an almost-socialist belief in the power of dissolving of concentrations of global capital and granting universal access to those pools. They’re saying that tariffs and isolationism are bad because, for example, they suggest that U.S. workers are the primary concern and all others should be obstructed. They’re also of course saying it’s bad because… well it doesn’t work. And to a large extent it absolutely doesn’t. Trump’s tariffs and America First policies are completely regressive. The costs always end up coming from U.S. consumers and then you have situations like Harley-Davidson wanting to move abroad because they can’t get cheap steel from China anymore.

But what libertarians tend not to really grapple with are the real world implications of what is done under the guise of “free trade” especially by monopolies. They’re largely concerned with free trade as it should or could be but are also keen to many of the very concrete and evidenced benefits of global south firms being able to sell goods in a global market. When leftists oppose this idealistic vision of free trade and end up as neighborhood nationalists or Bernie Sanders style anti-trade/anti-migration nationalists, they’re really just practicing a different form of the populist nationalist racism of Trump.

Cue leftists. What the decent leftists are saying when they oppose free trade is that it is deeply neo-colonial and devastates a huge portion of the economy. It creates methods by which colonizer nations and their multi-national corporations can systematically exploit resources from countries that are extorted into accepting whatever devastating terms are handed down to them. It undermines sovereignty and self-determination in the global south. They’re saying that “free trade” as it is, injects giant monopolies into global south economies that devastate the environment, local economies, indigenous campesinos, union structures etc. Almost instantly after a structural adjustment, medium to small size firms became unable to compete as a these giant corporations begin seizing property rights and labor pools. The issue is all about negotiating power and the terms of the agreement.

A really good example is corn in Mexico. Because of the bizarre network of terms and subsidies and the like, huge multinationals backed by the U.S. government (such as Monsanto) began completely cornering the Mexican corn markets. This was particularly disastrous for indigenous farming communities who had been providing corn for their local communities for thousands of years. Suddenly they were getting undercut and having their land bought out from under them in a huge land grab that deeply mimics colonialism. Then comes the massive and unsustainable mono-crop expanses and the influx of patented seeds. Remember that free trade as it’s practiced is DEEPLY pro-IP and uses that as a tool of monopoly. Subsidies get so strange that indigenous and poor Mexicans end up buying corn from the western companies often even after it has already been moved to the U.S. and then is sent back. They’re often prevented from buying directly from farmers. It got so bad that Mexico just straight up banned Monsanto (but are slowly rolling that back). I’m not just pulling this out of my ass either. I’ve sat with indigenous farmers and radicals in Chiapas and listened to their experiences at length. The pain is very, very real and rooted.

If you can’t see why Latin Americans would have deep qualms with this whole quagmire and associate it with the term “free trade” then I’m not sure what planet you live on. The entire anti-globalization movement, despite how anti-cosmopolitan it became, wasn’t just founded and run on empty imaginings. It’s pointing to very real suffering and policy implications.

Obviously there are little mini problematics and critiques and exceptions of a lot of the arguments I made here. For instance, sometimes isolationism is a form of resistance to the knowledge that you will not be able to negotiate fairly and so instead choose to limit trade to nations on the periphery of global capitalism. Additionally there is much to be said about subsistence economies. On one hand it’s much more sustainable and has a deep ties to many indigenous practices, but on the other hand it has many practical costs in terms of livelihoods and access to certain important goods like modern medicines and the like. We could also dive deeply into the vast network of reasons why so called “free trade agreements” have created certain incredible results in one place and devastating results in another. One way that modern “free trade” agreements generate inequality and feed monopoly is the unjust historical acquisition of land titles by monopolists, colonists, and slavers. Here an honest libertarian and a and an open-minded leftist can agree. No libertarian worth their salt could believe that genocide of indigenous populations is equivalent to lawful homesteading. When these modern forms of “free trade” get put into practice, even if they do hold some liberalizing tendencies, they often serve in practice to metastasize existing inequalities that were built upon the foundation of violence. But beneath all of these questions that would deeply divide and tangle a libertarian and a leftist are the complexities of force and the subtleties of coercion.

The libertarian and leftist views of free trade have become deeply at odds with each other but I’m not sure they have to be. It’s more a matter of the historical association of words than irreconcilable differences. For example, thanks to bad actors like Monsanto, important science such as GMO development is disastrously equated with colonialism. Meanwhile you also have closed border isolationists disastrously claiming control of anti-imperialism narratives. With a completely different logic but the same conclusion you can see closed border racists noisily making in-roads in the libertarian community. Free trade as it’s generally practiced, and particularly how it was in the 80s and 90s, is monopolies acting as colonial agents of exploitation and undermining post-colonial sovereignty. But leftists who think that their local economy is inherently more important than the local economy of some other people farther away who want to protect it with state violence are also little mini-fascists.

What we should all be focusing on is undermining monopoly and increasing degrees of freedom. This means not just latching on to the surface level meaning of words and their associations. It means grappling with their deeper meanings, implications, idealisms, and how they actually play out in the real world. It means looking at power through many different lenses and at many different levels at once and being deeply concerned with externalities and unintended consequences.

Center for a Stateless Society » Leftists and Libertarians Don’t See Eye to Eye on “Free Trade”
.
.
.
Posted by Jeremy Woodward at 14:40