A clean energy coop from south-east England:
Back Balcombe 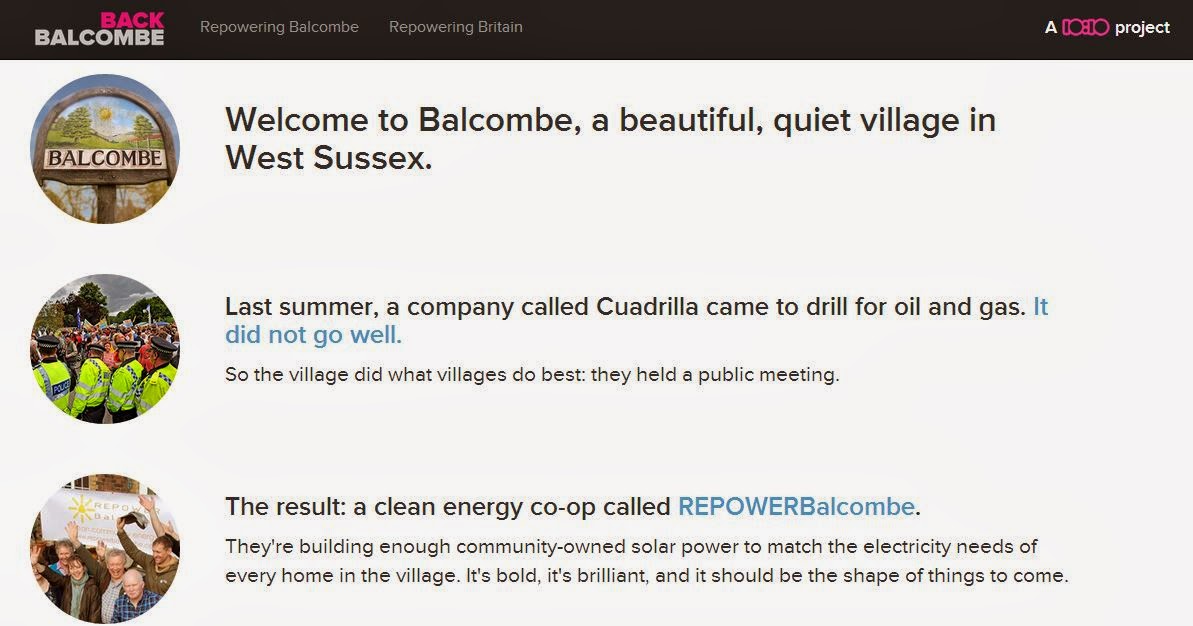 A new project from the carbon-cutting campaign:
About | 10:10

Introducing Back Balcombe: our new project to help Balcombe - and Britain - choose a better energy future

The kids of REPOWERBalcombe, with Angel, the official mascot
Last year, Balcombe got famous for all the wrong reasons.
Targeted to be first in a new wave of oil and gas drilling, the sleepy Sussex village found itself hosting riot police, protesters and tv crews.
This year will be different.
Keen to see a positive, practical response to the divisive fracking debate, residents have set up a clean-energy co-op called REPOWERBalcombe. The goal: build enough community-owned solar power to match the electricity needs of every home in the village.
It's bold, it's brilliant, and (we hope) it should happen everywhere!
That's why we've created Back Balcombe, a national project for anyone who wants to support REPOWERBalcombe's amazing work, and start spreading the repower magic more widely.
We're backing Balcombe, and you can too - visit backbalcombe.org to get started!

Well, they certainly know how to make an entrance.
REPOWERBalcombe stepped out into the sunshine today with a big story in The Times.
The paper's environment editor spent the whole of Wednesday in Balcombe talking to residents and learning about the project. He opens his piece by recalling the criticism one energy company boss leveled at local opponents of fracking:

They have been accused of being selfish and unpatriotic for opposing fracking despite living in large houses and consuming lots of energy.Now residents of the village at the centre of the fracking debate are trying to overcome the impression that they are Nimbys by making their community of 760 homes self-sufficient in electricity. They plan to place thousands of solar panels on roofs around the village, including the local primary school and village hall.

Joe Nixon, spokesman for the co-operative, said: “I get annoyed that people are being cast as Nimbys over fracking. We recognise that we need energy and it has to come from somewhere. We want to choose how Balcombe plays its part in generating Britain ’s energy, and we have chosen solar.”

REPOWERBalcombe in The Times | Back Balcombe

The residents of Balcombe have established an energy co-operative to raise £3m to invest in enough solar panels
Mary Turner/The Times
Ben Webster Environment Editor
They have been accused of being selfish and unpatriotic for opposing fracking despite living in large houses and consuming lots of energy.
Now residents of the village at the centre of the fracking debate are trying to overcome the impression that they are Nimbys by making their community of 760 homes self-sufficient in electricity. They plan to place thousands of solar panels on roofs around the village, including the local primary school and village hall. Welcome to REPOWERBalcombe – a community project to generate enough clean, renewable energy locally to meet all of our village’s electricity needs.
If you live locally and would like to be kept up to date with news on our project’s progress, please enter your email address in the box on the right (you can choose to opt out of these emails any time of course). If you are from outside of the village and surrounding area but would like to support REPOWERBalcombe’s mission, please visit the Back Balcombe website to find out more about how you can help.
For full information on financing our first phase of solar installations, please download the REPOWERBalcombe Summary Document here.

REPOWERBalcombe was born of the inspiring belief that communities can take responsibility for their own energy supply and that this can be done in a way that is clean and sympathetic to the environment.
In September 2013 an open meeting was held at Bramble Hall with a view to setting up a community renewable energy project in Balcombe. Inspired by the positivity of the project, a group of around 14 locals started to lay foundations toward making this a reality.

Our goal is to set up a program of renewable energy solutions based in and around the community. The aim is to generate the equivalent of 10% of Balcombe’s electricity usage through rooftop solar panels within the next 6 months, and eventually to generate the equivalent of 100% of the village’s electricity usage from clean, renewable energy sources. There have been positive responses from landowners in the surrounding area and key local community buildings whose support will be vital to this project fulfilling its aim, and who stand to gain from significantly lower electricity bills. The energy harvested by REPOWERBalcombe will be fed into the national grid, making our village proportionately self sufficient whilst helping to increase the overall amount of renewable energy in our national electricity supply mix.
Our intention is to maintain local control of our village energy project by raising the required funds for our first phase of work through a community share issue. This will open first for people living in our area of West Sussex, and only afterwards to investors from further afield.  We hope you will want to become a shareholder and member of the co-operative. By developing and owning our own power generating capacity locally we will also be helping to power Balcombe’s local economy.
And it won’t only be the host buildings and shareholders who benefit. A portion of the profits from REPOWERBalcombe will be fed back into the community via projects to reduce our collective energy spend (for example insulation and recycling initiatives) and to develop other local renewable energy resources.
This is about our village and how we can live comfortably and responsibly. REPOWERBalcombe will showcase what is possible when a community comes together.  We see this as the start of a repowering the present for the future and hope you will be part of it!

How do we do this?

This spring we need to raise around £300,000 to produce around 224kw of PV solar power.  This is the equivalent of 7.5% of Balcombe’s current electricity usage – or enough to repower 60 of our village’s 760 homes. We have already set up a co-operative (REPOWERBalcombe Ltd, an Industrial Provident Society) and will look to sell investment in the form of shares to the community. Shares can be bought from £250 upwards with the controlling investors coming only from the local area, and we aim to provide shareholders with returns of around 5% per annum (hopefully rising to more like 6.5% if we can secure tax relief under the Enterprise Investment Scheme). The power produced at the installations that make up this first programme of work will also generate around £5,500 each year for our community benefit fund.
Our first site to sign on the dotted line is the third-generation family-run Grange Farm on Crawley Down, who will be hosting 19kW of solar panels on their cow shed in exchange for 33% discounted energy for the next 25 years.
For full information on financing our first phase of solar installations, please download the REPOWERBalcombe Summary Document here.
REPOWERBalcombe
.
.
.
Posted by Jeremy Woodward at 14:21