Following a huge amount of pressure...

... in the form of a petition signed by hundreds:
Say NO to East Devon Business Park | Campaigns by You

The Planning Department asked the immediate neighbours for their views, as they would for a proposed minor extension on a house, but this proposal is massive and will affect huge numbers of people.
For example, a car park for up to 500 cars on the flood plain will require extensive drainage systems which will accelerate the flow of the river and lead to more frequent and powerful flash floods along the valley and through the town and exacerbate the cliff erosion east of the mouth of the Sid.
In Cumbria they have recognised the need to slow down river flows and encourage flood plains to fulfill their function - to absorb excess rainfall, and this is now also being recognised on the Somerset Levels.
Large numbers of signatures on a 38 Degrees petition from the entire region are the beginnings of a commitment to fight for our future. Remember 4000 (four thousand) citizens assembled on the seafront and marched on the District Council offices in 2012, which changed things a lot. Maybe we will need to repeat that event in larger numbers if they don't take notice soon.
Already DCC has reconsidered seriously on the traffic issue thanks to democratic pressure from various sources.

... and a massive response from the public:
Streetlife | Can they really get away with it?
Packed meeting hears concerns over ‘monstrous’ Sidford business park - Home - Sidmouth Herald

... the outline planning application for an industrial estate on the outskirts of Sidford
16/0669/MOUT | Outline application accompanied by an Environmental Statement (with all matters reserved except access) for the development of up to 22,800sqm of floor space for use classes B1 (Office Light Industry), B2 (General Industry) and B8 (Storage and Distribution) with details of, and associated strategic landscaping for, the access, linking cycleway and footway, and flood improvements/attenuation. | Land Adjacent To Two Bridges Two Bridges Road Sidford

On the Streetlife site, there is the cautionary note that this has indeed been an 'outline' application only - and that a more acceptable form will appear later:

PBH about 6 hours ago in Sidmouth
EDDC Planning have just refused Sidford Fields outline application by Fords (16/0669/MOUT) and they have given it a bit of a kicking in their decision notice. Well done them but I guess this will not be the end.

Real Sidmouthian5 hours ago
As Winston said "Now this is not the end. It is not even the beginning of the end. But it is, perhaps, the end of the beginning."

Jenny A4 hours ago
It is very good news and it just shows how every one of our hundreds of objections counted and been listened to. As PP said though, I do wonder if Fords will now go ahead with a smaller development to satisfy the Planning Department. It has still been approved as employment land in the Local Plan.
We won't give up. 1117 signed the 38 degree Petition now. Visitors and residents, all ages, can see the idiocy of an employment site in this location....Think of your neighbours Messrs Fords and Sir John Cave and not yourselves.

The East Devon Watch blog praises the work of the ward Member for her work in seeing this through:

But for now, thank Councillor Marianne Rixon for this.

Make no mistake this is NOT sensible or responsible Tories, or even sensible and responsible planning officers (though they HAVE done the right thing). Our Tory councillors should NEVER have been allowed to sneak in to the Local Plan through the back door.

It is definitely NOT thanks to Councillor Stuart Hughes, who watched it walk through that back door and did nothing.

It is totally NOT thanks to Hugo Swire who did – you guessed it – nothing.

The war is NOT won, this is just the first battle of almost certainly many more, with a powerful landowner. But no doubt Councillor Rixon will carry on her fight.

Controversial plans for a 9.3-acre business park in Sidford have today been refused by East Devon Distirct Concil (EDDC).

A notification was published on the authority’s planning website this afternoon stating the proposals have been turned down.

A report by, Ed Freeman, EDDC’s service lead for planning strategy and development management, details reasons for the refusal.

These include the proposed business park’s impact on the landscape and wildlife and the Area of Outstanding Natural Beauty.

Concerns were also expressed over the road network around the site and a potential increase in traffic. 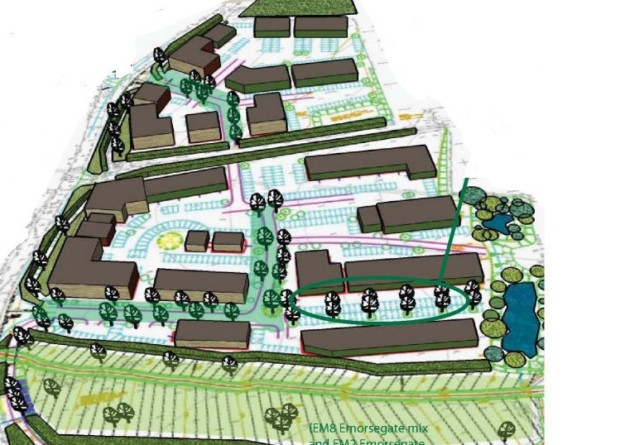 An image from proposals for the business park.

Details of why an application to build a 9.3-acre business park between Sidford and Sidbury was rejected have begun to emerge.

The decision, which had been expected to be made by councillors at a public meeting in the coming weeks or months, was unexpectedly revealed today (Tuesday).

East Devon District Council (EDDC) is yet to comment on the situation surrounding the refusal of planning permission.

However, in a report published today, Ed Freeman, EDDC’s service lead for planning strategy and development management, said: “The application has failed to demonstrate how the quantum and mix of development and the parameters for its scale and massing could be incorporated into this rural location whilst reflecting both the local vernacular styles and reinforcing the existing landscape.

“Without robust landscape mitigation and an associated design code with adequate detail, the development would:

• Result in harm to the landscape;

“It is considered that the proposal therefore fails to meet the requirement for the highest design and landscaping standards set out within the policy which allocates the site for employment development and fails to adequately respect the landscape which is designated as an Area of Outstanding Natural Beauty and which should therefore be afforded the highest level of landscape protection.”

Mr Freeman added: “The proposed development would use access routes that by reason of their inadequate road width (with unsuitable footway provision) and a potentially unsatisfactory junction, are unsuitable to accommodate the increase in traffic likely to be generated by the currently proposed quantum and split of employment uses. In addition the directional split of traffic generation has also not been justified.”

He said that ‘insufficient information has been submitted to justify the noise assessment and its findings that are contained within the Environmental Statement,’ adding: “As such it is not considered possible to accurately understand or assess the likely amenity impact that the development would have on near neighbours or secure appropriate mitigation.”

Mr Freeman also said: “No mechanism has been submitted to secure necessary contributions towards or the management and maintenance of both the hedgerow bounding the proposed cycle route and the surface water attenuation and drainage scheme proposed. In addition there is no mechanism to secure the necessary junction assessment in respect of Sidford Cross which is likely to require an improved signal system and which falls outside of the identified strategic infrastructure list associated with the adopted CIL [Community Infrastructure Levy] charging scheme.”

The Save Our Sidmouth site had already pointed to the significant intervention by the County Council's highways department over its concerns:

Following a democratic deluge of informed comments, letters, photographs and relevant videos, the Head of planning, transportation and environment at Devon County Council has revised its response to Fords’ application for planning permission.

The recommendation is: “The road giving access to the site is by reason of its inadequate width and junctions unsuitable to accommodate the increase in traffic likely to be contrary to paragraph 32 of the National Planning Policy Framework.” The full text of the response is copied below*.

As reported in the Sidmouth Herald, Fords have just sold their plumbing and electrical business to Clearvac International and will be free to “focus on their property business interests”.

Of the 387 individual comments sent to EDDC – only two are in favour of the development.

The County Highway Authority (CHA) has considered the application in the light of the Local Plan Strategy 26 – Development at Sidmouth, and the more detailed information contained in the application.
Recommendation:

THE HEAD OF PLANNING, TRANSPORTATION AND ENVIRONMENT, ON BEHALF OF DEVON COUNTY COUNCIL, AS LOCAL HIGHWAY AUTHORITY,

1. The road giving access to the site is by reason of its inadequate width and junctions, unsuitable to accommodate the increase in traffic likely to be contrary to paragraph 32 of the National Planning Policy Framework.

And well over 1000 people have already signed the 38 degrees petition. To add your name, go to https://you.38degrees.org.uk/petitions/say-no-to-east-devon-business-park

Meanwhile, the company behind the application has a new owner:
Sidmouth man David seals deal for Clearvac to take over Fords’ services - Home - Sidmouth Herald
.
.
.
Posted by Jeremy Woodward at 14:29