The South West Coast Path is the jewel in the crown: 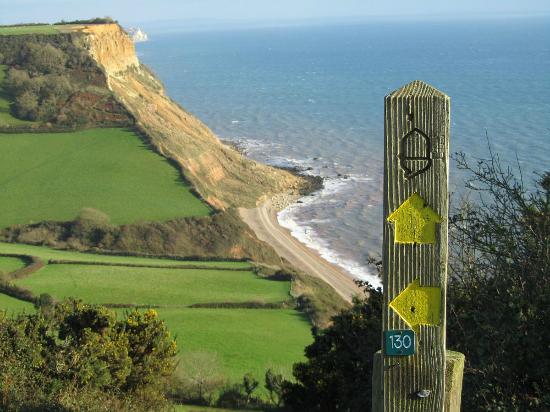 And the route has just received a real boost:


A PROJECT to raise the international profile of the South West Coast Path is expected to bring extra tourists to the region.
The South West Coast Path Association has successfully applied to the Discover England Fund, which aims to support the growth of tourism.
The project, ‘Discover England’s South West Coast Path’, is to be delivered by a number of partners; Visit Cornwall, South West Tourism Alliance, Jurassic Coast World Heritage Site, Visit Devon, Visit Dorset and Exmoor National Park. The funding is administered by VisitEngland, who is responsible for marketing and developing England’s tourism.
Research has shown that the most sought after information on the Visit England website is about the countryside of the South West, with finding out about history and heritage close behind.
The South West Coast Path Association will address this demand by improving the ease of access to a holiday exploring the coast of the South West.  It will create a range of three, five and seven day holidays, with mix and match visitor itineraries with an easy click through method for people to purchase what they need.
The project will be supported with new digital resources, promotion on regional tourism and Visit England websites as well as a public relations campaign, attendance at trade shows and online/social media advertising.
Esther Pearson, Director, South West Coast Path Association said: “The coast path is the region’s most popular tourist attraction. This range of new speciality materials will help visitors to plan and enjoy their holiday in this beautiful part of the world.”
The South West Coast Path is a world class destination; it was listed as one of the World’s greatest walks by Lonely Planet in 2009 and was the only UK walk to feature in their 2012 Book of Great Adventures. Twice running it has been voted Britain’s Best Walk by the readers of Walk Magazine. More recently it was listed by CNN Travel Guide as one of the world’s most awe-inspiring long distance hikes.
The holidays will feature active, historical and cultural breaks, including those at locations of the World Heritage sites in Dorset and East Devon and West Cornwall. There will be particular themes such as film and TV, local cuisine and a celebration of the region’s literary and artistic wealth. Target markets are Germany and the Netherlands, as well as other international tourists and domestic visitors. This project will aim to expand visits beyond the summer season.
Project to promote coast path in bid to boost tourism - View News
.
.
.
Posted by Jeremy Woodward at 15:10