The promises of devolution in the South West

There are big questions around the increasingly empty promises of 'devolution'...

Firstly, it all seems to be turning into a bit of a scam - with no money to be had:
Futures Forum: When and how does devolution become a scam? >>> >>> "The LEP for Devon & Somerset is enjoying a windfall, while public services are cut…"

DEVOLUTION “OFF THE TABLE” AND “THE MONEY HAS ALL BEEN SPENT”!

Owl says: where HAS all the money gone, Mr Hindley?
And why are the “same old” people who spent it all but failed to give us a devolution package we could all sign up to now trying to capture a new group to keep future money in the “same old” hands?

“South West business must pull together to unlock regional prosperity, a regional business leader has warned.
Steve Hindley, Chairman of Heart of the South West LEP, said that the only way to unlock government cash is to present a unified front. And he revealed that a devolution deal for Devon and Somerset is effectively off the table for now.
He was speaking about his wishes for the region at the Devon and Cornwall Business Council spring conference held at Flybe Training Centre at Exeter Airport today.
He said: “What I would like to see doesn’t involve government. I would like to see more co-ordination in the South West with the industrial strategy for our aeronautical, marine, food, nuclear, data analytics and creative sectors. We have got an enthusiastic bunch of business people that are leading in the agenda and that’s the way the Government begins to take notice of the South West. It is my wish that we get our act together before we go to government.”


Devolution “off the table” and “the money has all been spent”! | East Devon Watch

SOME QUESTIONS ABOUT THE HEART OF THE SOUTH WEST LEP

If the Heart of the South West LEP is “dead in the water” and “there is no money left”
Local Enterprise Partnership version 2 – Devon, Cornwall and Dorset | East Devon Watch

> Where is the £25,000-plus coming from to pay someone to encourage a new threesome of Cornwall and Isles of Scilly, Devon and Dorset?
> What’s happening about the divorce from Somerset and are we paying that county’s expenses still?
> HOTSW LEP is the vehicle for taking business rates from Enterprise Zones such as the East Devon Growth Point – if it’s defunct what happens to that money?
> Who pays Mr Garcia’s salary and those of the 3 or 4 other employees who presumably now have no jobs? Somerset or Devon?
> What’s happening about the “Golden Triangle LEP”?
> Where does “Greater Exeter” fit in and with whom?
> East Devon – where do we fit in? Our Leader is a HOTSW board member and is responsible for HOTSW housing. Is he still responsible for housing in Somerset, Greater Exeter and/or the “Golden Triangle”?
> What is DCC’s/EDDC’s role in this – where was it discussed, when and by whom?
> Where are the minutes of the meeting where the current deal was dropped and a new deal thought up?
> What does Somerset think about all this?
> Do YOU recall being consulted on any of this?

WHAT IS OUR LEP DOING FOR EAST DEVON?

Want to know which LEP projects are active in our area? Click below. But Owl can save you time – none!
The nearest are Exeter’s Bridge Road widening scheme and the A379 Newcourt Junction changes to serve Ikea, the rugby club and the latest housing estate there: http://heartofswlep.co.uk/projects/

What is our LEP doing for East Devon? | East Devon Watch

Then there is the promise of 'Greater Exeter':

Owl says: Read with the post below Owl thinks there will be more than one “New Cranbrook” in the Greater Exeter area!

“Consultation events held in Devon this week shed light on the creation of a major strategic blueprint, which could lead to new settlements on the same scale as Cranbrook.
Mid Devon, East Devon, Teignbridge and Exeter City Council, in partnership with Devon County Council, are teaming up to create a Greater Exeter Strategic Plan (GESP) which focuses on the creation of jobs and housing until 2040.
Hundreds visited Exeter’s Guildhall today to see early Greater Exeter plans between 2pm and 8pm. Similar consultations were held at Phoenix House, Tiverton yesterday and at Mackarness Hall, Honiton on Wednesday, March 8.
Andrew Robbins, city development manager for Exeter, said: “We need to provide more houses for the population and more jobs. What we’re looking to do is plan for the next 20 years, with Exeter City Council working with its neighbours because we see the influence of Exeter outside its boundaries. We’re looking at the best places for new housing and the best places for new jobs.
“For example, the new settlement at Cranbrook has been developed in recent years. One of the things we’re thinking of is ‘do we need another settlement outside of the city.'”
“What we want to do is get people involved in the process at what we call the issues stage. This is the absolute beginning of the process and its asking people for their ideas for how they see the region developing, before consulting on a draft plan at the beginning of 2018.”
Greater Exeter Plan could lead to a 'new Cranbrook' | Devon Live

But still the promises are being talked up - with the 'Heart of the South West' expanding to cover the whole of the West Country: 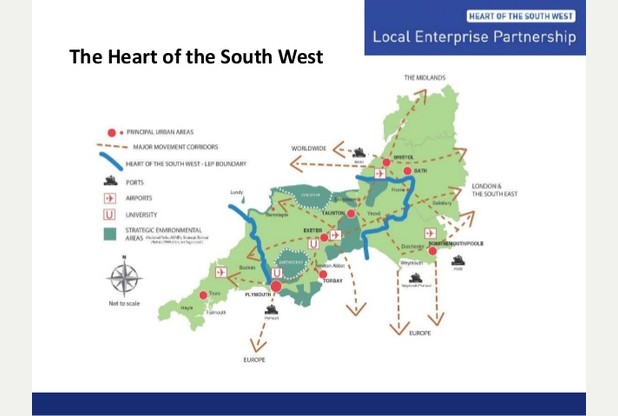