Months down the line and it appears there are more uncertainties to be resolved:
Straitgate Action Group: Straitgate application delayed as EA requests more information

But things are apparently being 'resolved' - according to this very firely piece from the Straitgate Action Group:

‘DCC’s job is to deliver Straitgate’

Aggregate Industries’ quest to quarry Straitgate Farm has been a long-running and sorry saga. Anyone hoping that its latest planning application would be decided on its merits - weighing up the multitude of conflicting issues - will be disappointed.

In fact, in the rush to make the 6 September DMC meeting, had it not been for the EA’s concerns, DCC was preparing to write its report for councillors - 10 days before the consultation had even ended.

Why DCC’s rush? Are we to believe that the 61 substantive points raised in the Council’s Reg22 requesthave all miraculously been resolved, together with the myriad of material issues raised by local people on traffic safety, cattle crossings and the like? No, of course not; the cumulative impact of a 4x daily cattle crossing and up to 200 additional HGVs daily on Ottery’s busiest road hasn’t even been assessed!

So why is DCC so determined? The Council says 'Development Management’s job is to deliver what’s in the Devon Minerals Plan'.

Ah yes, the Devon Minerals Plan. The Plan that was delayed for years, as the Minerals Officer bent over backwards to accommodate AI - ignoring valid arguments from hundreds of people, ignoring warnings over processing, site access, resource figures and land ownership issues. The Plan that, at the last moment, took away the 1m of unquarried material to protect peoples’ water supplies so that AI’s resource figures would stack up:

The Plan that still laughably claims:

Was a planning application to truck 1.5 million tonnes of as-dug material 23 miles away to be processed, from the "southern parts" to the "northern parts" - where 4 million tonnes of permitted reserves still lie in the ground - what the Minerals Officer, who stubbornly advocated Straitgate for the best part of 5 years, had in mind? We warned that the southern/northern logic was "a flawed and misguided proposition", and so it proved.

Although you’d never know it, Straitgate’s designation was actually downscaled in the Minerals Plan. Originally a Specific Site - where "the proposal is likely to be acceptable in planning terms" - it now forms part of Policy M12 as a Preferred Area - "where planning permission might reasonably be anticipated". What does "reasonably" mean? A fair chance, a moderate chance? Whatever it means, it’s far from certain. The Minerals Plan provides for this:

But remember, Policy M12 is just ONE of the policies in the Plan. And as DCC reminds us - in BOLD:

Why is DCC pushing one part of M12 in isolation of other policies? Perhaps DCC thinks that some policies should have more weight than others? Perhaps DCC thinks that the policy that helps the bottom line of a Swiss multinational, should have more weight than the policies to help safeguard our planet, "minimising transportation by road and generation of greenhouse gases", Objective 1, et al? Aren’t any climate alarm bells ringing at DCC yet? None at all? Because even the Minerals Plan warns us that:

Could it be that DCC’s hands are tied; that it has no choice but to push Straitgate? What therefore is the role of Development Management?

Development Management is an integral part of the spatial planning process; it puts spatial development plans into action and seeks to achieve good design and sustainable development

And what does the NPPF have to say?

No prizes for working out the common phrase in each. Planners should work "proactively" when applicants are delivering sustainable development.

But what if applicants are NOT delivering sustainable development? How much bending over backwards with public money should the Council be doing then, for an international cement conglomerate?

Because, however you frame it, a 2.5 million mile haulage plan to a mobile processing plant further away from its target market, CANNOT be deemed sustainable development by any stretch of the imagination.

So why is DCC so focused on delivering Straitgate, smoothing the way, greasing the wheels, overlooking fineable offences and failure to give notice to people whose land is affected, overlooking the fiction and falsity, letting AI come back with report after report in an effort to make things work? Is there something we don’t know about? Is it all a stitch-up?

Meanwhile, there is now the question of giving cows a bit of space:
Straitgate Action Group: Queues of over 100 vehicles from cattle crossing makes AI’s plans unworkable 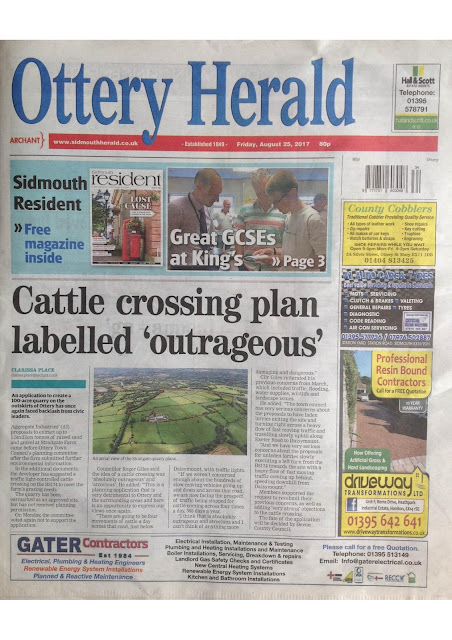