The cost-benefit sums of tourism are difficult to calculate:
Futures Forum: "Objections to tourism are often contradictory"

It's clear that locals don't generally 'benefit':
Futures Forum: "Struggling to adapt to the challenges posed by a booming tourist sector: money comes in from outside, pushing prices up, forcing the locals out, second homes proliferate and the traditional activities that define a place become little more than window-dressing."

And many of these same places are being overwhelmed by migrants from other parts of the country:
Futures Forum: The impact of migration: "More people move to East Devon than nearly anywhere else in the UK"

On the one hand this puts the price of housing up for the locals:
Futures Forum: "Bad news for people trying to get on the property ladder" >>> Sidmouth's property inflation rate is one of the highest in the country

With attempts to limit the market proving very difficult:
Futures Forum: Knowle relocation project: planning application rejected again by Town Council: 85% of the development should be restricted to local residents

On the other hand, the only jobs available are in the badly-paid and seasonal hospitality industry:
Futures Forum: Low wages in the South West

With the only people who can afford to take on these jobs being migrants from outside the country - who are generally housed in staff accommodation blocks:
Futures Forum: Brexit: and the hospitality industry >>> migrant labour and low-wages

A solution, as in St Ives, is to ban any new second homes:
Futures Forum: The South West: "This is where the young people are struggling to get on to the property ladder which is why towns are banning holiday homes."

But it's proving very difficult to create high-income jobs:
Futures Forum: The empty promises of 'Job creation' - and the real possibilities from 'entrepreneur-led revitalisation' and the 'return of a spirit of self-reliance'

It's certainly not about 'investing in infrastructure' that will help - as roads just bring in (and take away) the tourists:
Futures Forum: What transport infrastructure do we want for East Devon?

A letter in the Observer points to Cornwall and its over-reliance on its 'unskilled, low-paid and part-time employment' - where the locals are being priced out of the housing market: 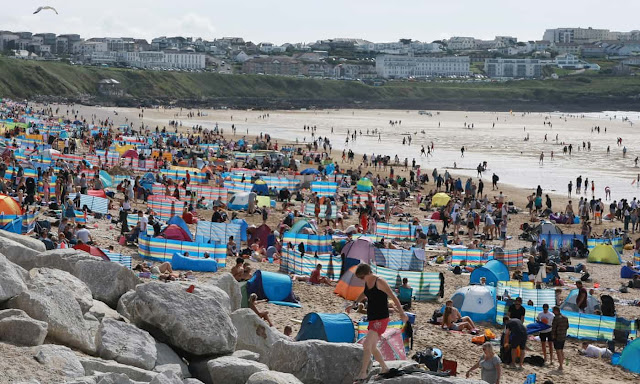 Tourists on the beach in Newquay in August. Photograph: Graham Stone / Barcroft Media

Elizabeth Becker (“Only governments can stem the tide of tourism sweeping the globe”, Comment) does not have to look as far as Cambodia, Afghanistan or Thailand. Just look at the tourist regions of the UK.
Cornwall is a major tourist area, but its economy is one of the weakest in Europe. EU investments, together with “matched funding”, have injected around £1.5bn into the region, but this has had little impact on raising GDP.
One of the biggest stumbling blocks has been the perception by successive governments that the Cornish economy is synonymous with tourism, with its focus on unskilled, low-paid and part-time employment.
Cornwall is being directed to build 52,500 houses before 2020. A large proportion of these will be bought as holiday homes or by people retiring to Cornwall. This large-scale “immigration” has vastly distorted the housing market. People employed in tourism cannot afford these houses. Perhaps Cornwall’s perversity in delivering a very large pro-Brexit vote was because there are so many middle-class retired incomers who are putting stress on the social and health services .
Tourism is supposed to generate billions of pounds, but very little of this “sticks” in Cornwall because much of it goes to the major supermarkets, which employ unskilled people on low pay.
Government (and the Cornish will not forget the Brexiters’ claims that EU funding would be replaced by central government) must encourage high-value opportunities, such as those within the digital industries that are beginning to grow in Cornwall. And perhaps government should improve the social and health services, digital connectivity and rail and air infrastructure, rather than pumping more money into roads that primarily serve tourists.

See also:
Futures Forum: Low wages in the South West
Futures Forum: "Bad news for people trying to get on the property ladder" >>> Sidmouth's property inflation rate is one of the highest in the country
Futures Forum: "A staggering 50,000 manufacturing jobs have been lost in the South West in a decade." Which is not surprising, as "the LEP area ranks 32nd out of 39 LEP areas in England for the level of productivity."
.
.
.
Posted by Jeremy Woodward at 01:00