Latest plans for Alma Bridge to be considered by Town Council

Earlier in the year, moves were at last afoot to 'do something' about Alma Bridge:
Futures Forum: Replacing Alma Bridge to secure a lifeline for both residents and visitors alike
Futures Forum: “Before effectively closing Alma Bridge permanently to all but able-bodied pedestrians, I suggest that someone now co-ordinates action to reduce cliff erosion.”

And will look at new plans on Monday: 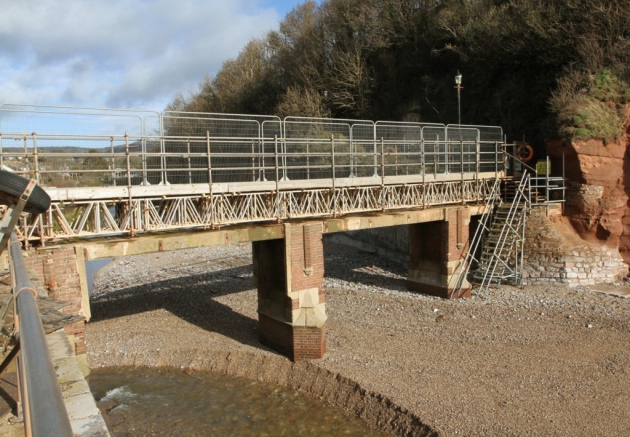 Updated plans for a footbridge to replace Alma Bridge – keeping it accessible to parents with prams and people with mobility difficulties – will be presented to town councillors on Monday (November 6).

Devon County Council (DCC) previously put forward proposals for a structure over the River Sid which included short flights of steps at either end of the bridge.
It is now proposing short sections of steep ramps instead of the combination of steps and ramps that had previously been agreed, and supported by Sidmouth Town Council. The steepest ramped sections would be at a gradient which matches that of Hanger Path on the east of the River Sid.
Councillor Stuart Hughes, Devon’s bridges chief, said: “Making the bridge available to all users is good news for everyone. With the previous design, we had been looking at improvements that could be made to the alternative route, for those who couldn’t access the proposed new footbridge.
“At the same time, we’ve been continuing to see how we could adapt the access to the planned structure. We hope these modifications are also supported by the town council to make it a bridge for all.”
The footprint of the scheme, which would be around 40 metres upstream of the existing bridge, remains the same and does not take up any more land or impact on the Ham.