That's all good then.

But these press releases simply belie the reality that local government is desperately struggling with its finances, as shown through much of last year:
Councils “dangerously close to brink” as half plan to cut spending on vulnerable children — The Bureau of Investigative Journalism (February)
County councils in crisis: three more named as showing signs of financial distress — The Bureau of Investigative Journalism (March)
UK public finance: councils build a credit bubble | Financial Times (April)
By 2020 our local councils will be in utter financial chaos – but the government has chosen to do nothing | The Independent (June)
Don't blame councils for the harm done by government ideology | Joanne Fry | Society | The Guardian (August)
Austerity Has left councils At Breaking Point, Westminster Must Give Them The Money They Desperately Need - StephenKinnock.co.uk (September)
Budget a ‘sticking plaster’ rather than sustainable, public sector experts agree | Public Finance (October)
When council leaders petition No 10 to end austerity, things are bad | Polly Toynbee | Opinion | The Guardian (October)
Britain’s Austerity Has Officially Ended—and Yet It’s Still Going | The New Yorker (November)

In December there were calls to allow local government to tackle homelessness
Increasing use of temporary accommodation disruptive council chiefs say - LocalGov.co.uk - Your authority on UK local government

And at the beginning of the year, local government finance is still very much in the news - with a view from the Gulf:

As the crow flies, London is about 100 km away to the southeast, and Birmingham about 70 km away to the northwest, putting Northampton pretty much in the centre of England. And right now, the city of 215,000 and surrounding county that’s home to another 500,000 more, is pretty much at the centre of a funding crisis — one that is playing out across England and Wales, and is having a very dramatic and immediate effect on people’s lives, much more so than the political shenanigans under way at Westminster, and the UK’s place in Europe.

No, it’s not a story of gross misspending of resources or a waste of money — like at least 35 other local government councils up and down the UK, it simply can’t raise enough funds to keep its services going, receives too little from the Westminster government in London, and can’t continue to provide the level of services required by law — looking after the elderly, fixing roads, contributing to policing, maintaining infrastructure, collecting rubbish, caring for children in crisis, keeping street lights turned on and books in libraries.

Across the UK, funding for local governments has fallen by at least 60 per cent since 2010, and by the time 2020 rolls around, there will be a staggering £21 billion (Dh96.7 billion) shortfall in funding for councils. Councils are the lowest levels of government, and can levy a tax on homes and charge fees for some services as well as collecting a nationally set tax on commercial properties and keeping a share of it. But for years, they depended on funds from Westminster — and since 2010, under the Conservative government’s policy of austerity, the councils’ funding has largely dried up.

Northamptonshire council just about has enough money to pay for basic mandatory services — everything else has stopped — and two outside commissioners have been appointed from London to oversee its activities and finances.

“I was a believer that we had to save money, but there had to be other ways than to slash and burn,” explains John Ekins, a Conservative councilor in Northamptonshire. “How did we get to where we are? What the hell has been going on?”

His frustration echoes across the country. One in 10 of the larger councils that have obligations to care for children and elderly people — about 35 councils in all — are in danger of exhausting their reserves within the next three years, according to the National Audit Office.

Northamptonshire was the first flashing red light. East Sussex County Council, run by Conservatives, recently announced it would reduce services to the “legal minimum.” The Conservative-led county council in Somerset warned it might be facing bankruptcy too.

“UK local authorities are heavily reliant on central government grants — the Revenue Support Grant — which has historically accounted for 70-75 per cent of the income of local authorities,” explains Dr Philip Catney, a senior lecturer in politics at Keele University and a specialist on local government. That has been nearly halved between 2010 and 2018.

“At the same time, local authorities are finding that social care and other statutory duties costs are increasing without a sufficient match in the funding from central or local sources to match the need,” he tells the Weekend Review. “Such a dramatic deterioration in the financial position of local authorities with increased demand on services was always going to end up problematic. Local authorities have cut back significantly on the services they offer and have made numerous efficiency savings but there are not many more savings which can be made now.”

Obviously, raising the revenue support grant would be a start but also increases in the scope for local taxation rises would be helpful, Catney says, though such a move would almost certainly be unpopular with local people...

And a view from local government professionals:

No end to austerity for local government


Dr Mia Gray and Dr Anna Barford, both of the University of Cambridge, argue that the ghost of austerity continues to haunt the local government landscape as many councils struggle to offset often profound budget cuts – especially across England.

On 2 October, in the prime minister’s speech to the Conservative Party Conference, Theresa May heralded the end of austerity. She said that “after a decade of austerity, people need to know that their hard work has paid off.” Speaking in the past tense, May asserted: “Public sector workers had their wages frozen. Local services had to do more with less. And families felt the squeeze. Fixing our finances was necessary. There must be no return to the uncontrolled borrowing of the past. No undoing all the progress of the last eight years. No taking Britain back to square one. But the British people need to know that the end is in sight. And our message to them must be this: we get it.”

After this announcement, the chancellor’s spending plans were somewhat watered down, as he phrased it as “austerity is coming to an end” rather than being over. Of course, semantics aside, his spending plans, while offering a boost to social care spending, have not fundamentally altered austerity – and particularly not altered it for local government. 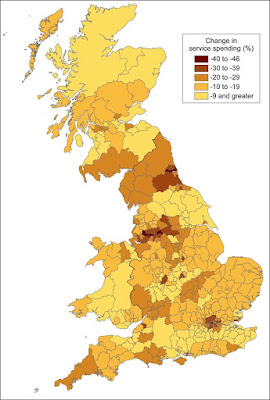 Our research on local government spending cuts in the UK offers a chance for local authorities to compare their position to others in the country. We used data from the Institute for Fiscal Studies, calculated to enable comparisons between different local authority areas, and removed spending on the services which have changed so dramatically that comparison over this time period is impossible. We can see that while the cuts in the central government grant are proportional across the country, actual cuts to service spending vary enormously.

However, because the importance of the central government grant as a proportion of the total local government budget varies by such a large percentage, across-the-board austerity cuts in council spending have fallen most heavily on those local areas with the greatest need. This is only exacerbated by differences in the ability to raise revenue locally – through taxation and fees, the size of reserves, and the value of prime land and buildings...

No end to austerity for local government - public sector executive
.
.
.
Posted by Jeremy Woodward at 12:11