The main aim of the project generally, and echoed by the towns locally, is to raise awareness of sustainable living and build local ecological resilience in the near future.
The Transition concept emerged from work that permaculture designer Rob Hopkins had done with the students of Kinsale Further Education College in writing an "Energy Descent Action Plan". This looked at across-the-board creative adaptations in the realms of energy production, health, education, economy and agriculture as a "road map" to a sustainable future for the town.
The number of communities involved in the project is increasing with many localities in the process of becoming "official" transition towns.[18][19] Transition Towns has even featured in the plot line of the long-running BBC Radio 4 series The Archers,[20] which illustrates the media attention and rapid growth the movement is generating.
Transition Towns - Wikipedia, the free encyclopedia 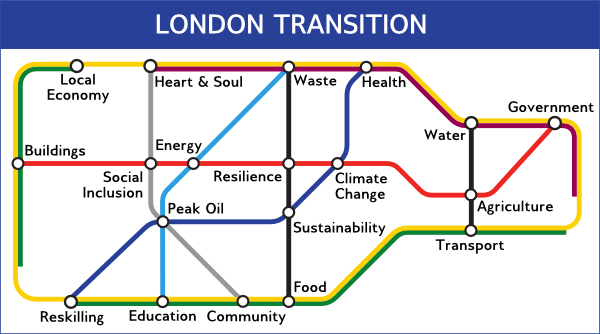 Transition towns | Environment | The Guardian
.
.
.
Posted by Jeremy Woodward at 15:12