The beach huts at Jacob's ladder were severely damaged by storms last winter/spring: 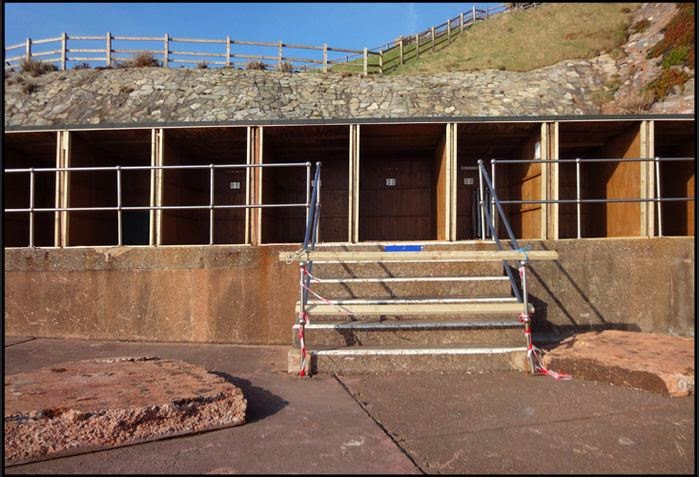 The District Council has invested considerably in repairing them:

The beach huts at Jacob's Ladder that were severely damaged during the winter storms are now completely repaired and ready for the summer season. Photo by Simon Horn.

Indeed, the District Council has comitted more sums to its huts right along the coast:

East Devon District Council cabinet has recommended that an extensive refurbishment and replacement programme be put in place to improve the current provision of its popular beach huts and chalets at Sidmouth, Exmouth, Budleigh Salterton, Seaton and Beer.

A fund of £19,000 will be established, which will enable new beach hut schemes to be created. It will also mean that old huts, which have reached the end of their life, can be replaced.

Tenants will also be expected to commit to their beach hut or chalet conforming to a realistic design, style and colour, in keeping with the overall scheme.


However, there is considerable cynicism about the exercise, as expressed in the comments to the Express & Echo article:

Then they will have to issue a consultation document to EA,NE, RSPB,RSPCA, Devon Nature Trust, The Barn Owl Trust. The Bat Society The Butterfly Trust and Tiggywinkles in case a bird or animal may be disturbed. Then we need Health

and Safety method statements and highways will have to be involved in case they can squeeze in 5 metres of cycle path. That's £18,500 spent which leaves £500 to spend on the huts themselves.

I'm surprised EDDC hasn't commissioned a feasibility study to see if the beach huts would be suitable for council offices ....

Moreover, the beach huts bring in considerable revenue for the District Council:

This might explain why the District Council is so keen to have more beach huts along the front in Sidmouth - but the proposal is raising a lot of concerns.

The District Council's Cabinet considered and agreed to a series of proposals for its beach huts in its report: "Asset Management – tenanted non-residential property review: Beach huts and chalets asset cluster"
Minutes of the meeting of Cabinet held at Knowle, Sidmouth on 7 January 2015

The mock-up photo in the Herald shows the impact of the huts on the three cottage orné: 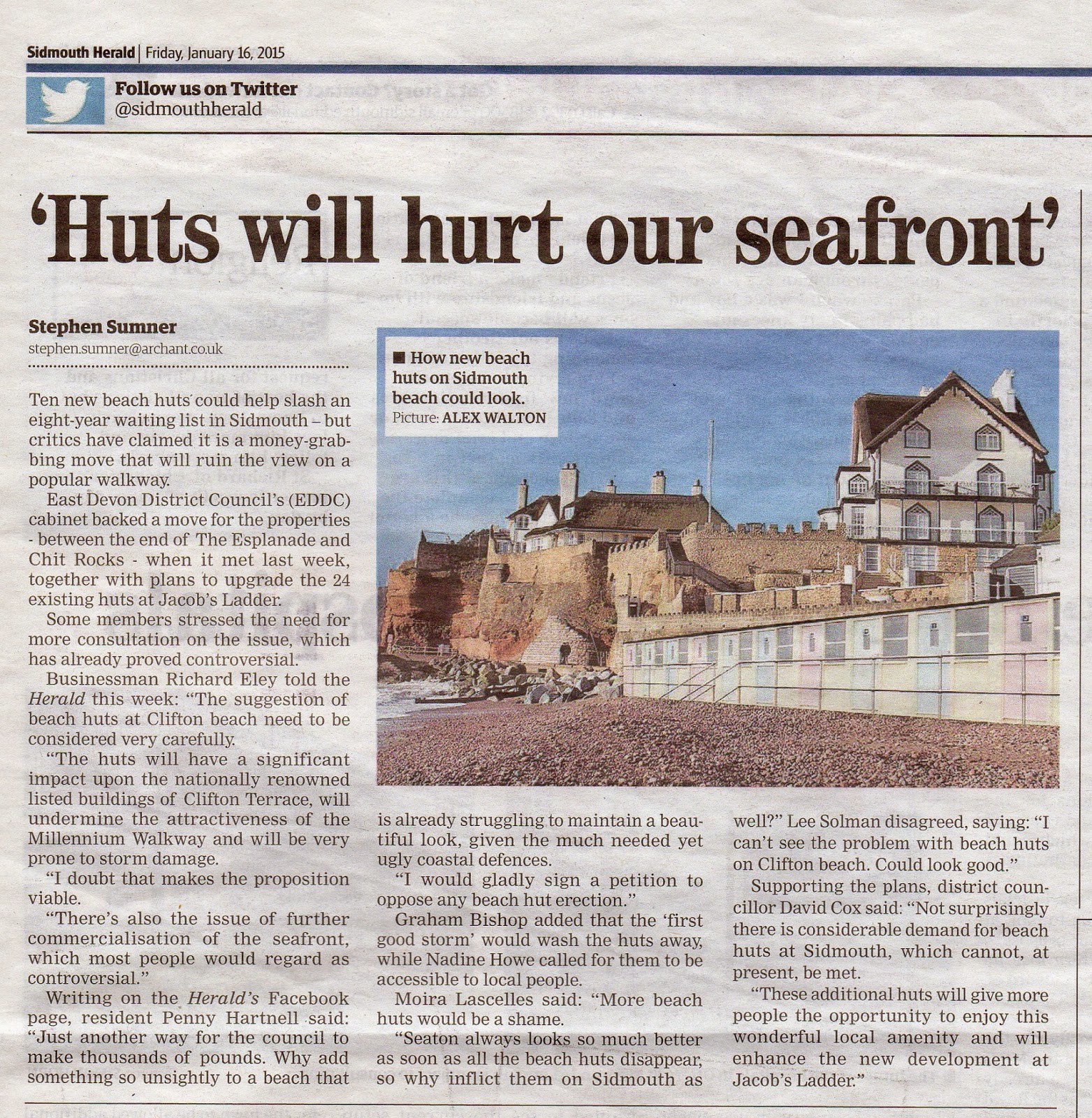 There are also fears that this 'development' would impact on the beach garden planted by Sidmouth in Bloom and other groups:
Futures Forum: Biodiversity in Sidmouth: Beach Garden

In fact, the garden had to be completely restored after last winter's/spring's storms - which raises the question of how safe any new beach huts would be:
Bid to restore popular beach garden - News - Sidmouth Herald

However, the proposals for Sidmouth are "subject to planning permission and viability assessment":
Minutes of the meeting of Cabinet held at Knowle, Sidmouth on 7 January 2015

This comes on top of the District Council proposing to remove beach huts in Exmouth - despite 'waiting lists':


A third of seafront beach huts could disappear in facelift

Beach huts
A third of Exmouth seafront’s 117 beach huts will be dismantled by 2016 to make way for the Queen’s Drive regeneration.

East Devon District Council’s cabinet last night (Wednesday) debated proposals to remove 37 of Exmouth seafront’s publically-owned beach huts.
Council bosses say that out of all of East Devon’s resorts, demand for chalets in Exmouth is the lowest. It was recommended that the existing huts and chalets should be ‘absorbed’ into the regeneration of the seafront.
Councillor Eileen Wragg told the Journal: “It’s a similar situation as the Elizabeth Hall, with East Devon District Council deliberately allowing a valued Exmouth asset to fall into disrepair as an excuse to get rid of them.”
A district council spokesman said: “EDDC is undertaking a widespread and ambitious regeneration programme for much of Exmouth seafront.
“This includes a new hotel currently under construction, with the income from the site being reinvested in Exmouth amenities, like an improved slipway at Mamhead and a new public toilet block next to the rowing club. The 37 huts would be displaced by the possible realignment of Queen’s Drive, under the council’s aspirations to redevelop the existing car park and diner area as a water sports and leisure zone. The 37 current leaseholders have been informed and any who wish to do so will be given first choice of any (new) huts with effect from the 2016 season.”
A third of seafront beach huts could disappear in facelift - News - Exmouth Journal

There have been some wry suggestions of what to do with these huts once they are removed:
> That they would make a cheap HQ building for Honiton:
Futures Forum: Knowle relocation project: a suggestion for the new District Council headquarters in Honiton...
> That they could 'do a Tracey Emin' and become an art installation:
Futures Forum: "Not fit for purpose" ... What shall we do with the unwanted Exmouth beach huts? ........ Bulldozing one set of assets whilst subsidising another

But the more serious point is that it does seem as though the District Council's is being not only inconsistent - but is not taking heed of the wishes of local people, whether in Exmouth or Sidmouth

> On the one hand the District Council is declaring an 'ambitious regeneration programme' in Exmouth which means destroying beach huts - and on the other a desire to 'enhance development' in Sidmouth which means imposing largely unwanted beach huts.

This is not about 'localism':
Futures Forum: LOCALISM restated >>> "Power should be decentralised down to the lowest appropriate level - to councils, to community groups and to individual taxpayers"

And this is not about taking care of assets:
Futures Forum: Knowle relocation project: and the 'managed neglect' of valuable assets

... or about taking care of heritage:
Futures Forum: "Caring about buildings ... is another way of caring about people."
.
.
.
Posted by Jeremy Woodward at 15:19