Last month, the National Housing Federation held a rally on the issue:
Futures Forum: Shared ownership: rally in Westminster Tues March 17th >>> calling on politicians “to commit to end the housing crisis within a generation”

The fear is that nobody's listening:

Protesters try to force affordable housing up the election agenda Banners outside occupied flats as members of the group, E15 Mothers staged at a sit-in in September 2014 of the almost empty Carpenters estate in Newham to highlight the lack of affordable housing in London. Photograph: Jay Shaw-Baker/Demotix/Corbis

Over 2,000 people are to rally in Westminster in a bid to force the shortage of affordable homes up the general election agenda amid fears neither the Conservatives nor Labour will make the housing crisis a campaign priority.

Tuesday’s “Homes for Britain” event – the largest protest yet at successive governments’ failure to address the shortage of affordable housing in the UK – comes as campaigners voiced disappointment at Labour’s refusal to include housing on its five-point election pledge card and the social housing sector’s fear that the Conservatives’ campaigning is focused only on home ownership.

The national event follows a series of local protests against alleged “social cleansing” by landlords replacing affordable housing with more expensive units for sale. Campaigns at the New Era estate in east London and in Chelsea at the Sutton Estate have been backed by the comedians Russell Brand and Eddie Izzardrespectively. On Tuesday night, Brand is set to lead a “sleep-over” at the threatened Sweets Way estate in Barnet.

Campaigners from across the country will converge on Westminster for a rally that will see speeches from the Conservative party chairman, Grant Shapps, the Ukip leader, Nigel Farage, and the Labour communities spokesman, Hilary Benn. Also addressing the crowd at the Methodist Central Hall will be Ken Loach, who made the film Cathy Come Home in 1966 about a family made homeless by eviction, as well as the heads of the TUC, Frances O’Grady, and CBI, John Cridland.

“Politicians are misreading the level of public concern about this issue,” said David Orr, chief executive of the National Housing Federation which represents social landlords and helped organised the rally. “We are being offered palliatives instead of understanding the depth of this problem. Our failure to come up with a proper housing policy is now having a clear impact on our potential for economic growth and we can’t allow that to happen any longer.”

Sir Michael Lyons, the former BBC chairman who carried out a review on housing for Labour, last year said the nation needs at least 243,000 homes a year to keep up with the number of new households being formed, but over the last decade only an average of 137,000 homes a year have been built.

The rally organisers – who also include the Home Builders Federation, which represents housebuilders, and the Residential Landlords Association – are calling for the next government to draw up a plan to end the housing crisis within a generation in the first year in office after the 7 May poll.

This overview on the issue is from the BBC, from February: 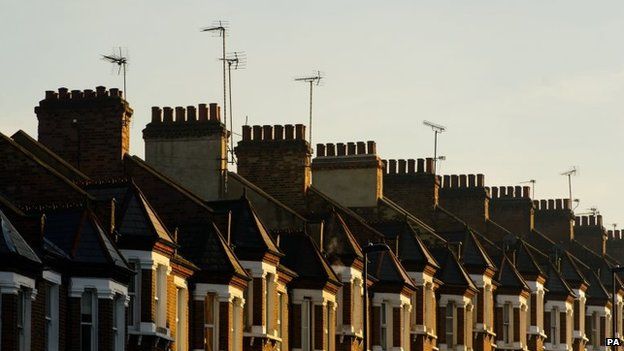 Conservatives: First-time buyers in England under the age of 40 would be able to buy a house at 20% below the market rate, with 100,000 starter homes to be built for them.

Labour: Build 200,000 houses a year by 2020, including new towns and garden cities. Cap rent increases in the private sector and scrap letting fees to estate agents to give a "fairer deal" to tenants. Greater powers for councils to reduce the number of empty homes.

Lib Dems: Build 300,000 houses a year, with up to five new garden cities in Cambridgeshire, Bedfordshire, Buckinghamshire and Oxfordshire.

SNP: Oppose the so-called "bedroom tax". Provide support from the Scottish government to contribute to the building of new homes.

Greens: Abolish right to buy. Give councils the power to borrow money to build houses or buy them on the open market. Introduce a rent cap to prevent exploitation by private landlords. Set up a living rent commission, to work out how to bring rents back in line with incomes. Home owners unable to meet mortgage payments or under threat of repossession would get right to transfer ownership to the council, at less than market value, and pay rent as council tenants. Build 500,000 social rented homes by 2020, paid for by scrapping the buy-to-let mortgage interest tax allowance.
Manifesto watch: Where parties stand on key issues - BBC News

This is from the on-line service 'Mortgage Solutions', also from February:

Election 2015: Housing policy from each party - the round up

Housing is high up the agenda for all political parties in the run-up to May’s general election.

Housebuilding targets, private rented sector reforms and property taxes will be some of the key areas of debate in the coming months.

So far each party has made certain pledges about the changes they intend to make to housing policy but official manifestos are yet to be launched.

So what do you need to know about what each political party is proposing?

Stephen Williams, DCLG spokesperson for the Lib Dems, says for people to live fulfilled lives they need a home at a cost they can afford – and this isn’t the case for many at the moment.

To address this issue the Lib Dems plan to increase the rate of housebuilding to 300,000 a year with plans including at least 10 new garden cities.

“To maximise total house building we will work with housing providers to design new models of affordable housing, to sit alongside the traditional social rented sector, including models that offer a path to ownership for lower income working families,” says Williams.

Other proposals include incentivising social landlords to reduce the number of tenants under-occupying their homes, scrapping the bedroom tax and introducing a mansion tax.

Much of Labour’s housing policy concentrates on the private rented sector reform. Pledges include standard three-year tenancies, a cap on rent rises, a national landlord register, and a ban on letting agent fees to tenants.

Emma Reynolds, shadow housing minister, says: “I want to see a more professional sector that is growing and attracting more institutional investment but I also want to see tenants get a better deal.”

Other pledges include a 200,000 annual total housebuilding target including garden cities and garden suburbs, and to double the number of first-time buyers by 2025.

Like the Lib Dems, Labour is also keen on a form of mansion tax and also plans to double council tax for properties empty for more than a year.

Unlike the other parties, which are unsure about the future of Help To Buy, the Tories have pledged to extend the equity loan part of the scheme until 2020. It also plans to offer a new 20% discount scheme for first-time buyers under the age of 40.

“At the same time, we’re boosting housing supply through a range of schemes, such as the first garden city and town for nearly 100 years that will create 28,000 new family homes,” says housing minister Brandon Lewis.

For tenants, the Conservatives have pledged to complete delivery of 10,000 new rented homes at below market rent.

UKIP is the only party which has pledged to reform the leasehold sector, especially the lease extension process.

“Additionally, we would limit freeholders’ rights of forfeiture whilst empowering long-term leaseholders in blocks of twenty units or more to convert their tenure to commonhold by simple majority,” says Andrew Charalambous, UKIP’s housing spokesperson.

UKIP has also pledged to meet a 200,000 annual total housebuilding target and to build 1 million homes on brownfield sites by 2025.

For renters, it wants more landlords to rent to tenants on benefits and to offer longer (three -10 year) tenancies. Properties left empty for five or more years would pay double council tax.

The Green Party’s aim is house price stability and it plans to make speculation less attractive with new council tax bands and eventually a land tax. Policies such as Help To Buy and Right To Buy would be scrapped while tenants would be given security.

“The Green Party will return housing policy to its original purpose – providing a secure, comfortable and affordable place to live, rather than a site of speculation and economic instability,” says Tom Chance, housing spokesperson.

Homeowners struggling with their mortgage would be able to sell their home to the council and rent it back under a new “right to rent” policy, while social tenants would see the bedroom tax scrapped.