Fishing, Devon and the General Election

They also produced a report on fishing that month:

For too long, overfishing has cost Europe millions in lost landings, profits and jobs. Quotas and subsidies have been allocated to fleets regardless of their economic, social or environmental performance. The reformed Common Fisheries Policy, in force since 2014, is an opportunity for change. But change will not happen without action from member states.

Letting fish stocks grow to the point where they are most productive in perpetuity – their ‘maximum sustainable yield’ (MSY) – demands a reduction of fishing pressure for a set period of time. Reallocating quotas mean less fish for fleets that have traditionally received more access to the resource. While society would largely benefit, trade-offs must be made. European ministers must not shy away from making tough decisions that safeguard our fish stocks.

To date, attention has mostly focused on the short-term costs of transitioning to MSY. The long-term benefits of reaching MSY and the potential economic impacts of reallocating quotas have largely been ignored.

Our research shows that sustainable fisheries management and the reallocation of quotas – according to four alternative criteria (‘job creation’, ‘fuel use’, ‘profit’ and ‘effort’) – would increase revenues and create jobs more effectively than the current allocation based on historic share.

Reallocating fishing quotas to lower-carbon fleets would deliver an additional 14,584 jobs and save 624,000 tonnes of carbon per year, but profitability and wages would fall. Increasing quota to fleets that support more jobs per tonne of fish landed would create 102,000 jobs, but increase carbon emissions.

It is not realistic to fully allocate quotas according to a single criterion, but it is possible allocate shares of the quota. The current quota system is highly concentrated, so small allocations of 5% to 10% could bring huge economic benefits.

This new data was produced using the Bio-Economic Model of European fleets (BEMEF), which NEF has developed over the past two years with help from academics and institutions across the EU. BEMEF is the first model to estimate the economic impacts of reallocating fish quotas across fleets under alternative allocation criteria.

BEMEF also looks at how rebuilding fish stocks beyond MSY would affect landings, revenues, employment, profitability, wages and carbon emissions. We found that keeping our fish stocks below MSY in the last five years caused a total loss of 8.6 million tonnes of catch and €7.1 billion in revenues. Rebuilding most commercial EU fish stocks in North Atlantic waters to their MSY would deliver:

All these benefits would accrue directly to the EU. The results are conservative because our analysis does not incorporate other fishing areas (i.e. Mediterranean) or non-commercial species.

As in all economic impact studies, these results depend on the assumptions underlying the model and the outcomes that we want to prioritise. For example, while it is possible to simultaneously deliver more profits, more jobs and higher wages at MSY, further jobs could come at the expense of wages and profits and vice-versa.

By making the data, results and assumptions accessible, we hope those involved in EU fisheries management – from fishers to ministers – can have a more honest conversation about the impacts and trade-offs involved in rebuilding fish stocks beyond MSY and reallocating quota.

EU member states can secure these benefits simply by implementing the reformed Common Fisheries Policy (CFP)1 which came into force in January 2014. The CFP requires fishing limits for all stocks to be sustainable by 2015 where possible and by 2020 at the latest (Art 2.2). It also requires member states to take social and environmental criteria into account when allocating fishing opportunities such as quota (Art 17).

Member states must do more to translate this potential into reality. The state of some fish stocks has improved. However, in December 2014 EU fisheries ministers set limits for 2015 above scientific recommendations for 63% of stocks. Few member states, if any, are looking seriously at alternative quota allocation.

To secure the best economic, social and environmental outcomes for their citizens, member states must focus their attention on:
ensuring fishing opportunities and ‘total allowable catches’ do not exceed scientific advice
reviewing how they allocate quotas across the fleet, and implementing pilot schemes to test new allocation criteria

Even though it is still at an early stage, BEMEF can help our policymakers do this.


UKIP got a good piece of publicity earlier today:

6 hours ago
From the section Election 2015 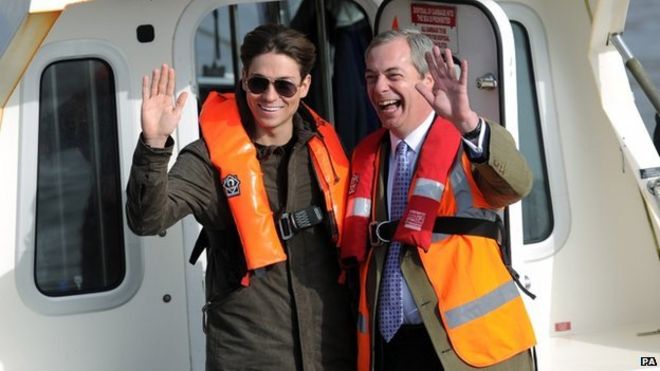 Joey Essex revealed an interest in fishing: "My family are all in Billingsgate fish market - I used to work down there for a year," he said

UKIP has proposed a UK-controlled fishing zone to replace involvement in the EU Common Fisheries Policy.

Leader Nigel Farage told an audience in Grimsby that a system similar to that operating in Norway could revitalise Britain's fishing industry. "When Britain leaves the European Union, Grimsby will once again be a great fishing port," Mr Farage said.

The Conservatives accused UKIP of failing to support UK fisherman in the European Parliament.

Mr Farage told the audience at the Lincolnshire town that such a zone in Norway meant: "All the fish that swim and spawn in those areas are the possession of the Norwegian nation. Norway has a thriving fishing industry. The fishing industry there employs tens of thousands of men and women. What we have done, as a result of membership of the Common Fisheries Policy, we are now allowed to catch less than 20% of the fish that swim in British waters. The other 80% we have given away to the rest of Europe."

That was why Grimsby has been reduced to 15 fishing boats, he said. 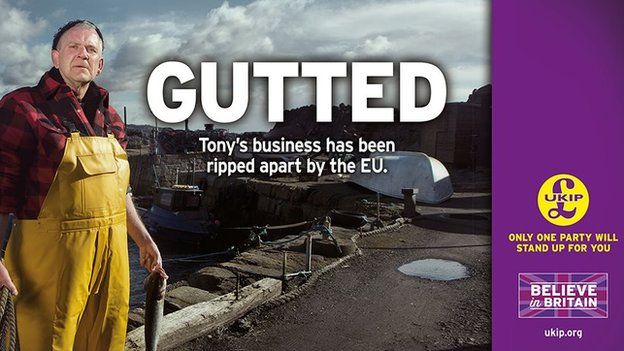 Grimsby remains an important fish-processing centre, with seafood producer and distributor Young's based there.

The Common Fisheries Policy was introduced in the 1970s and has been altered several times; the most recent of which took effect on 1 January 2014. It aims to give all European fishing fleets equal access to EU waters and fishing grounds, while setting catch limits to maintain stocks.

A Conservative party spokesman said UKIP had broken its promises when it came to supporting the UK's fishing industry. "Nigel Farage had an opportunity to influence legislation as a member of the European Parliament's Fisheries Committee for three years - but he attended just one of 42 meetings," he said.

Mr Farage met Joey Essex at Grimsby docks, where the TV star was filming the latest episode of his documentary on politics. "Over half the young people in Britain don't vote at all," Mr Farage said. "If some of the icons of youth like Joey here can actually look at this, spend a bit of time, understand this, and inform an opinion, perhaps you'll get more young people voting."

Candidates (PPCs) for North Devon in the UK 2015 General Election


HUSTINGS ROUND UP: North Devon election candidates answer your questions

On the future of North Devon’s fishing industry

PHJ: The way quotas and limits have been enforced has left many fishermen struggling for survival. The EU rules are not helpful.

NH: I really do believe that there would be interest in other EU countries in fundamental changes, so we should attempt to negotiate a much looser framework of regionalised fishing policies, less easy to abuse.

MC: What is needed is a fundamental rebalancing of the way quotas are allocated. The government is not giving a fair share of quota to local fishermen who look after the sea.

RK: The Green Party proposes to bring fishing policy back into the domain of the government. MCZs need to be extended and increased.

SC: The problem is that EU quotas and UK government mismanagement are doing the exact opposite of what they are claimed to be trying to achieve. The reason given is that they want to protect fish stocks, but it’s our own fishermen who know how to do that. They are being forced off the water by minuscule quotas, while the big factory fleets stand offshore and hoover up the stocks.

GS: Very few fishermen like the EU and that is understandable.