There are many events being held to remember that important date:
Events | Magna Carta Trust 800th Anniversary | Celebrating 800 years of democracy

One of which will be this week at Kennaway House: 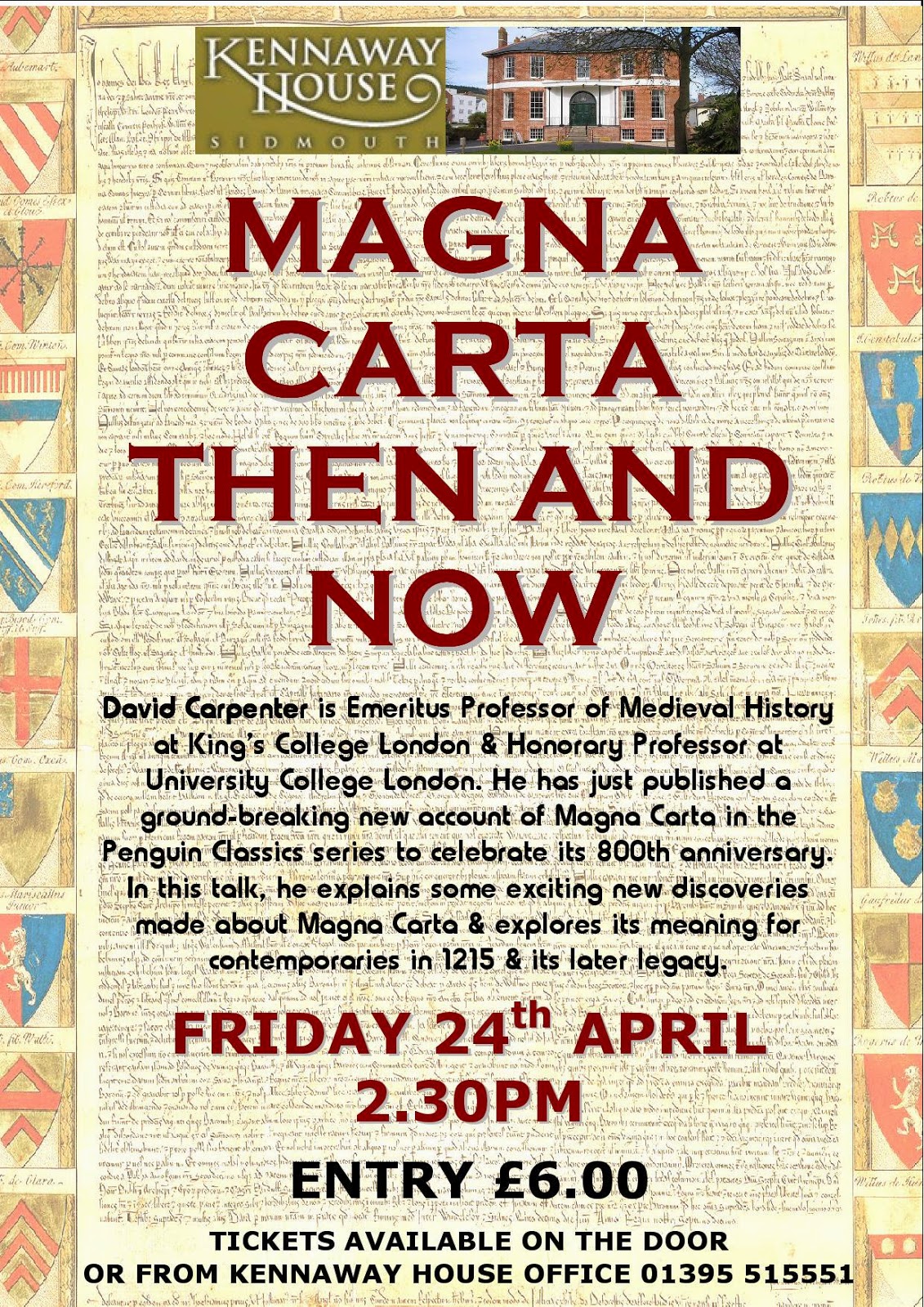 Most see the signing as a 'good thing':
Magna Carta anniversary: Five ways to celebrate - UK - Travel - The Independent WHEN John came to the throne he lost his temper and flung himself on the floor, foaming at the mouth and biting the rushes. He was thus a Bad King. Indeed, he had begun badly as a Bad Prince, having attempted to answer the Irish Question* by pulling the beards of the aged Irish chiefs, which was a Bad Thing and the wrong answer.
*N.B. - The Irish Question at this time consisted of:
(1) Some Norman Barons, who lived in a Pail (near Dublin),


(2) The natives and Irish Chieftains, who were beyond the Pail, living in bogs, beards, etc.

John finally demonstrated his utter incompetence by losing the Crown and all his clothes in the wash and then dying of a surfeit of peaches and no cider; thus his awful reign came to an end.

In an article last  year, the Telegraph was a little more circumspect:

To celebrate its up-coming 800th anniversary, a copy of Magna Carta will be displayed at St Albans Cathedral. Harry Mount reads the small print

By Harry Mount
8:00AM BST 03 Aug 2013
You can forgive David Cameron for failing to define Magna Carta on the Late Show with David Letterman last year.
The Latin translation of the words – “Great Charter” – is the easy bit. The trickier thing is to work out what the 1215 document really signified.
Was it a rallying cry for justice, freedom and the rule of law, echoing down the ages, across the globe? Or was it just the squealing of the grandest toffs in the land, incensed at a king who was bleeding their coffers dry?
The answer is, a bit of both. As the 800th anniversary of Magna Carta approaches, you can decide for yourself, as the four original copies are exposed as never before.
Two are in the British Library, the third is at Salisbury Cathedral. Today , the fourth – Lincoln Cathedral’s original – will go on show in St Albans Cathedral, where the barons first met King John’s representative, probably on August 4 1213 – 800 years ago tomorrow. It will then go to Bury St Edmunds, and on to the Law Library of Congress in Washington.

This is from the Nation magazine:

Magna Carta Messed Up the World, Here’s How to Fix It

The “logic” of capitalist development has left a nightmare of environmental destruction in its wake.
Noam Chomsky
March 23, 2015   |    This article appeared in the April 6, 2015 edition of The Nation.

As we now understand all too well, it is what is privately owned, not what is held in common, that faces destruction by avarice, bringing the rest of us down with it. Hardly a day passes without more confirmation of this fact. As hundreds of thousands of people marched in the streets of Manhattan on September 21 to warn of the dire threat of the ongoing ecological destruction of the commons, The New York Times reported that “global emissions of greenhouse gases jumped 2.3 percent in 2013 to record levels,” while in the United States, emissions rose 2.9 percent, reversing a recent decline. August 2014 was reported to be the hottest on record, and JAMA: The Journal of the American Medical Association predicted that the number of 90-degree-plus days in New York could triple in three decades, with much more severe effects in warmer climates.
It is well understood that most of the world’s fossil-fuel reserves must remain in the ground if an environmental disaster for humankind is to be averted, but under the logic of state-supported capitalist institutions, the private owners of those reserves are racing to exploit them to the fullest. Chevron abandoned a small renewable-energy program because its profits are far greater from fossil fuels. And as Bloomberg Businessweek reports, ExxonMobil announced “that its laserlike focus on fossil fuels is a sound strategy, regardless of climate change.” This is all in accord with the capitalist doctrine of “rationality.”
A small part of the remaining commons is federal land. Despite the complaints of the energy lobbies, the amount of crude oil produced from onshore federal lands in 2013 was the highest in over a decade, according to the Interior Department, and it has expanded steadily under the Obama administration. The business pages of newspapers like The New York Times and The Washington Post are exultant about “the boom in American energy production,” which shows “no signs of slowing down, keeping the market flush with crude and gasoline prices low.” Predictions are that the United States will “add a million more barrels of oil in daily production over the next year,” while also “expanding its exports of refined products like gasoline and diesel.” One dark cloud is perceived, however: maximizing production “might have a catastrophic effect” in “the creation of a major glut.” And with climate-change denier James Inhofe now chairing the Senate Committee on Environment and Public Works, and others like him in positions of power, we can expect even more wonderful news for our grandchildren.
Despite these long odds, the participants in the People’s Climate March are not alone. There is no slight irony in the fact that their major allies throughout the world are the surviving indigenous communities that have upheld their own versions of the Charter of the Forest. In Canada, the Gitxaala First Nation is filing a lawsuit opposing a tar-sands pipeline passing through its territory, relying on recent high-court rulings on indigenous rights. In Ecuador, the large indigenous community played an essential part in the government’s offer to keep some of its oil in the ground, where it should be, if the rich countries would compensate Ecuador for a fraction of the lost profits. (The offer was refused.) The one country governed by an indigenous majority, Bolivia, held a World People’s Conference in 2010, with 35,000 participants from 140 countries. It produced a People’s Agreement calling for sharp reductions in emissions, as well as a Universal Declaration on the Rights of Mother Earth. These are key demands of indigenous communities all over the world.
So, as we commemorate the two charters after 800 years, all of this gives us ample reason for serious reflection—and for determined action.
Noam Chomsky