It was widely predicted that the UK's fishing community would vote to leave the EU:
Scotland's fishermen look forward to EU referendum - BBC News
Pro-Brexit UK fishermen look to non-EU Norway for inspiration

Including in Devon:
Brexit campaign sends flotilla along the River Thames | Daily Mail Online
Brexit Britain: ‘Foreign boats catch fish in our waters and then ship it back to us’ | Politics | The Guardian
Brixham fishermen support Brexit, says minister | Torquay Herald Express
North Devon fishermen call for the UK to cast off from the EU - News - North Devon Gazette

Immediately after the referendum, the Devon Maritime Forum met - and considered the future of the county's fishing industry:
Futures Forum: Brexit: and "the future of our marine environment and coastal communities" >>> the reports and the news

The FT today looked at how the UK fishing industry is hopeful of a 'better deal' following Brexit: 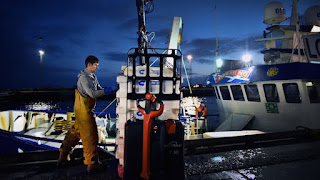 The EU common fisheries policy, which sets quotas and is designed to conserve fish stocks and manage fleets across Europe, has long been one of the most contentious issues in the bloc. Critics say it is run by bureaucrats who often do not understand fishing while trawlers end up having to dump large amounts of their catch. Mr Buchan blames it for damaging Scotland’s coastal communities.
“There is a need for a system,” he concedes, “and more importantly we need to ensure there is enough [fish] left. The problem is how, over the years, the EU has introduced policies that far away, sitting at a desk, look like a sensible policy. When you try and transfer that to working in an industry, that is a whole different aspect.”

Although the Bremain former Minister for Fisheries put out this statement before the referendum:

£360 million of UK seafood making a splash on European menus
From: Department for Environment, Food & Rural Affairs and The Rt Hon Elizabeth Truss MP First published:27 April 2016
85% of all UK shellfish exports headed for European shores in 2015, generating millions for the UK economy.

In fact, the fishing industry has been divided on the issue:
NFFO - The National Federation of Fishermen's Organisations

And post-referendum, fears are being expressed very clearly:

UK fishermen warned catch quotas may not increase with Brexit
'Promises have been made and expectations raised during the referendum campaign,' says National Federation of Fishermen’s Organisations
Thursday 30 June 2016 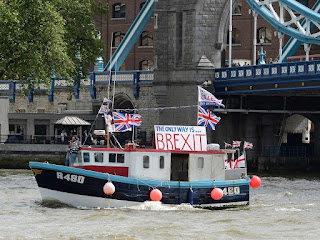 The National Federation of Fishermen’s Organisation (NFFO) said in a statement: "Promises have been made and expectations raised during the referendum campaign and it is now time to examine if and how they can be delivered. Unfortunately, perhaps, the UK’s geopolitical position means that it is not politically or legally possible just to ringfence most of our fish resources, in the way that, for example, Iceland can."
The NFFO added: "The reality is that most of our stocks are shared with other countries to some degree or other. We can certainly seek to renegotiate quota shares, as well as access arrangements, but it is realistic to expect that there will be a price. Who will pay that price is a critical question."

And the former EU Fisheries Commissioner would agree: 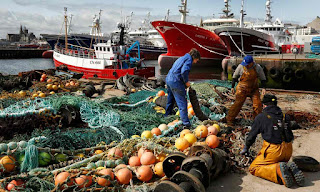 Maria Damanaki, the former commissioner for fisheries, who oversaw the most sweeping reforms of the EU’s common fisheries policy in decades, said: “The idea that you can control fisheries at a national level is an illusion for any country, but especially the UK - with Brexit or without. International cooperation is needed to keep stocks and control.”
Damanaki pointed to the UK’s geography, with most of its fishing grounds shared with or bordering upon those of other nations. “How would you control the waters between Ireland and the UK?. How would you control the other international waters [such as the North Sea and the English channel]? This does not make sense,” she said, in response to claims that post-Brexit Britain could set its own catches without input from the EU and other European countries.
A further problem comes with fish imports, on which the UK relies for much of the fish sold in shops, which would be subject to new international trade agreements, she said.