Brexit: and the future of rural services in the South-West

But the doubts seem to be setting in - as reported today by the Independent:

Harriet Sinclair 7 hours ago
459 comments
Many British farmers are experiencing ‘Regrexit’ over fears they may lose agricultural subsidies, the Earl of Sandwich has told Parliament.

Speaking in a House of Lords debate, John Montagu said many farmers had voted “without understanding the consequences” and were now in dismay over news they may not receive the same level of payouts made under the EU's Common Agricultural Policy.

“In 2013, farmers received €2.6bn (about £2.2bn) under pillar 1 [an EU funding term] and €637m (£538m) for agri-environment and rural development under 'green' pillar 2," he said. “How will [the Government] ensure that British farmers continue to receive these payments? We have already heard that they may not. There are fears that direct payments will be significantly less under the new Government because of the continuing need for austerity.”

He said the majority of people in his home of west Dorset, particularly in the agricultural community, had voted to leave and were now worried about how Brexit would work, and the financial impact it would have on UK farms. 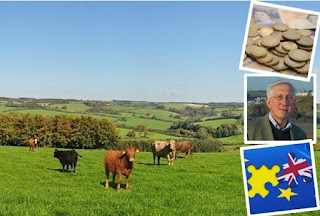 The region's farmers and business leaders are demanding urgent action from the Government to release EU funding withheld since last month's Brexit vote.

Members of the Country Land and Business Association (CLA) have written to the chancellor to call for an end to the "limbo", which they warn is hindering economic development in the South West. They claim the delay is hitting farmers and putting environmental projects at risk, and could undermine confidence in the rural economy unless the Government acts soon.

"If this commitment is not made soon it will have damaging long term implications," said CLA South West director, John Mortimer. "Businesses [will] stop making crucial investments or make more difficult decisions about the future sustainability of their business. The whole process [of EU payments] had been put into limbo during the referendum – and has failed to emerge. The suspension has affected economic development projects... new contracts to farmers for important environmental schemes [and] a raft of ongoing projects."

The South West benefits from million of pounds-worth of European Union funding each year, through the Common Agricultural Policy, Regional Development Fund and Social Fund. The money is channelled into a range of industries – such as agriculture – as well as business growth programmes and infrastructure projects.

However, according to campaigners and MPs, the distribution of this funding from central government has been frozen since the vote to leave the EU on June 23.

St Austell and Newquay MP, Steve Double, has already met with Government officials to discuss releasing funds for Cornwall. He said there were projects which were ready to be signed off "but when it came to the point of committing funds, there is a delay at the moment". The Treasury didn't feel they could commit to any more spending," he said. "[But] we're hopeful that will get cleared very quickly now, so we can get these projects signed off."

However, the CLA has grown impatient with the delay, and president Ross Murray has written to the Chancellor for an "urgent" commitment.

The letter states there "is no justification" for holding up money "that is budgeted for", while calling for assurances over long-term support for the agricultural sector. "Every day the freeze continues it threatens to do serious long term damage to the rural economy and to the delivery of vital environmental outcomes across the countryside," the letter states. "The Government needs to confirm that all spending commitments under the current CAP will be honoured, irrespective of the date the UK leaves the EU."

A Treasury spokesman said that as the UK remains a member of the EU there will be "no immediate change to EU programmes". "The Treasury has not stopped any payments but we recognise the need to bring any uncertainty to an end as soon as possible," he said. "We continue to work urgently to understand the future implications for programmes and we will make an announcement soon."

The Rural Services Network has issued a statement over its concerns for rural Britain:

Safeguarding the future of rural services – and those that provide them – would be essential following the decision to leave the EU, said the network. Immediate issues included promoting the case for a period of financial stability following the referendum and no further funding reductions, it added.

The network issued the warning in a Brexit Statement on Friday (15 July).

Network chair Cecilia Motley said: "Local authorities and other service providers have an essential role in supporting local economies. It has never been more important to have a strong network of local authorities, private partners and voluntary organisations providing services to rural people, communities and businesses."

Councillor Motley said the network would continue seeking fairer funding for rural authorities and make the strongest case possible against any proposed funding reductions as a result of Brexit.

There was also an urgent need for clarity over EU structural funds, Common Agricultural Policy payments and the policy and regulatory impact of leaving the EU. The network was keen to ensure that local government had a seat at the negotiating table as the UK prepared for Brexit talks with its EU neighbours.

Councillor Motley said: "Rural local authorities meet most of the growth related expenditure and this will remain critical at a time of economic uncertainty."

As Brexit took place, the network was keen to ensure that any powers and funding returned from Brussels reached England's shire areas rather than residing in Westminster.

Councillor Motley said: "Power needs to flow from Westminster, with a significant reduction in bureaucracy, giving a real say to local people at the most appropriate level of governance."

Brexit meant there was also an opportunity to place county, unitary and district authorities at the forefront of the devolution and public service reform debate. Councillor Motley said: "Changing dynamics in Westminster present an opportunity to put forward alternative models for devolution to rural areas."

Network members had raised concerns over the one-size-fits all approach to elected mayors, she added. "There is now a period for the government to reconsider this approach where our members feel this governance model is not appropriate for their areas."

All of which echoes concerns from immediately after the referendum:
Rural businesses 'united' post-Brexit
Rural councils seek 'urgent' reassurance on Brexit