Most farmers voted for Brexit:
Futures Forum: Brexit/Bremain: "The majority of farmers are keen to leave the Union and all the baggage that comes with it."

There is also the pesticide glyphosphate (aka Roundup), which had a ban extended just before the referendum:
Futures Forum: Lobbying over the Roundup weedkiller >>> again >>> crunchtime: Tuesday 14th June
Futures Forum: Pollinators and Pesticides

It is clear, though, that British farmers' irritation with Brussels over these pesticides was a deciding factor on 23rd June:
UK farmers link Brexit vote and glyphosate – EurActiv.com

Many British farmers are tired of perceived cuts in financing and more mandates from Brussels. 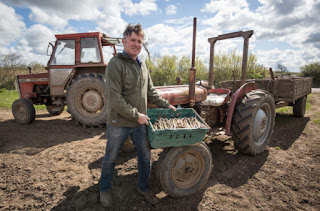 Farmer David Hartnoll collects asparagus that has been picked in a field in Devon, England on April 27, 2016 | Matt Cardy/Getty Images

British farmers are fed up with the meddling from their European neighbors over the best way to grow food — and it’s enough to drive some of them to want to ditch the European Union.

The latest battle is over Brussels’ impending ban on the weedkiller glyphosate, the U.K.’s most widely used pesticide, largely due to political pressure from green groups on the Continent already skeptical of pesticides and certain other new technologies in agriculture. But pulling glyphosate, better known as Roundup, from the market, would be devastating to British farmers who rely on the herbicide to treat weeds.

Many British farmers already are tired of what they say is decreasing financial support but increasing mandates from Brussels on how to run their operations. It’s turned some former supporters of the EU and the access it provides to a market of 500 million customers into poster children of the Leave campaign.

“Distance from government in the end breeds contempt or distrust,” said Michael Seals, a beef and row crop farmer in Derbyshire and spokesman for the pro-Leave group Farmers for Britain. “We feel very, very remote from Brussels.”

This is the view from the Genetic Literacy Project:

How Brexit will impact the future of farming, GMOs and gene editing in Britain and Europe

“Distance from government in the end breeds contempt or distrust,” said Michael Seals, a beef and row crop farmer in Derbyshire and spokesman for the pro-Leave group Farmers for Britain. “We feel very, very remote from Brussels.”

British farmers point to political attempts by EU states to block the renewal of the widely used herbicide glyphosate and a previous EU decision to ban neonicotinoids despite evidence that their use has not contributed to bee hive number declines, as activists have claimed.

UK officials were strongly in favor of reauthorizing glyphosate for 15 years—the European Commission decided on June 27 to back an 18-month reauthorization after a bitter political battle in which anti-GMO countries pushed for a complete ban. Britain was also not one of the roughly half of EU member countries who decided to ban the cultivation of GMOs.

“GM technology, the fact that it’s outlawed in the EU, is a complete anachronism; we need that to go forward,” Seals said. Crop production is about as efficient as it will get without the help of biotechnology, but “there is no limit on what we could achieve if we were given the freedom” to use GM crops, he added.

“It is certainly the case that European legislation … is essentially blocking all biotechnology cultivation in Europe,” said Huw Jones, a geneticist at Rothamsted Research, based in Harpenden, Hertfordshire, who was instrumental in a series of GM wheat trials that sparked high-profile protests.

How Brexit will impact the future of farming, GMOs and gene editing in Britain and Europe | Genetic Literacy Project

The 'agrichemical titans' have a stake in these products:
Bayer’s bid is the latest twist in chemical firms’ warfare - Telegraph
After Monsanto Binge, Bayer Could Dictate What We Eat - WhoWhatWhy

Ironically, however, on 29th June, a week after the EU referendum, the EU decided to allow the continued use of Roundup:
Glyphosate Given Last-Minute Approval Despite Failure to Secure Majority Support - EcoWatch
If You Want to Market a Dangerous Pesticide Without Regulation, Go to the European Union | The Nation

Here is a very handy summary of all the issues from Tom Heap on the latest edition of BBC One's Countryfile: 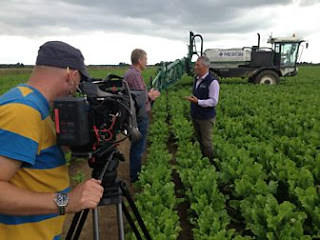 Tom has been investigating the controversy surrounding Glyphosate - the world’s most used weed killer.
It’s used on farm land, and households across the UK - but some claim it’s unsafe and increases the risk of cancer – and now the EU is considering banning it altogether.
But, does it really pose as serious a health risk as is being claimed?
Many of those who are convinced glyphosate is safe say opposition to it is driven by a desire to cripple its leading manufacturer – a company seen by some as the bogeyman of modern farming – Monsanto.
So, is that true, and can we farm without it?