Brexit: and life after the Common Fisheries Policy >>> >>> or: food sovereignty and the commons

The vast majority of fishermen wanted out of the EU:
Futures Forum: Brexit: and fishing

But what are we going to replace the Common Fisheries Policy with?

A book has just come out looking at the issues:

Transforming the Fisheries: Neoliberalism, Nature, and the Commons 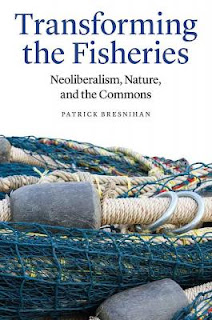 There is now widespread agreement that fish stocks are severely depleted and fishing activity must be limited. For example, the recent reform of the European Common Fisheries Policy (2014) has re-oriented fisheries policy towards the conservation of fish stocks, and this has understandably been celebrated by environmental campaigners, NGOs and members of the wider public.

But the problem with this emphasis on conserving fish stocks is that it can reproduce simplistic narratives about resource depletion and environmental degradation more generally. In this understanding, overfishing is understood to be the result of self-interested fishermen exploiting limited fish stocks. This kind of explanation ignores the uneven development of industrial-scale fishing and the pressures of a globalized seafood market. It also fails to recognize that fishermen are not all the same – they interact with and use the marine environment in different ways.

Transforming the Fisheries, Neoliberalism, Nature & the Commons.
Who is Responsible for Overfishing? : Trinity News and Events

The problem is that fishing grounds are 'common resources' - and the question is how we allocate and manage them - through the state, private enterprise or something else.

Certainly, over-management can be counterproductive:
Ruining the Commons and Responses of the Commoners: Coastal Overfishing and Fishermen's Actions in Kerala State, India | Publications | UNRISD

We can look to Norway for another way to deal with the issues - to a country not bound by the Common Fisheries Policy.

But it has been by no means perfect:

Privatising the Commons in Norway

The end of the 1980s saw a sharp decline in the cod stocks off Northern Norway due to extensive trawling. There were heated debates in the country on responsible fishing and the future structure of the fishing fleet.

In response to the debate, the government proposed to introduce individual transferable quotas (ITQs) in the fishery. Under this system, participants are allocated and own quota shares in the total annual catch of a given fishery. Quota holders can transfer- buy, sell, and lease- shares in the open market.

It was hoped that ITQs would ensure an `optimal allocation of resources’ in the context of the overcapacity of the fishing fleet resulting from the decline in stocks. ITQs were meant to eliminate the need for detailed management of the fishery leaving it to the market and the industry to allocate fishing rights, with certain restrictions to safeguard the smallest boats and to ensure regional distribution. The government held up Iceland and New Zealand to showcase the advantages of ITQs.

The Norwegian fishing industry’s reactions to the concept of ITQs were diverse. The trawl owners argued that the restrictions would inhibit the proper functioning of the system. They argued for fewer restrictions on the transfer of quotas between the fleet groups. Environmentalists and the small-scale fleet reacted in the opposite fashion. "Privatisation of fishing rights will only allocate them to the capital-intensive fleet," said Bente Aasjord, spokesperson for the Norwegian society for the Conservation of Nature.

The coastal population saw fish as a common resource and fishermen as fishing on behalf of the community as a whole, and not as owners of the resource. This fact had always been an important part of Norwegian culture. The pressure on the Labour Party government against ITQs grew and during the election campaign in the fall of 1991, the idea was abandoned.

The experience with ITQs in Iceland indicated that this was a wise step. After the introduction of ITQs, Iceland had seen a drastic rise in its trawler fleet and a drop in fish resources. Also the ITQ system made it more tempting to fish in the high seas where there were no quotas, so that Icelandic fleets were fishing Norwegian Arctic cod beyond Norway’s 200-mile EEZ. Money made from high-seas fishery was used to buy up quotas from a coastal fleet in economic difficulty, developments strongly opposed by the Iceland’s coastal fishers. In Iceland, therefore, ITQs clearly favoured the big, mobile fleet and threatened the small-scale fleet.

The Norwegian government, instead, settled for a system of boat quotas. Depending on its size each boat got a certain quota. In some ways the system remained one of transferable quotas, the only difference being that quotas from several vessels could not be bought and acquired for a single large vessel nor could one person own many vessels.

Some weaknesses of the system soon became apparent. The closure of the commons effectively restricted recruitment into the coastal fleet. This happened because fishing rights were given only to registered vessels and few youngsters could afford to purchase a vessel with fishing rights. Earlier people used to enter fishing by starting out with a small boat, fishing in their spare time. The system also took away from coastal communities the control over the transfer of their own knowledge. To become a fisher, skills needed to be `bought’ from the school system. This added to the difficulties and cost in starting up as a coastal fisher.

The system also threatened coastal communities in another way. In small communities people earlier combined fishing with farming or other work like plumbing. With the restrictions on entering the fishery, many people had to move out to bigger regional centres to make a livelihood. The communities they left behind were forced to pay more for the services of such skills.

Privatising the Commons in Norway

It's been very controversial: 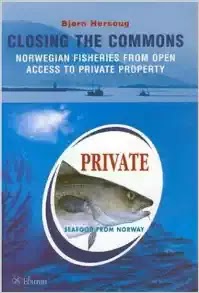 Closing the Commons traces the development of limited fishery access from the 1930s—when a licensing system was first established for trawlers operating in Norwegian waters—through the closing of offshore fleets in the 1970s and the coastal fleet in the 1990s.

Today, more than ninety percent of all Norwegian fisheries have been closed through various license systems and mandates.

There might be something in between - the management of 'common resources' by the users themselves:
The blessing of the commons : small-scale fisheries, community property rights, and coastal natural assets

The notion of 'sovereignty' also loomed large in the debate over the EU:

Food Sovereignty and the Commons

Until recently, the local food movements have approached seafood with trepidation. Rather than applying the same principles of land-based food, many consumers look for easy answers. Green for eat; yellow for caution; and, red for stay away. Unfortunately, those directives take one fish species at a time, rather than looking at entire ecosystems – both marine environments and human communities. Community supported fisheries and fishermen selling at farmers markets are on an increase. Consumers are learning how to fillet, what to do with a whole fish and how to identify a fresh one. When consumers connect to the people who catch their fish and who care about the ocean health, they become advocates for the community-based fishermen and the marine ecosystem.

It is essential that these links be made and that the food and commons movements understand that fish and the waters where they live are a public resource. They are a global commons. Unfortunately, for the past 30 years a fisheries management regime, called catch shares or individual fishing quotas (IFQs) or individual transferable quotas (ITQs), has been gaining popularity amongst governments and corporations. IFQs remove fish as a common resource and privatize the right to fish by allowing fish quotas to be bought and sold as a commodity. Proponents of IFQs are looking to sell and trade future fish populations on the stock market. A common resource is being sold to the highest bidders.

The pressure that puts on the fish populations, the environments and the communities is unfathomable. The IFQ system began in New Zealand in the 1970’s. By the 1990’s, most of their fisheries were under an IFQ system. When the red snapper populations began plummeting, the New Zealand government had to reduce the total number of fish caught. The industry responded with a series of legal actions, claiming the fish are private property

To me, this is one of the greatest assaults against the commons. Fish are a public resource. Water is a commons. No one should be given the exclusive rights to a natural ecosystem that spans state, country and continental boundaries.

Food Sovereignty and the Commons

However, the 'Norwegian option' might not be quite so attractive with regards to 'sovereignty' - whether over fish or anything else:

Can the UK join Norway in the EEA?

This week pro-European MPs signalled that they might try to force the UK to accept membership of the European Economic Area – the ‘Norway option’ – if Britain votes to leave the EU. Charles Grant and John Springford debate whether this is likely.

If the British people vote to leave, they will do so mainly because they want fewer immigrants from EU countries coming into the country. They also object to the loss of sovereignty that membership of the union entails, and to Britain’s payments into the EU budget. Yet if the Leave campaign wins on June 23, the British may have to accept free movement of labour with the rest of the EU, comparable budget payments and even less sovereignty than they enjoy today. This is because Parliament could impose the ‘Norwegian option’ on a post-Brexit government.

Norway, like Iceland and Liechtenstein, is part of the European Economic Area (EEA). These countries don’t take part in the EU farm or fishing policies but they are in the single market. When the EU makes rules for the single market, these three are consulted. But they have no vote since they lack representatives in the Commission, Council of Ministers or European Parliament. Norway has to accept free movement of labour (it hosts almost three times as many migrants as the UK, per capita) and pay into the EU budget (about 90 per cent of what the UK pays, per capita). And Norway cannot – as Britain now can – veto a country that wishes to join the EU, though it must let in the workers of every new member.

Britain is not Norway. It would not obediently sidle to the wings of the European stage.

Can the UK join Norway in the EEA? | Policy Review

Maybe we need to look at totally different models:
Common-pool resource - Wikipedia, the free encyclopedia
Elinor Ostrom's 8 Principles for Managing A Commmons | On the Commons
Center for a Stateless Society » Governing the Commons by Elinor Ostrom