Brexit: and cheap labour for the hospitality and care industries

The hottest issue around Brexit is migration:
Futures Forum: Brexit: and the day the immigrants left

But why can't 'local' people work in these jobs?

Basically, they can't afford to live in Sidmouth:

Otherwise, 'locals' have to commute in from less expensive parts of the District, although it's not exactly easy:

When I was out of work I managed to get a job in a hotel in Sidmouth but had to cycle to/from work on a Sunday. This was OK in the summer but had to give up the job in the winter – too dangerous on the road.
DCC need to seriously consider the impact on low income workers whose only way of getting to/fro work is a bus. Stagecoach also need to reduce their prices – over £6.00 to travel four bus stops from centre of Budleigh to the industrial estate on the edge of Exmouth/Dinan Way. Another barrier for low income workers. Also note the family whose husband works 6 days per week, hasn’t got a car, and the family with two children in pushchairs take the bus to Exmouth on a Sunday to Lidl/Tescos to do their weekly shop. How are they going to do this on a Sunday?
Impact assessment | Public transport review

Fundamentally, though, wages in the hospitality and care industries are too low compared with the cost of living:
Surge in low-paid jobs is behind falling wages, says TUC | This is Money | Daily Mail
Ten per cent of care workers on less than minimum wage - Financial Times

Meanwhile, there is the perceived pressure on local services from such workers:

Library and Internet Services
Pressure on library computer services has posed a challenge for some Local Authorities. The Devon Scoping Report found evidence of pressure on availability, particularly in the summer. The pressure was particularly acute in coastal holiday resorts, such as Sidmouth and Exmouth, and in the larger libraries, such as Exeter Central and Barnstaple. Exeter Library has reported day long queues, sometimes of 18 or more and the “indigenous” community are often resentful that this may limit their access.
Many of them do not realise migrants pay income and council tax and feel that migrants should not receive free access. There may be a need for increased provision and for a programme of “myth busting”.
Migrant Workers: Scoping the Issues for Devon, April 2007,(Community Council Devon)

One solution is limit the amount of cheap labour on the market:
Amber Rudd vows to stop migrants 'taking jobs British people could do' and force companies to reveal number of foreigners they employ - Telegraph

Another solution would be to either increase wages in the hospitality and care industries:
Minimum Wage to rise in 2016: Hospitality industry responds

Or to ask whether Sidmouth should continue in such low-wage industries as tourism - and whether this really is a money-spinner - and for whom:
Calculation of economic benefits of the Sidmouth International Festival

Which means we need to tackle the issue of NEETs - that is, those Not in Employment, Education or Training:
Futures Forum: Brexit: and Neets

The Telegraph looks at these issues in its editorial: 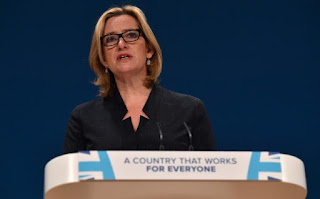 The suggestion that British companies will be "named and shamed" for employing too many foreign workers brought opprobrium down on the head of Amber Rudd, the new Home Secretary, last week.

Miss Rudd had some cause to feel aggrieved, as she did not actually say this in her speech to the Conservative Party conference in Birmingham. Rather, it was the impression given by later briefings, and the Home Office hardly went out of its way to discourage speculation that some sort of "foreigners list" was in the pipeline.

That mistake is now being rectified. The idea of forcing businesses to identify publicly how many overseas employees they have on their books is anathema to the British sense of tolerant fair play and runs counter to the outward-looking attitude that needs to be projected post-Brexit. Anything that smacks of insularity would be deeply damaging to the country's reputation.

However, leaving this particular controversy aside, there is a point here that Miss Rudd was perfectly entitled to make without the roof falling in on her head. She was essentially asking a question that many want an answer to: are UK companies setting out to recruit staff from abroad without even considering whether there are British workers capable of filling the jobs? The argument that home-grown employees are either unwilling to take particular jobs or are less "employable" than their EU counterparts has become an excuse for failing to look hard enough or simply ignoring the potential recruits on our own doorstep because labour is cheaper abroad.

To back up Miss Rudd's concerns, there is plenty of anecdotal evidence of companies advertising only in eastern European countries for jobs that British workers never get to apply for. A reluctance to address these issues and a sense that popular concerns are being ignored by politicians and business leaders were reasons why the country voted to leave the EU. Is it really controversial to ask companies if there are British workers capable of doing the jobs before they look abroad? And if there really aren't, the Government needs to ask why not?

Switzerland has meanwhile been grappling with exactly the same issues: 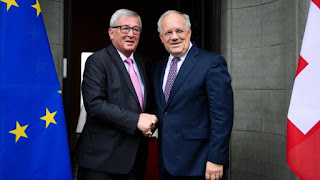 A policy of “locals first for jobs” and work permits could unlock a Brexit deal on free movement and access to the single market after the European Union hailed “constructive” talks with Switzerland yesterday.

Switzerland, which is not an EU member, is seeking to keep access to the single market while restricting the number of European migrant workers after the country’s referendum vote against free movement in 2014.
Talks have been complicated by the Brexit vote and Switzerland has been forced to retreat on demands for a cap on the number of migrants once a threshold or level of influx…
Swiss talks raise hopes of deal on single market | News | The Times & The Sunday Times

Although, as always, it depends how you see it: