Going on a "bioblitz" to record what wildlife remains >>> “It’s catastrophic and that’s what we’ve forgotten – our generation is presiding over an ecological apocalypse and we’ve somehow or other normalised it.”

Springwatch has been a real force for "citizens' science":
Futures Forum: We need more dedicated expert and amateur naturalists to observe and record the distinctive flash of a firefly or the soft clatter of dragonfly wings

Because we need to get out there and make a difference: 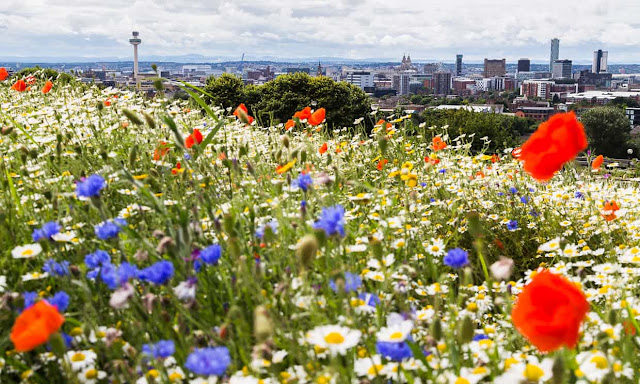 As the presenter of Springwatch tells us:

He’s currently enjoying a great bounty of nature, from tree-climbing slugs to blackbird-gobbling little owls on this year’s Springwatch, but Chris Packham warns that we are presiding over “an ecological apocalypse” and Britain is increasingly “a green and unpleasant land”.
The naturalist and broadcaster is urging people to join him next month on a 10-day “bioblitz”, visiting road verges, farmland, parks, allotments and community nature reserves across the country to record what wildlife remains – from butterflies to bryophytes, linnets to lichens.
According to Packham, British people have normalised a “national catastrophe” and only see a wealth of wildlife in nature reserves, with the wider countryside bereft of life.
“Nature reserves are becoming natural art installations,” he said. “It’s just like looking at your favourite Constable or Rothko. We go there, muse over it, and feel good because we’ve seen a bittern or some avocets or orchids. But on the journey home there’s nothing – only wood pigeons and non-native pheasants and dead badgers on the side of the road.
“It’s catastrophic and that’s what we’ve forgotten – our generation is presiding over an ecological apocalypse and we’ve somehow or other normalised it.”
Packham said he looked at the rolling hills beyond this year’s setting for Springwatch on the National Trust’s Sherborne estate in the Cotswolds and despaired. “How many wildflowers can we see? None. Where’s the pink of ragged robin? Where’s the yellow of flag iris? The other colours are not there. It’s not green and pleasant – it’s green and unpleasant.”
Packham’s recent tweets have gone viral after he commented on the absence of insects during a weekend at his home in the middle of the New Forest national park. He did not see a single butterfly in his garden and said he sleeps with his windows open but rarely finds craneflies or moths in his room in the morning whereas they were commonplace when he was a boy.
Since Packham first became passionate about birds, in 1970, Britain has lost 90 million wild birds, with turtle doves (down 95% since 1990) hurtling towards extinction. The State of Nature 2016 report (pdf) described Britain as being “among the most nature-depleted countries in the world”, with scientific data from more than 50 conservation and research organisations revealing that 40% of all species are in moderate or steep decline. Germany was revealed to have lost 76% of all flying insects since 1989. Packham said decades of losses were finally visible.
Birdwatchers have noticed the skies are particularly lacking swifts this year, a summer migrant that is declining at an increasing rate – 51% over 20 years but 25% in the five years to 2015. Swifts are usually seen in 38% of the bird sightings logged with the British Trust for Ornithology in early June. This year they account for just 31%.
Next week, Britain will become the first country in the world to dedicate a national week to helping swifts and Packham said Britain was home to more amateur naturalists than any other. The naturalist hopes his bioblitz will showcase their expertise as well as inspiring newcomers to nature – and farmers. “There are a lot of good farmers out there and we are going to celebrate their work as well,” he said.
Strict BBC rules on impartiality mean Packham does not make “political” statements during live broadcasts such as Springwatch, which continues until the end of next week, but he vowed he would campaign against the forces that are destroying nature as soon as he could and criticised conservation charities for not doing more to stop pesticides and bird persecution.
He added: “We need a peaceful public uprising. We need people to say we’ve had enough. We do that every time there’s a terror attack. We need a similar movement for nature. We need people to stand up and say we want action now. We have the ability to fix our countryside.”

Chris Packham warns of 'ecological apocalypse' in Britain | Environment | The Guardian
.
.
.
Posted by Jeremy Woodward at 02:54