We've considered how the management of plastic waste is largely a matter of 'greenwashing':
Futures Forum: Plastic recycling and greenwashing

Of course it's happening everywhere:
The troubling evolution of corporate greenwashing | Guardian Sustainable Business | The Guardian
What Is Greenwashing? - businessnews
When corporations take credit for green deeds their lobbying may tell another story | Opinion | Eco-Business | Asia Pacific

They were very much in evidence at the last UN climate change conference in Poland:


The annual UN climate talks in Katowice, Poland, are drawing to a close. But over the conference’s two weeks, major polluters have been given the platform to promote a climate-friendly image at more than 30 events, new analysis by NGOClimate Tracker reveals.

Negotiators are in the coal mining town of Katowice, Poland, to try and establish a rulebook to guide countries’ implementation of the landmark Paris climate change agreement. Around 22,000 delegates are present at the conference, known as COP24.

Companies have taken advantage of having so many climate specialists in one place to promote their climate-friendly activities, even if their business model remains reliant on polluting practices.

DeSmog UK previously reported how Polish coal company JSW, which is sponsoring COP24, presented its plan for boosting its coking coal prospects on Tuesday - by renaming the fuel.

Big oil companies such as BP, Chevron, Rio Tinto, Eni, Total and Shell, have also been seeking to influence the negotiationsthrough trade associations such as the International Emissions Trading Association (IETA). In particular, the fossil fuel companies have been participating in discussions around a carbon market mechanism, known as Article 6, which allows companies and countries to reduce their emissions by buying credits for emissions reduction that is happening elsewhere.

It is now being suggested that Big Oil got what it wanted at Paris a couple of years before:
Did Shell Help Write the Paris Agreement? At COP24, Oil Companies Are Still Undermining Climate Action - Pacific Standard

Here is a little something from the New Internationalist from the summer - as a preview of Shell's 'Make the Future' campaign:

Shell aren’t an oil company, they make solar panels now, idiot. Haven’t you heard about it on the Instagrams? Me and my millennial mates are going to eat skateboards or whatever it is we do down at Shell’s festival of unbelievable bullshit, ‘Make The Future’. 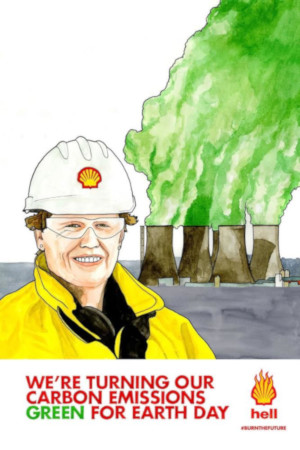 When a corporation’s business model revolves around destroying the possibility of human life on earth, sometimes people think that’s not a good thing and they ask if they could maybe not do that. But there’s something about the billions of dollars a corporation can make from engineering the apocalypse that makes it want to not stop, and makes it want to do it more. So instead of not killing everyone, corporations like Shell turn to advertising to make killing everyone seem actually kind of cool.

Make the Future is the latest in flimsy greenwash PR from an oil company pretending it can save the world from oil companies. The amount of money they’ve thrown at this thing is staggering, multiple star-studded music video adverts, social media campaigns, a four day event in London’s Olympic Park, a full-spectrum media blitz, and to justify it all, the funding of a few puny green-technology gadgets like a footstep-powered hotdog van and a gravity-powered lamp.

The purpose of such underwhelming green technology is not to replace the need for carbon-polluting oil or gas, but to nibble around the edges of the problem so Shell can continue to extract and burn ever increasing amounts of hydrocarbons into an already overheated atmosphere while pretending to be an active part of the solution to global warming. Shell’s propaganda might be paper-thin, but advertising doesn’t need to make sense to be effective. The plan, like most greenwashing marketing campaigns, is simply to clobber millennials over the head with the message that Shell is an ethical, environmentally-conscious company until enough of them start to believe it. Judging by the fawning comments left by some misguided teens on the Shell music video ads, some of it appears to be working.

Luckily most people are not so easily fooled and there’s been a backlash brewing against Shell’s slickly produced lies. In the last few weeks, subvertising group Brandalism started putting up dozens of anti-Shell posters designed by a host of artists, including Bill Posters, Billy Fisher, Phire, Tommy Gooch, Billy Bindley, and myself, in bus stop ad spaces in cities around the country, including outside Shell headquarters in London.

These ‘subverts’ hammer out the absurdity of Shell’s propaganda and weirdly enough Shell isn’t into it. Last week they had Brandalism’s satirical Facebook page about Make the Future taken offline. Then a few days ago their lawyers served me a cease and desist over anti-Shell pin badges and t-shirts I’ve been selling to raise funds in order to make more anti-oil and gas artworks. The prospect of people wearing these to Shell’s ‘Make the Future’ carnival of bad ideas next month must have spooked them. 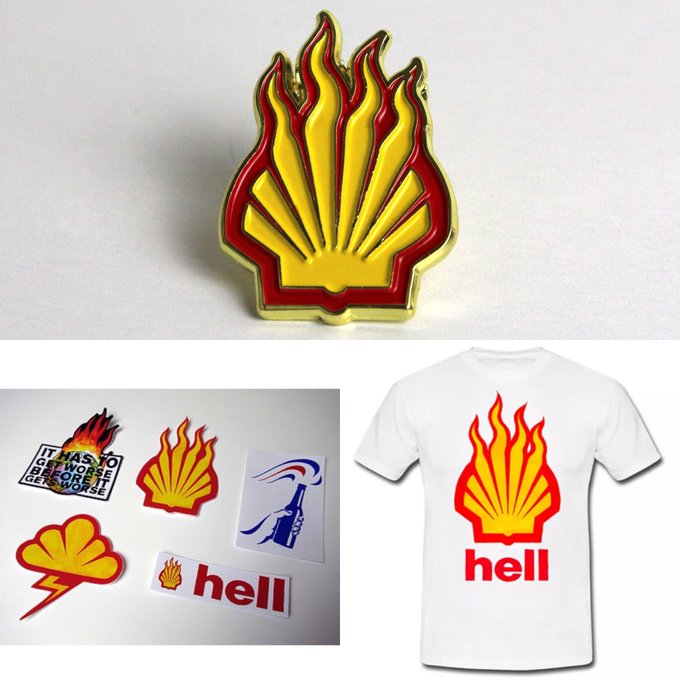 Shell sent me a cease and desist letter saying I have to stop selling these apocalypse-themed products on my website in 7 days. More details and links to buy on my website. All funds go towards utterly pissing Shell off forever.

Not having the resources to fight a legal battle with one of the world’s largest (and most evil) corporations, I have few options but to remove the listings from my website by their lawyer's deadline, forcing me into a literal fire-sale of the remaining apocalypse-themed merch. Unfortunately for Shell, this ham-fisted attempt at revenge has resulted in more sales in a week than I could expect in a year, allowing me to raise a protest-art war chest for the express purpose of pissing off Shell forever.

But why Shell? It’s true there are no good oil companies, but Shell’s greenwashing campaign leaves a particularly bad taste in the mouth, especially in contrast to its accelerating investment in fracking and other wildly destructive oil and gas extraction techniques such as shale oil, not to mention its history of brutal human rights abuses, aggressive lobbying against climate legislation and historic climate change denialism.

But of course there are other notable examples, BP’s ridiculous rebranding to ‘Beyond Petroleum’ in 2000 with its accompanying flower logo still sticks in the throat as a monumental work of greenwashing garbage, potentially unsurpassable by even the worst of oil company music videos.

But it’s the oil industry’s increasing attempts to position ‘natural’ gas as a replacement fuel for dwindling oil supplies that presents the longest-term threat. They clearly love the ‘natural’ in the name, but gas is only as natural as oil or cyanide and only slightly less dangerous. The fact Shell drop natural gas into their pop-agenda videos as one of the energy innovations they’ve developed alongside gravity lights and roadside wind turbines shows the entire conceit for what it is. 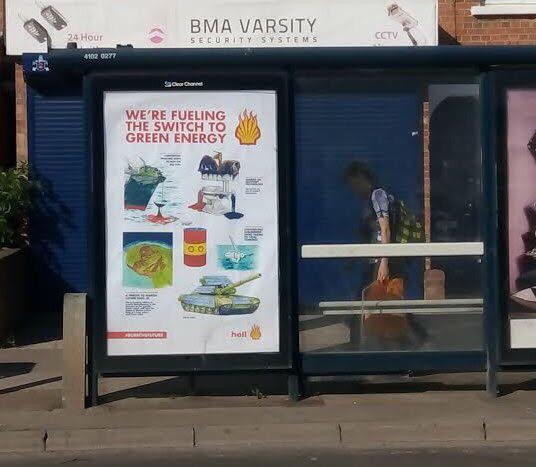 Oil companies like to talk about the ‘energy mix’ of oil and gas as well as renewables to divert the conversation away from abolishing their industry. But an accelerated transition away from and abolition of the oil and gas industry is the only thing that gives human civilization (alongside millions of other animal and plant species) a fighting chance of survival.

At the heart of all of this is the false idea that technological solutions alone can save us from the worst ravages of climate change. When scientists tell us that we need drastic global reductions in carbon emissions right now in order to survive, a few solar powered torches and recycling a bunch of plastic bottles into trainers isn’t going to cut it. What both we as a species and the planet desperately need is a radical restructuring of our economy, the likes of which was last seen during WWII.

We urgently need to nationalize oil and gas companies in order to force them to invest heavily in a replacement zero-emission energy infrastructure based entirely on renewables, as well as retooling the arms industry to manufacture the thousands of turbines and solar panels required for the task. If that all sounds far-fetched, imagine the prospect of many of the world’s most important cities being lost to the sea. That sounds far-fetched too, but it is an inevitable fact of the future history of humanity if we fail to act drastically and collectively against the oil and gas industry giants, before their suicidal business model kills us all.

Darren Cullen is an artist and writer based in London. He is best known for his 'Action Man: Battlefield Casualties' satirical action figures and 'Pocket Money Loans', a payday loan shop for kids that was featured at Banksy's Dismaland. His work can be found at spellingmistakescostlives.com

Are you in financial crisis, looking for money to start your own business or to pay your bills?, PayLATER Loan is given all types of loans at low interest rate of 2% Apply now via email at: ( paylaterloan@zoho.com ) OR WhatsApp ( +1 929 222 7518 )