School Strike for Climate Action > reports from across the world

We had demonstrations around the country:
Futures Forum: School Strike for Climate Action UK > Friday 15th February > reports from Parliament Square and beyond

It started with a school-girl from Sweden:
How a 7th-grader's strike against climate change exploded | Washington Post
Greta Thunberg: One Girl's Protest To Save The Environment | 10 daily

As covered on this blog:
Futures Forum: Climate change @ Davos

Although we don't know where it will go, as considered in a piece today in The Conversation, part of which is posted here:

School climate strikes: what next for the latest generation of activists?

School students across the UK (and the world) went on strike on February 15, leaving their lessons to protest the lack of effective action on climate change. Coordinated school strikes may be a novel tactic, but mass environmental activism isn’t. So will things be any more successful this time around?

A new wave of activism

This latest wave of climate action emerged in 2018, in the shape of Extinction Rebellion and its French cousin (or inverse) the gilets jaunes. Earlier in the year, Swedish schoolgirl Greta Thunberg had begun her solo “school strike” in Stockholm while, more or less simultaneously, activists in America launched the “Zero Hour” youth climate march.

Alongside this activism, the IPCC released its report on what it would take to keep global warming below 1.5℃, and Mother Nature lent a hand with blistering hot summers in the UK, California and (more recently) Australia.

But what goes up must come down, and the students will find that it is very hard indeed to sustain emotional and physical mobilisation for a prolonged period. Right now, this issue is roughly where the Parkland shooting protests were last year – newsworthy for now, but the media caravan will inevitably move on.

So for the latest generation of climate campaigners, my top four pieces of advice (see here for a longer list), based on both my activism and my time in academia, are as follows:

> Be aware of emotions. People won’t be persuaded just by being given more information on global temperatures or carbon budgets – psychological skills will matter too.

> Your parents are probably wrestling with fear (aren’t we all?) and guilt for not having sorted this out before you had to. Fear and guilt make can make people oscillate from action to inaction, pessimism to optimism.

> Traditional “social movement” activities (marches, petitions, protests, camps) have a short shelf-life. The media gets bored and stops reporting. Meanwhile, those in power learn how to cope with the pressure. Be very careful about getting drawn into the Big Marches In London syndrome. You’re going to need to innovate, repeatedly.

> Even though time is short, this is still a marathon, not a sprint.

But what would you say? How should we older people offer advice, when, who to, and about what? Suggestions in the comments please.

School climate strikes: what next for the latest generation of activists?

As reported in this blog:
Futures Forum: Tasmania is burning: "It's extremely inconvenient for any government that does not have a cogent answer for what they’ll do about climate change, to see the effects of climate change putting more and more people and homes at risk."

And as reported by the School Strike for Climate Action group in Australia: 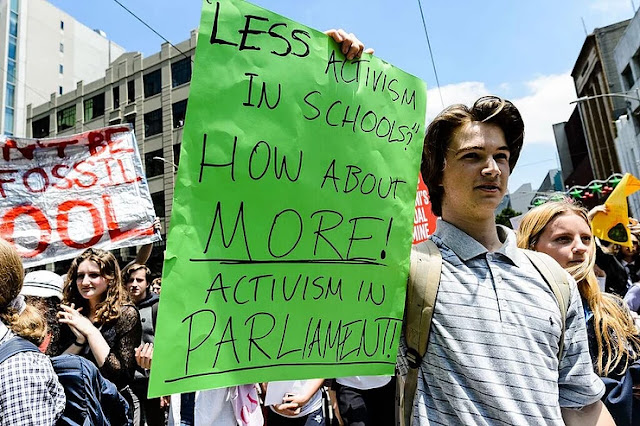 In response to today's front-page story in the Daily Telegraph about the School Strike 4 Climate Action, Australian school strikers have issued the following statement:
"School students started and school students are leading the School Strike 4 Climate Action.
We are a growing, global, school student-led network organising in our communities to bring about real lasting action on the greatest threat to our generation: climate change.
We are not an organisation, nor controlled or directed by any organisation. We are all volunteer school students, working on this cause because we care deeply about protecting people and our environment from the impacts of climate change.
We have reached out to a number of NGOs to support our work where they can. Climate change is a huge issue and we all need to work together.
A number of the school strikers for climate action also volunteer with the Australian Youth Climate Coalition (AYCC). No surprises there! AYCC is the country’s largest youth climate network and does fantastic work to support young people like us fighting for climate justice.
We are very excited to see huge numbers of students and our supporters join us for our Global #ClimateStrike on March 15. The climate crisis is here and it is hurting people now, so there has never been a more important time to demand urgent action from all politicians."
For any further enquiries: schoolstrike4climate@gmail.com