The meeting on Sunday in Bristol of the SOGS campaign
Futures Forum: Save Our Green Spaces... and sustainable development
highlighted concerns about planning applications that are growing throughout the country.

This is from last week's Observer, which questions the response by 'the authorities' to planning proposals in Shropshire: 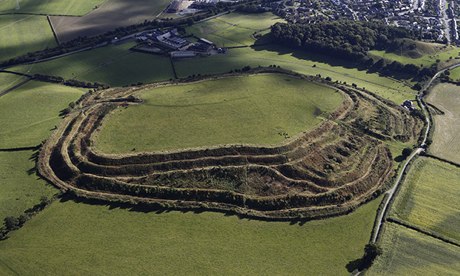 Campaigners have questioned the basis for the council's new homes target. "Shropshire council has acknowledged that the 2,600 figure is both arbitrary and inexact," said John Waine from Hoooh. "This is the sand on which they seem willing to allocate new homes, setting a precedent for future build around this and other Shropshire heritage sites."
Local people have pressed their MP, environment secretary Owen Paterson, to raise their concerns. A spokeswoman for Paterson said: "He never becomes involved in planning decisions, which are entirely the responsibility of Shropshire council. However, he always passes on the concerns of any constituents who contact him to the leader of Shropshire council."
Iron age hill fort threatened by plans to build 200 luxury homes | Science | The Observer
This video was put together by the SOGS campaign, about concerns for 'green spaces and green belt' in the South West:

A comment at YouTube mentions the RSS:
And now planning applications are going in around the south west. The Government office of the South West have directed Local Authorities to push on with their Core Strategies and to give any the RSS considerable weight when considering applications. Developers rub their hands with glee, but will they be putting up affordable sustainable homes - or get rich quick executive homes?

And yet whilst these Regional Spacial Strategies have been scraped, the housing targets remain:
Futures Forum: "Planning Minister Nick Boles said there was 'no excuse' for a local authority not putting a local plan in place."

This is not only a concern in the UK. There are campaigns about 'saving the green belt' happening internationally, most famously:

Wangari Maathai is a Kenyan environmentalist and political activist. In the 1970s, Maathai founded the Green Belt Movement, an environmental NGO focused on environmental conservation and women's rights. In 2004, she became the first African woman to receive the Nobel Peace Prize for her contributions to sustainable development, democracy, and peace.The Green Belt Movement (http://greenbeltmovement.org) organizes rural women in Kenya to plant trees, an effort that combats deforestation while generating income for the community and promoting empowerment for women. Since Maathai founded the Movement, over 40 million trees have been planted and over 30,000 women have been trained in forestry, food processing, beekeeping, and other sustainable, income-generating activities.Wangari Maathai also recommends: • Nature Conservancy (http://www.nature.org)• United Nations Environmental Programme (http://www.unep.org)

More on 'nimbyism' in the South-West and UK:
Futures Forum: Green Belts: the Seaton-Colyford 'green wedge'
Futures Forum: Going BANANAs: planning and NIMBYism
Futures Forum: How should the English countryside look in future?... "It's mad that we protect the countryside (where hardly anyone lives) and cram buildings into every nook and cranny in the cities which are already rammed full."
Futures Forum: Telegraph campaign: Hands off Our Land

And some very useful links from the SOGS campaign:

The South West Regional Assembly our unelected regional quango who approved and submitted the Regional Spatial Strategy to government in 2006.
Government Office for the South West, working with the SWRA on details of the Regional Spatial Strategy.
The South West Regional Planning Module, managed by South West Councils, collects and presents evidence to support planning policy making in the South West.
The Manuka Club All over Britain, local groups of concerned citizens are challenging plans for irresponsible development. The work of these local heroes goes unsung, and is often under-funded. The Manuka Club was set up to support them and to secure a living and healthy countryside for the enjoyment of everyone.
Every Action Counts, encouraging local involvement in environmental activities

GOSW have indicated that work on the RSS is about to begin again. Read their press release.
See how YOUR Council has responded to the RSS. Alice Ross of Save the Countryside has prepared a matrix to show what all the Local Authorities in the SW thought of the modified RSS proposals.
Links to the information supplied by the Government Office of the South West about proposed changes to the Regional Spatial Strategy
http://www.gosw.gov.uk/gosw/planninghome/691545/713860/?a=42496
The draft RSS made simple for the Executive Summary
http://www.southwest-ra.gov.uk/media/SWRA/RSS%20Documents/Final%20Draft/execsummary.pdf

What does the Barker Review mean? Let the kind people of The Times property section explain…
http://property.timesonline.co.uk/tol/life_and_style/property/article1039646.ece

A useful synopsis from Friends Of the Earth South Gloucester, of the housing numbers for Bristol, over 117,000 in twenty years.

Friends of the Earth have written a very clear briefing on Sustainable Housing …http://www.foe.co.uk/resource/briefings/sustainable_housing_mps.pdf

They also point out here that the South West RSS misses a great opportunity to achieve carbon targets…
http://www.foe.co.uk/resource/briefings/ducking_carbon_challenge.pdf

The CPRE shed some light on some of the myths surrounding housing and development, this report was written for the East Midlands but applies to us all. CPRE housing myths.pdf

Independent expert analyses commissioned by CPRE South West question the assumptions behind the emerging RSS. This four-page briefing provides the detail behind the letter and summary briefing sent to MPs in May 2008. CPREsbriefingMay08RSS.pdf

Everything you ever wanted to know about planning from the CPRE.

The Empty Homes Agency do great work to embarrass Councils into reusing empty homes – see how many homes your Council is leaving empty…http://www.emptyhomes.com/usefulinformation/stats/sw08.htm.

Do also have a look at their submission to the Affordable Rural Housing Commission…http://www.emptyhomes.com/usefulinformation/papers_publications/rural.html

Natural England have published some research on how green spaces benefit our health…http://www.nwph.net/phys/Publications/Benefits%20of%20Green%20Space%20for%20Mental%20Health%20v1.1.doc

Mental Health charity MIND shows the difference being outside can make to our state of mind… http://www.mind.org.uk/ecominds/Mental+health+and+the+environment.html

The physical and mental benefits of exercising in the country are all here…http://www.countrysiderecreation.org.uk/pdf/CRN%20exec%20summary.pdf