Is planning for our townscapes all about how it is presented?

This is the headline from the print version of an article from this week's  Guardian:

Capital looks to bikes, parks and pedestrian boulevards to move on from crisis 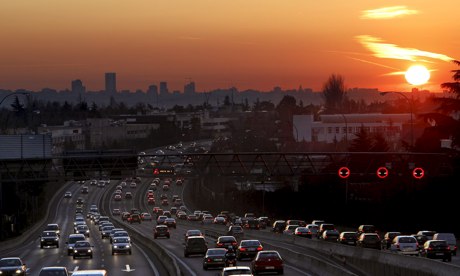 Madrid's clogged A6 road. 'The car won out over the pedestrian,' says a city councillor, who envisages a pedestrian-friendly capital. Photograph: Juan Carlos Hidalgo/EPA
It's been a tough year for Madrid. In September the city lost its third consecutive bid to host the Olympics. Months later a 13-day strike by rubbish collectors left rotting meat, vegetable peelings and plastic packaging piling up around the city. All this as the city continues to reel from an economic crisis that has shuttered more than 4,500 of its bars and hundreds of its cultural institutions.

But here is the very different headline from the on-line version - and it is exactly the same article. It depends what your take is on these matters...

Madrid's clogged A6 road. 'The car won out over the pedestrian,' says a city councillor, who envisages a pedestrian-friendly capital. Photograph: Juan Carlos Hidalgo/EPA
It's been a tough year for Madrid. In September the city lost its third consecutive bid to host the Olympics. Months later a 13-day strike by rubbish collectors left rotting meat, vegetable peelings and plastic packaging piling up around the city. All this as the city continues to reel from an economic crisis that has shuttered more than 4,500 of its bars and hundreds of its cultural institutions.
But now city officials say they have a plan to get Madrid's mojo back. If they get their way, it will soon be a city of grand boulevards, pedestrians and public transport rather than one plagued by dwindling tourism and crippling public-sector strikes.
It is part of the vision laid out in Madrid's general urban plan, a blueprint designed by the city every 15 or so years to guide its next decade of development. This time around, the city wants big changes. Car lanes will be replaced by bicycle lanes, trees will be planted to line the streets and green spaces across the city will be connected through a series of corridors.
"It's a plan that will take the corset off the city," said Paz González, the city councillor responsible for urban planning. "It's the 21st century – we can't have our city all tied up."
For the past eight months, she has paid close attention as more than 3,000 residents and 200 experts have weighed in with their opinions on Madrid's future. The result is a 4,000-page document that sketches a city of car-free neighbourhoods, ample parking for bicycles, and shops on the bottom floor of apartment buildings.
Vicente Patón, president of the conservation group Madrid, Ciudadanía y Patrimonio (Citizenship and Heritage), said this plan may set the city up for another disastrous run: "The truth is we're really worried." His organisation has spoken out against the plan's idea to remove the automatic heritage designation given to buildings more than 100 years old. "Around the world, cities are expanding their lists of protected buildings. But here, they're taking buildings off the list," he said.
The city is instead inviting proposals on what they can do with these buildings. "There's no business left selling houses or land in the periphery of Madrid. So what's left to exploit? The historical centre of Madrid." In these crisis-ridden times, he claimed, decisions on what to with the city's rich collection of historical buildings will now be made by the highest bidder.
González said the city had started setting money aside where possible but she called for the private sector to get involved. The answer, she said, lay in convincing more than just the locals to get involved in remaking the city. "Anyone who wants to come and invest in the city of Madrid, whether it's to renovate or build, these people will have an opportunity."

So, what is the 'true' picture of the promised development?
It clearly depends on your perspective - whether politicians promising to 'take the corset off' and take heed of the 'opinions' of residents - or fears of 'another disastrous run' or historical buildings going to the 'highest bidder'...

Residents' opinions were taken heed of... once the 'vision' had been established:

Major redevelopment plans for Exmouth seafront, which are at the heart of East Devon District Council’s (EDDC) vision for the town, have been backed by the council’s planning department.

A decision on outline planning permission for the £10million ‘Exmouth Splash’ scheme, which includes the realignment of Queen’s Drive, new watersports facilities, holiday accommodation and leisure facilities to the west of the Maer, will be made by district councillors next week. Ahead of the crucial meeting, the council’s planning officers have produced a report which recommends approval.
The report explains that the application has been arranged around five zones – a watersports centre, 250-space car park, fun park with indoor and outdoor facilities, Harbour View Café and old lifeboat station, and holiday accommodation – which could then be brought forward for detailed planning permission in stages, or all at once, depending on EDDC’s marketing process. It adds: “The principle of the redevelopment of the site for a range of leisure uses is considered to be acceptable and in accordance with … the adopted Local Plan, the adopted Exmouth Masterplan, and emerging … new Local Plan that all seek the redevelopment and improvement of the leisure provision on this part of Exmouth seafront.”

EDDC has previously said that if outline planning permission is granted, it will appoint a developer partner to work on the detailed plans. If these are then approved, after public consultation, work could start on site by the end of 2014.
Exmouth Town Council opposed the Splash in a majority vote at a meeting in September.
The decision on outline permission will be made by EDDC’s development management committee at the Knowle in Sidmouth, on Tuesday, December 10, at 10am.
Officers back seafront Splash plan - News - Exmouth Journal
www.eastdevon.gov.uk/devman-sched_101213-sched-7.pdf

Exmouth “consultation” on money from sale of Elizabeth Hall, Exmouth to Premier Inns

EDDC is considering using money from the sale of Elizabeth Hall for two regeneration projects:  Mamhead slipwayand the Queen’s Drive leisure area.
But no mention in the press release of consulting the people of Exmouth about whether they think this is a good use of the money.  And what happened to private investment – the mantra we constantly hear about?
Exmouth “consultation” on money from sale of Elizabeth Hall, Exmouth to Premier Inns | Sidmouth Independent News

Is the title of an article in today’s Guardian G2.

One paragraph:  Seasides were always about taking money off holidaymakers, but Thatcherism has pushed the tide out way too far.  Today, it’s too often about “profit centres”: if this piece of land on the seafront doesn’t make a big enough profit, let’s build something else on it, even if that means destroying the character of the resort.  In my 1979 AA Guide, Exmouth is described as a place that has “all the amenities of a popular resort whilst remaining free from excessive commercialisation”.  That just about holds true today, but won’t for much longer if East Devon District Council gets its way.  Despite a petition that raised 10,000 signatures, the council has sold Elizabeth Hall, a popular community facility on the esplanade that dates from the Victorian era.  It will be demolished and replaced by a four-storey hotel.  The council’s  ”masterplan” for the redevelopment of the seafront includes more “retail areas” and “a large privately-run play and recreation area.


Exmouth? Blackpool? Can you spot the difference?

A little late but here is some food for thought in Exmouth, courtesy of the Letters page of a recent Exmouth Journal:

Exmouth? Blackpool? Can you spot the difference? | Sidmouth Independent News

And then there is the 'redevelopment' further along the coast:

Seaton: EDDC votes to share the profits with Tesco but no affordable housing on the site | Sidmouth Independent News
Futures Forum: Tesco's in Seaton
.
.
.
Posted by Jeremy Woodward at 13:07