What is the price of milk? "It must be a crazy concept to keep borrowing money to produce something that almost all of us use and which is, somewhere along the line, making money for somebody."

Can we really continue farming the way we do?
Futures Forum: Sustainable food production and consumption

Can we really continue shopping the way we do?
Futures Forum: Can supermarkets ever be sustainable? ... 'Localising economies is a better way of making an economy more transparent and giving people more control.'

Can we really continue assuming that basics such as milk should always be so cheap?
Futures Forum: What is the price of milk?

Britain's dairy farmers have been asking these questions for some time - and have now made their opinions very clear:

Protester claims that supermarkets’ squeeze on dairy producers is going to put them out of business
TOM BAWDEN ENVIRONMENT EDITOR Friday 31 July 2015
Britain’s most militant farmer has revealed that his group plans to picket customers as they enter supermarkets in protest against the “squeeze” on milk prices, as he warns the situation is so dire that he could be forced to quit dairy farming within months.
In an interview with The Independent, veteran farming campaigner David Handley, who rose to prominence by leading fuel blockades in 2000, said he would no longer tolerate the supermarkets’ persistent chipping away of “farm-gate” prices.
Sixty-three-year-old Mr Handley, who has twice been voted farming personality of the year, said he is talking to the supermarkets to determine which ones are not “moving in the right direction” on dairy prices.
He expects to complete the audit around the middle of August, and will “name and shame” the worst offenders shortly afterwards.

Veteran farming campaigner David Handley has a 140-head Jersey herd at his Monmouthshire farm (Channel 4)
The campaign will also see members from his Farmers For Action campaign group standing outside supermarket entrances to inform customers about how badly the shops are treating milk producers. Food services groups and hotels could also be targeted.
UK’s most militant farmer says he 'will picket stores and tell customers truth about milk prices' - Home News - UK - The Independent
Militant farmers threaten to target processors 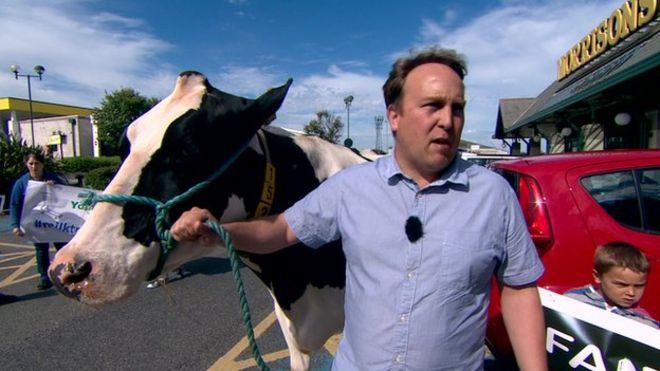 Michael Shadwick led the protest with a cow outside Morrisons in Bude
A group of dairy farmers has bought all the milk in two rural branches of Morrisons in protest at the price the supermarket giant pays for milk. They cleared the shelves at Morrisons in Bideford, Devon, and Bude, Cornwall, then demonstrated outside with a cow.
The farmers say Morrisons pays as little as 74p for four pints, which they argue is far too low. The supermarket chain said it had already agreed not to accept further cost price decreases from suppliers. The protest is one of several that have been staged across the UK in the past few days.
Milk protest at Morrisons sees farmers clear shelves - BBC News
Farmers in fresh protests over supermarket milk prices - BBC News


Dairy farmers are being screwed over, but nobody knows the best way to help
Milk must be making money for somebody. But it's certainly not the farmers who produce it

152 Comments
I have lived with my husband, a dairy farmer for almost two decades. Farmers often marry within a particular self-selecting community, which can make the gap between how they perceive themselves and how they are seen by other people in the country, quite wide. Maybe the fact that I don’t come from a farming background myself helps me to look at the current position of the dairy industry from a slightly different slant.
Whatever way you look at it. We are in trouble. At the moment, we are getting 18 pence a litre for our milk. This time last year, we were getting 30 pence. It costs at least 24 pence to produce a litre of milk.
It must be a crazy concept to keep borrowing money to produce something that almost all of us use and which is, somewhere along the line, making money for somebody.
I have had umpteen conversations in the past weeks with people who live outside the farming world, and they all want to help. The problem is, they don’t know how to. They don’t know whether they should buy more or less milk or boycott certain shops. They want to do the right thing but they don’t know what that is.Therein lies the problem. This most basic of commodities – milk – has been hijacked, and the politics surrounding it obfuscated to such an extent that every player, from supermarket to processor, can blame someone else. When all else fails, they can blame global economic factors.
Dairy farmers are being screwed over, but nobody knows the best way to help - Telegraph


A new Milk Marketing Board won't fix dairy price slump
Dairy farmers are getting milked but going back in time to 1933 won't guarantee them a fare price for their produce, writes Andrew Critchlow

8 Comments
Britain’s dairy farmers are in open revolt. This week has seen milk producers call for a boycott on supermarkets and they even laid siege to a major dairy distribution centre belonging to Morrisons. Their beef is simple. They are not being paid enough for the milk they produce by allegedly greedy supermarket chains which are more concerned with fighting their own industry price war than addressing the concerns of suppliers.
Some dairy farmers are now calling for a return of the Milk Marketing Board to safeguard the industry and guarantee them a fair price regardless of the international market. Established in 1933, the board acting as a buyer of last resort for farmers and essentially controlled prices at the farm gate. Most British consumers will still remember the organisation through its sponsorship of major sports events such as the “Milk Race”, which was a precursor to the Tour of Britain and the “Milk Cup” currently known as the Capitol One Cup.
A new Milk Marketing Board won't fix dairy price slump - Telegraph


Farmers step up milk price fight with Morrisons tractor blockade
Day of action planned for Friday in dispute over price paid to suppliers, which has seen supermarket milk supplies cleared out in ‘trolley dash’ protests 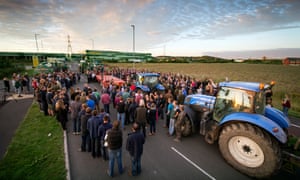 Farmers protest at the Morrisons depot in Bridgwater, Somerset. Photograph: Adrian Sherratt
Matthew Weaver Friday 7 August 2015
Comments 482
Farmers have stepped up their protests against supermarkets’ cuts in payments for milk, blockading a Morrisons distribution centre with tractors.
The protests come after famers urged consumers not to buy milk at Morrisons, Aldi, Lidl and Asda because three major milk processors – Arla, First Milk and Dairy Crest – all said they would cut the price they pay farmers.
Farmers have been protesting in UK supermarkets all week, but action was cranked up on Thursday night despite legal threats from supermarkets.
Up to 300 farmers protested at the Morrisons distribution centre in Bridgwater. They used tractors to blockade the entrance on the M5, preventing delivery vehicles from reaching the depot.
Farmers step up milk price fight with Morrisons tractor blockade | UK news | The Guardian


Milk prices fall to lowest level in five years
By Somerset Standard | Posted: August 08, 2015
Defra's latest milk price announcement in June shows prices have fallen to their lowest since April 2010 at 23.7ppl.
Nick Holt-Martyn, of dairy consultancy The Dairy Group, said the National Farmers Union was right to call the current situation a crisis.
Mr Holt-Martyn said: "Given the number of retailer aligned contracts and farmers on level pricing this suggests a lot of milk has been sold for less than 20ppl this spring. The stark reality is that for most farmers their milk price is not sustainable and despite what EU Commissioner Phil Hogan says the NFU is right to call this a crisis. For the UK there is the added burden of a strong currency of 1.4 per cent and rising, which means in Euros our average price compares well with EU prices. The UK has risen from tenth in the EU at the turn of the year to seventh.
"However in sterling terms the decline is 13.2 per cent in line with our dairy competitors in Ireland, Denmark, Netherlands and Germany. The recent Eurozone problems coupled with UK political stability has led to an increase in market confidence in sterling which is set to continue. Historically sterling has been strong, which has made Irish imports more competitive and undermining UK cheese prices."
Milk prices fall to lowest level in five years | Frome Standard

Farmers pile trolleys high with milk at a protest in Asda Yeovil yesterday.
FARMERS descended on Asda in Yeovil last night and stripped the shelved of milk and dairy produce.
The protest was designed to raised awareness of a national campaign against 'unfair' milk prices paid to farmers in the dairy industry.
VIDEO: Farmers milk protest at Asda, Yeovil | Western Gazette
.
.
.
Posted by Jeremy Woodward at 01:30