Sidmouth Beach Management Plan... Pennington Point... Alma Bridge... "Due to the environmental status of this site preventing any protection works, it is not possible for DCC to undertake the bridge replacement at its current position"

Alma Bridge on Pennington Point at the Eastern Beach of Sidmouth is a local icon:

A delightful little foot bridge spanning the River Sid in Sidmouth, it was named after the Battle of Alma during the Crimean War and was built to connect the west side of the river with the cliff path on the east.

It's very much part of the townscape:
Futures Forum: Alma Bridge: "lifeline" for residents and tourists alike

This is clear from the recent discussion on Streetlife:
Futures Forum: Sidmouth Beach Management Plan @ Streetlife

The project to 'do something' with the bridge goes back some time, however:
Futures Forum: 28th January 2003: "EDDC is proposing a coast protection scheme aimed at reducing the rate of cliff erosion at Pennington Point. The scheme would protect the properties located at the top of Salcombe Hill and the Alma Bridge."
Futures Forum: 23rd July 2009: "DCC supports the ‘hold the line’ policy option for continued investment in maintaining existing coastal defences to prevent flooding and erosion, and to leave undeveloped and open coast to evolve naturally."
Futures Forum: 24th April 2011: 'Popular Alma Bridge, a gateway to Salcombe Hill for a quarter of a million residents and visitors every year, is just 24 months and eight metres away from being lost forever, campaigning cliff-top residents fear'

There seems to be a need to blame someone for the delay in 'doing something':
Quango criticised for blocking Alma Bridge plans - News - Sidmouth Herald
Council calls urgent talks over cliff fears | Western Morning News
Report of discussions with Environment Agency, South West Water and EDDC June/July 2009

Meanwhile, the County Council has been carrying out a survey of the options:
Alma Bridge – new survey work to plan for the future | News centre
‘All options open’ for the future of Alma Bridge - News - Sidmouth Herald

As reported last week in the View from Sidmouth:

Sidmouth’s iconic Alma Bridge and the area around it will be the subject of a Devon County Council survey, after they accepted that the bridge is likely to be under threat at some point in the future.
The surveys, which will explore the erosion of the nearby cliffs, will provide a baseline on which to compare future erosion of the cliff face that protects the bridge.
DCC have confirmed that it is looking at a number of options to maintain the vital link for residents living east of the River Sid, and it will start monitoring erosion in the surrounding area late this month.
Devon County Council Cabinet Member for Highway Management and Flood Prevention, Cllr Stuart Hughes, said the additional survey work would help to determine when the bridge might eventually have to close.
“It is important that we work with all organisations to provide a safe, long term river crossing, and any planned investment has to be sustainable for the long term as well as being a good use of taxpayers money.
“I hope that EDDC’s Beach Management Plan can be agreed and put into place as soon as possible.”
If Alma Bridge becomes unsafe and cannot be repaired economically before the plan is put into operation, then the South West Coastal Path link can be kept by taking it over the River Sid at the ford using the existing footbridge at the end of Mill Street.
In the future, a bridge near the mouth of the River Sid would have to be less vulnerable to damage from the sea, and Devon is working with other organisations including EDDC, the Environmental Agency and Natural England to find a more workable solution.
Devon County Council, which is a member of East Devon District Council’s steering group for its Sidmouth and East Beach Management Plan project, is liaising with EDDC project officers so that the projects join-up.
The county council will be attending next week’s steering group meeting, where Alma Bridge will be on the agenda. Once the Beach Management Plan has been agreed, it will be used over the coming years to bid for money for its implementation.

SIDMOUTH: Iconic bridge is under threat | Pulman's View from Colyton

One of these options has been for the bridge to move upstream - as suggested five years ago:
New ‘Alma Bridge’ feasible for Sidmouth - Environment - Eastern Daily Press

The council has now decided on this, as reported in today's Herald: 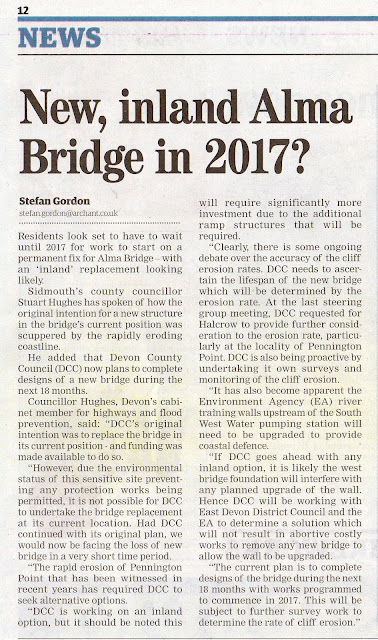