The Transatlantic Trade and Investment Partnership >>>> “I do not take my mandate from the European people.” >>> >>> but the petitions multiply

The Independent last year noted the lack of accountability:
Futures Forum: The Transatlantic Trade and Investment Partnership >>>> "I’d vote against TTIP, except, hang on a minute, I can’t."

Today it has done the same:

I was recently granted a rare glimpse behind the official façade of the EU when I met with its Trade Commissioner in her Brussels office. I was there to discuss the Transatlantic Trade and Investment Partnership (TTIP), the controversial treaty currently under negotiation between the EU and the USA.
As Trade Commissioner, Cecilia Malmström occupies a powerful position in the apparatus of the EU. She heads up the trade directorate of the European Commission, the post previously given to Peter Mandelson when he was forced to quit front line politics in the UK. This puts her in charge of trade and investment policy for all 28 EU member states, and it is her officials that are currently trying to finalise the TTIP deal with the USA.
In our meeting, I challenged Malmström over the huge opposition to TTIP across Europe. In the last year, a record three and a quarter million European citizens have signed the petition against it. Thousands of meetings and protests have been held across all 28 EU member states, including a spectacular 250,000-strong demonstration in Berlin this weekend.
When put to her, Malmström acknowledged that a trade deal has never inspired such passionate and widespread opposition. Yet when I asked the trade commissioner how she could continue her persistent promotion of the deal in the face of such massive public opposition, her response came back icy cold: “I do not take my mandate from the European people.” 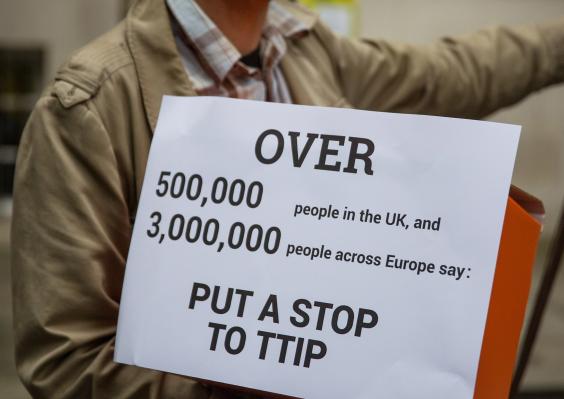 Campaigners against TTIP gather outside the European Commission in London, 7 October 2015
So who does Cecilia Malmström take her mandate from? Officially, EU commissioners are supposed to follow the elected governments of Europe. Yet the European Commission is carrying on the TTIP negotiations behind closed doors without the proper involvement European governments, let alone MPs or members of the public. British civil servants have admitted to us that they have been kept in the dark throughout the TTIP talks, and that this makes their job impossible.


What is TTIP?
In reality, as a new report from War on Want has just revealed, Malmström receives her orders directly from the corporate lobbyists that swarm around Brussels. The European Commission makes no secret of the fact that it takes its steer from industry lobbies such as BusinessEurope and the European Services Forum, much as a secretary takes down dictation. It's no wonder that the TTIP negotiations are set to serve corporate interests rather than public needs.
READ MORE
At some point in the next two years, the people of Britain will be asked whether they wish to leave or remain in the EU. I am proud to be a European, and have no truck with the xenophobic scaremongering of those little Englanders who would close our borders. I believe in a people’s Europe, a social Europe where we can work together with others across our continent – and outside it – to build a common future beyond the business interests of a tiny elite. 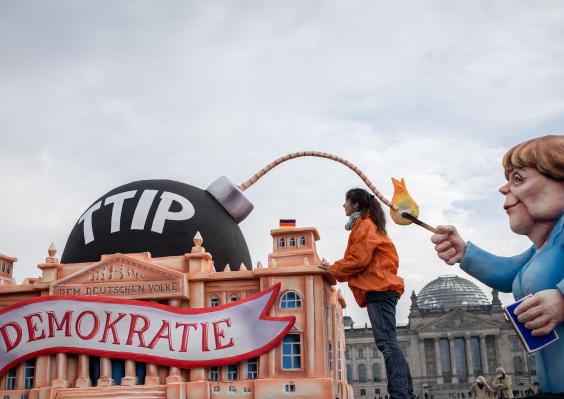 Activists work on a float showing Angela Merkel lighting a TTIP-bomb during a demonstration in Berlin, 9 October 2015
Yet the question we will be asked in the referendum is not whether we wish to remain Europeans, as if such a question could have any meaning. Rather, we will be asked whether we wish to remain subject to the institutions of the European Union, including the unelected Commission. As the people of Greece have learned through bitter experience, those institutions will not tolerate any reform or deviation from their blueprint of permanent austerity and corporate rule.
TTIP offers a glimpse of the nightmare that the European Commission has in store for each one of us. Cecilia Malmström has shown the contempt with which she and her fellow commissioners view the European people. We have been warned.
To add your signature to the European people’s petition against TTIP, or for more information, go to waronwant.org/ttip
John Hilary is Executive Director at War on Want. Follow him on Twitter: @JHilary

I didn’t think TTIP could get any scarier, but then I spoke to the EU official in charge of it | Voices | The Independent
TTIP free trade deal 'would remove people's rights to access basic human needs like water and energy' | Business News | News | The Independent

As well as the War On Want petition

français - deutsch - italiano - español - polski - português
What is TTIP? Why is it bad news?
TTIP's dodgy aim is to lift trade ‘barriers’ between the US and Europe but these rules actually provide some of our most crucial health, social and environmental protection.
TTIP is a massive trade deal, the biggest the world has ever seen. Faceless fat cats are prising away our democratic rights and power behind closed doors.
Campaign groups and coalitions of determined individuals are already shouting out against TTIP, ramping up the pressure for an immediate end to negotiations. Join us to demand trade policy that puts jobs, people, public services, animals and the environment before corporate greed.
Don’t let TTIP wash away our rights. Join the global fight to say #NOTTIP
What you can do:

... the 38 Degrees organisation has its campaign too:

THE CAMPAIGN AGAINST TTIP

Right now, there’s a deal called TTIP being worked out in secret between the US and EU. If could bring further privatisation of the NHS and allow big corporations to take our government to court - in secret.

Click to the left to find out more information about TTIP, email your MEP or MP about TTIP, download leaflets, or meet other people in your area who are campaigning on TTIP.