... has provoked a storm from across the political spectrum:
Ministers could start CHARGING for Freedom of Information | Daily Mail Online
An inside job: The committee examining how to reform the FoI act looks like a Conservative hit squad | Editorials | Voices | The Independent
Freedom of information? Don’t quote us | The Times


The Guardian view on the freedom of information commission: a very British farce

Ministers appointed a panel of establishment figures to advise them on FoI. Its recommendations could make it harder to root out inconvenient truths 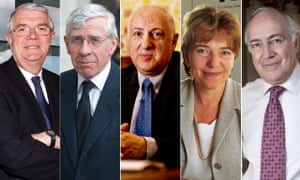 41
Save for later
War is Peace, Freedom is Slavery, Ignorance is Strength. Had the Party in Orwell’s Nineteen Eighty-Four been after a fourth slogan to add to the list, Openness is Opacity would have fitted well. But in Britain 2015, it is fast emerging as the operating principle of the so-called independent commission on freedom of information. “So-called” because it hardly seems independent, at least not in the sense of coming to its work with fresh eyes, unencumbered by preconceptions. So-called, too, because on the evidence thus far, it is less concerned with free information than imposing new restrictions upon its flow.
Before the commission was created this summer, No 10 began – just days after the Conservative election win – to float the idea of ministers acquiring new rights to block sensitive disclosures. The formal rubric which it works to, as set out in July by the Cabinet Office minister George Bridges, is plainly restrictive. Underneath some fine rhetoric about this being the world’s most transparent government, Lord Bridges tasked the commissioners with thinking about “robust protection” of sensitive documents, the “burden” of FoI upon the authorities, and the need for a “safe space” for official thinking – the same safe space argument which the original opponents of FoI had invoked all those years ago. If this remit did not make the agenda plain enough, the names of the commissioners surely did.
The five-strong panel included Jack Straw, who, though he had a hand in introducing FoI many years ago, has subsequently vetoed release of the cabinet minutes covering the Iraq war and called for wider restrictions covering policy development and ministerial communication. Alongside him is a former Tory home secretary of authoritarian bent, Michael Howard; Patricia Hodgson, who is now chair of Ofcom, a regulator which has previously complained about the cost of FoI compliance and its “chilling effect” on sound record-keeping; Alex Carlile, the former terror law watchdog who raged against the Guardian’s publication of Edward Snowden’s revelations about state surveillance; and, in the chair, the former Whitehall mandarin Terry Burns. To say that this bunch is more likely to take an insider’s view – to think first of the perspective of the bureaucracy being asked awkward questions, and only second of the citizen trying to root out inconvenient truths – is to put it mildly. Sir Humphrey would be thrilled by the panel’s “soundness”.
Last week, the commission set out its questions for consultation, with the emphasis on what new “protections” may be appropriate for the cabinet and other public bureaucracies, on what new vetoes may be required, and on the “burden” of FoI compliance, a discussion which could well end up in proposals for charges. The body held an official briefing for journalists, but – in a truly bizarre twist – barred them from reporting who had said what, or even who was present. So, in a very British farce, the debate about transparency is now being led by anonymous “sources close to the freedom of information commission”.
If FoI had one aim, it was meant to be forcing political decision-making out into the open. But Mr Straw this year let slip to undercover reporters that he thought some political work was best done “under the radar”. What an irony it would be if Britain’s transparency legislation ended up being neutered without detection.
The Guardian view on the freedom of information commission: a very British farce | Editorial | Comment is free | The Guardian


Meanwhile, the FOI Act is also under threat in its birthplace, the United States:
Ralph Nader: Monsanto vs. Freedom of Information Act

And generally speaking, it is local authorities who seem to complain the most about the FOI Act:

From A to Z (Asteroids to Zombies), the British Just Want the Facts


Heather Brooke, a British-American journalist who used the government access law in 2009 to obtain details of the expenses of members of Parliament, said she had earlier found a stark difference from the United States. Though information in the United States is frequently held back from reporters by federal, state or local governments, it is often done in defiance of an overall philosophy, if not actual laws, supporting the public’s right to know.
In Britain, when she requested information that she had routinely accessed in the United States — like public officials’ names or salaries — “it was as though I’d asked for the keys to a nuclear bunker,” she said. “Not just a ‘no,’ but a disbelief that I’d had the temerity to even ask.”
It was Tony Blair, then a young opposition leader poised to take the reins of government, who pioneered freedom of information legislation in Britain. “We want to end the obsessive and unnecessary secrecy which surrounds government activity, and make information available to the public,” he said in 1996.
It took nine years, but the law finally came into force on Jan. 1, 2005, permitting anyone to request and obtain information held by the public authorities.
Mr. Blair would later lament that this was one of his greatest mistakes in office, accusing the Freedom of Information law of being “utterly undermining of sensible government.”
“Freedom of information,” he wrote in his 2010 memoir, “A Journey.”“Three harmless words. I look at those words as I write them, and feel like shaking my head till it drops off my shoulders. You idiot. You naïve, foolish, irresponsible nincompoop.”
But Lord David Clark of Windermere, the cabinet minister in Mr. Blair’s government who drafted the Freedom of Information bill, said he remained happy that he was able to do so.
“The law was long overdue — Britain was among the last in a long line of Western countries to adopt F.O.I.,” he said.
In the decade since its adoption, the Freedom of Information act has been exposing incompetence, inefficiency and even corruption across more than 100,000 public bodies. Financial reports, expenses records, meeting minutes and private email correspondence have all been dragged into the public domain.
Still, the Freedom of Information law has been met with resistance. Local governments in particular complain that they lack the resources to process a growing volume of requests.
At Buckinghamshire County Council, workers last year spent 11,276 hours handling more than 1,700 requests, costing the taxpayers more than $400,000. The leader of the council, Martin Tett, complained of the cost in “times of austerity.”
“This is money we could be spending on other vital services, like children’s services or care for the elderly,” he said.
Mr. Blair and Lord Clark envisioned ordinary citizens primarily using the act. But according to Ms. Park, a substantial proportion of requests come from corporations “asking about subcontracting opportunities and so on.”
The authorities do not have to respond to what are described in the law, vaguely, as “vexatious” requests — those seeking information of a “frivolous” nature or deliberately aimed at disrupting the work of an authority. But Gareth Cosslett, a communications adviser at the Cumbria County Council, said local governments were wary of applying this clause too often as “it risks incurring the wrath of the information commissioner.”
From A to Z (Asteroids to Zombies), the British Just Want the Facts - The New York Times

Heather Brooke is skeptical, however:
FOI Britain is still 'suppressed and secretive' 10 years on | Media news

Looking to this part of the country, the East Devon District Council predictably complained 'that they lack the resources to process a growing volume of requests', following the report from the Information Tribunal:
Futures Forum: Transparency at East Devon: District Cabinet to consider report: Wednesday 15th July
Futures Forum: Knowle relocation project: and the cost of FOI requests
Futures Forum: The Freedom of Information Act and East Devon >>> >>> the story continues

Indeed, the District Council seems rather touchy about any inquiries which cause ‘aggravation and cost to the council’:
Campaigners decide to end bid to safeguard Knowle parkland - News - Sidmouth Herald

And there is certainly a perception that it is not willing to observe the spirit of the FOI Act:
Transparency vs. Secrecy « East Devon Alliance

To what extent can this reluctance to divulge be seen as a symptom of the 'deep state'?

Here's a provocative piece from the Cato Institute: Jason Kuznicki
Jason Kuznicki is the editor of Cato Unbound.
Politicians' Job Is to Be Noticed; the Deep State's Job Is to Be Ignored | Foundation for Economic Education
.
.
.
Posted by Jeremy Woodward at 15:21

The Dransfield Vexatious Case GIA/3037/2011 is the UK leading VEXATIOUS cases and has now exhausted the UK Legal System and now awaits the European Court of Human Rights.
Strangely, Lord Terry Burns and his cronies don't think the Dransfield vexatious case is worth reviewing despite a lot of discussions. According to Christopher Graham Dransfield is a Bad,Sad Madman and according to Dransfield, the ICO are in meltdown and Christopher Graham is a Psychopath.
The Devon County Council are throwing the kitchen sink and thousands of pounds of taxpayers money at Dransfield FOIA. Why?